Facebook Twitter Copy URL
Copied
Three debates for presidential candidates and two for vice presidential aspirants will be held. Those who skip the debates will be sanctioned.

Titled “PiliPinas Debates 2022: The Turning Point,” the series will be held on the following dates:

All five debate rounds will be held in Sofitel Philippine Plaza, a five-star hotel in Pasay City.

The first three debates will have a single moderator; the last two will have two moderators in a town hall format.

No leakage of questions

The Comelec reiterated that only general topics, not specific questions, would be given in advance to the candidates.

“When it comes to the process of finalizing the list of questions, everyone who will be involved in the process will be asked to sign a non-disclosure agreement,” Jimenez said.

“This is going to be a series of debates, so you’re not expecting all topics to be included in just one debate,” he added.

Jimenez said the Comelec would accept questions from concerned sector groups, but these submissions will still be vetted.

Jimenez said the Comelec was “very hopeful” it would be able to secure written commitments from the candidates within the week.

Ten people are gunning for the presidency, while nine others are running for vice president.

The son of the late dictator, Ferdinand Marcos Jr., has not committed to join the debates, while his running mate Sara Duterte has said she will skip the events.

On Monday, Jimenez said that, as a consequence, candidates who skip the debates will be denied streaming time on the poll body’s e-rally channel on Facebook.

Podiums assigned to them will also remain on the debate stage to remind the viewing public of their absence. 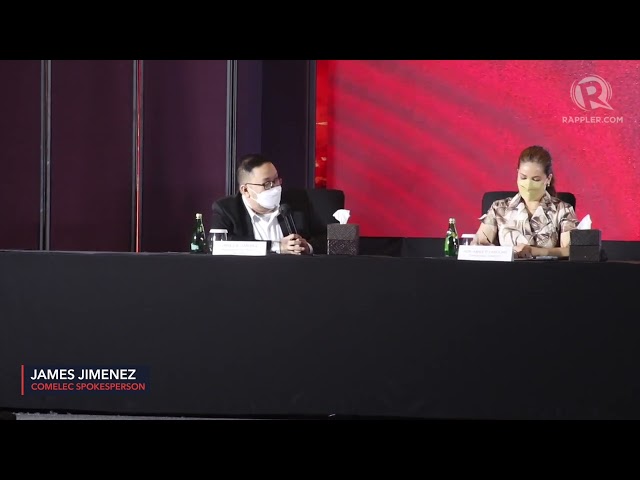 But acting Comelec Chairperson Socorro Inting still said she hoped all candidates would take part in the debates.

“A public debate is the only avenue wherein you may witness all candidates side-by-side with each other,” she said.

Inting led Monday’s Comelec’s signing of a memorandum of agreement with Vote Pilipinas, the production partner for the staging of the debate series.

Also present on Monday were commissioners Aimee Ferolino and Marlon Casquejo, as well as Ces Rondario and Lawrence Libo-on of Impact Hub Manila, the startup behind Vote Pilipinas. – Rappler.com