PROCLAMATION. This file photo shows scenes during the proclamation of winning senators in the 2022 Philippine elections by the National Board of Canvassers at the Forum Tent of the PICC in Pasay City on May 18, 2022. Angie de Silva/Rappler 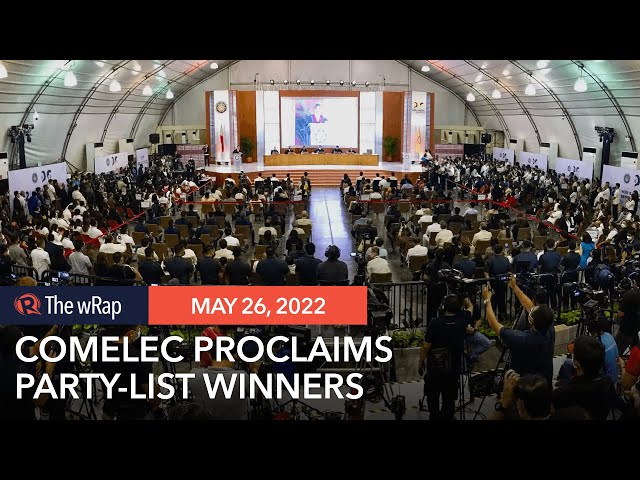 MANILA, Philippines – The Commission on Elections (Comelec), sitting as the National Board of Canvassers (NBOC), made official the election victory of dozens of party-list groups in the 2022 elections.

A total of 55 party-list groups, which secured a combined 62 seats, received certificates of proclamation in a ceremony in Pasay City on Thursday, May 26.

There are 63 seats allotted for party-list lawmakers, but the Comelec did not include United Senior Citizen during Thursday’s proclamation despite garnering enough votes to secure one seat due to its denied accreditation.

Kabataan and Gabriela were also proclaimed on Thursday, despite Commissioner George Garcia’s initial pronouncement that the Comelec would refrain from formalizing the election win of groups that still have pending cases against them before the poll body.

The two groups are still facing cases filed against them by the National Task Force to End Local Communist Armed Conflict, which seeks to nullify the two organizations’ accreditations.

Topping the party-list race for the second election in a row is ACT-CIS, which is also the only group to earn three seats in the 19th Congress.

Below is the complete list of party-list groups that took part in the 2022 elections, and the ones that secured at least one seat.

Longtime party-list mainstays in the House, namely Bayan Muna, Buhay, and Diwa, were denied a new mandate after failing to garner enough votes.

Anak Mindanao, A Teacher, Magdalo, OFW Family, and RAM, which are all part of the 18th Congress, will also not be part of the next batch of House lawmakers.

The lackluster showing of opposition groups in the party-list race casts a grim outlook on the future of dissent in the House under the incoming Marcos administration.

The Makabayan bloc, which had six seats in the 18th Congress, is reduced to a trio of lawmakers. Aside from the Antonio Trillanes IV-led Magdalo, Akbayan also failed in its comeback bid, placing 57th in a race in which 56 groups secured at least one seat.

The computation of party-list seats follows a complex formula in accordance with the 2009 Supreme Court ruling Banat vs. Comelec.

Contrary to popular belief, party-list groups also do not need to be marginalized, according to the Supreme Court in its 2013 ruling on Paglaum vs. Comelec.

Critics have said that the entry of political families and businessmen to the party-list system has bastardized an election process that was once envisioned to serve the marginalized. – Rappler.com