Facebook Twitter Copy URL
Copied
(2nd UPDATE) The PDP-Laban chaired by President Rodrigo Duterte is the dominant majority party despite having no standard-bearer. It will have priority access to election returns and polling places. 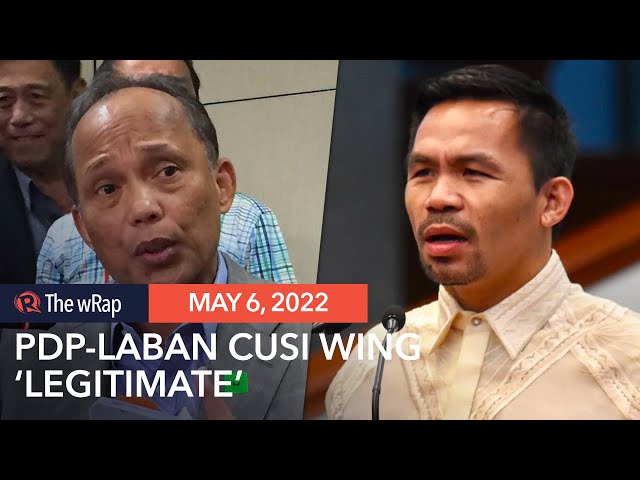 MANILA, Philippines – The Commission on Elections (Comelec) declared the faction of PDP-Laban, led by Energy Secretary Alfonso Cusi and chaired by President Rodrigo Duterte, as the legitimate wing of the Philippines’ ruling party.

The poll body’s Special Second Division, in a vote of 2-1, ruled in favor of the Cusi wing and against the faction led by Senator Manny Pacquiao.

The resolution released by the Comelec on Friday, May 6, showed commissioners Socorro Inting and Rey Bulay as the majority votes, and Commissioner Marlon Casquejo as the lone dissenter.

The ruling recognized the PDP-Laban’s national assembly on July 17, 2021, which achieved quorum, and which eventually unseated Pacquiao and Senator Aquilino Pimentel III as party leaders.

“The fact that he presided over the election of the new sets of party officers and committee chairpersons validates the entire process, making the above-enumerated officers as the duly elected officers of PDP-Laban,” the document read.

The Special Second Division was convened after the Regular Second Division was unable to break the tie between Bulay and Casquejo. Commissioner George Garcia, who was part of that division, inhibited himself from the review, as Pacquiao was once his client.

PDP-Laban has been named by the Comelec as the dominant majority party, which means it will have priority access to election returns, polling places, and canvassing centers.

Despite this, PDP-Laban’s Cusi wing has no standard-bearer after Senator Ronald “Bato” Dela Rosa withdrew his candidacy in November.

PDP-Laban’s Pacquiao wing does not also have a standard bearer, as Pacquiao chose to run for president under the political party PROMDI.

The Cusi wing has endorsed the candidacy of dictator’s son Ferdinand Marcos Jr. for the 2022 presidential race.

In a message to Rappler, Senator Koko Pimentel, chair of the “original” PDP-Laban wing, said his group will appeal the decision. Pimentel raised that the petition filed by the Cusi wing was “fatally defective.”

“It was filed for and on behalf of a political party (which is not a human being) without any board resolution authorizing its filing! Ang luwag naman ng Comelec kay [Secretary] Cusi pagdating sa requirements! (The Comelec is lenient with Secretary Cusi when it comes to requirements)” said Pimentel.

“The Comelec will be asked to explain to us why they referred the fatally defective petition to a Division without even informing us, as we are a party to the case. Why the little secrecy?” he added.

Pimentel reiterated his previous position that the Cusi wing are “outsiders.” He also called the Cusi wing members “fake members.”

“This issue should not be a case of “paramihan” (numbers). Paramihan, pero mga fake members naman! (They are a lot but they are fake members!) This case is an issue of following rules. Following the PDP-Laban constitution. Following Comelec rules of procedure,” he said.

“Only legitimate PDP-Laban members should be allowed to resolve this issue. The ‘padding’ of the membership by outsiders and complete strangers to the party should not be allowed,” he added

PDP-Laban was President Rodrigo Duterte’s political vehicle when he ran for the top post in 2016. Five years later, he would deride PDP-Laban as a “father-and-son party” before he joined it.

PDP-Laban was founded in the early 1980s to fight the Marcos dictatorship, yet it was Duterte, chair of the ruling party, who gave Ferdinand Marcos a hero’s burial in 2016.

The Pimentel wing also protested the Cusi camp’s endorsement of Marcos Jr., adding that Cusi and their members are “total strangers” to the party. – With reports from Aika Rey/Rappler.com