Ten aspirants for national elective posts for the 2022 polls officially sought to substitute for those who voluntarily withdrew their candidacies from October 9 to November 15, or the period that the Commission on Elections (Comelec) made such an option available.

Based on an updated Comelec list that was sent to reporters on Tuesday, November 16, a total of 22 people withdrew their certificates of candidacy after submitting their papers during the COC filing week from October 1 to 8.

The most notable withdrawals include:

The rest in the list of withdrawals were obscure personalities who were eventually replaced by political heavyweights. Critics have called them “placeholders” ahead of the substitution deadline, and the practice has sparked debates on whether they are mocking the elections.

The most notable substitutions include:

(Editor’s note: The table initially placed Sara Duterte-Carpio as a substitute for Anna Velasco instead of Lyle Uy. The table has been updated.)

Watchdog Kontra Daya on Monday decried the substitution circus that played out in the recent days.

It urged the poll body to “redeem itself” by declaring the supposed placeholders as nuisance candidates.

“The disastrous political spectacle these past few weeks could have been avoided if the Comelec declared as nuisance candidates those who were clearly placeholders based on the public statements either by themselves or by the officials of political parties they represent,” the group said on Monday.

Comelec spokesman James Jimenez had said in October that an acknowledgment by a person or a party that they are resorting to the “placeholder” strategy is not enough basis to cancel their candidacy papers.

“A mere declaration to the contrary wouldn’t, in my opinion, be sufficient to overcome the intention to run which is manifested in the verified certificate of candidacy (COC),” Jimenez had said. “The lack of a bona fide intention to run needs to be proven.”

On Monday, Jimenez acknowledged that the increase in the number of aspirants availing of the substitution option has become more apparent in the latest election cycle.

“Substitution has been going on for a long time. It’s been part and parcel of the practice in Philippine politics. Maybe it just became more prominent now precisely because it is played out at the highest levels,” Jimenez said in a press briefing.

“Before, it was rare that you would see that on the national level,” he added.

Asked whether the Comelec seeks to have substitution regulated, Jimenez said that it would be up to Congress.

“The Comelec will abide by what Congress passes, but as far as the Comelec is concerned, substitution remains a necessary and valid procedure,” Jimenez said. 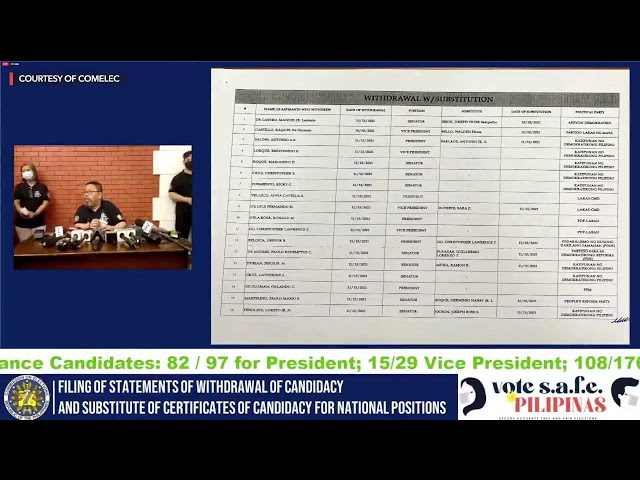 Duterte was perhaps the most high-profile case of substitution for the elections in the Philippines. In 2015, the then-Davao City mayor substituted for a candidate in order to run for president of the country. – Rappler.com