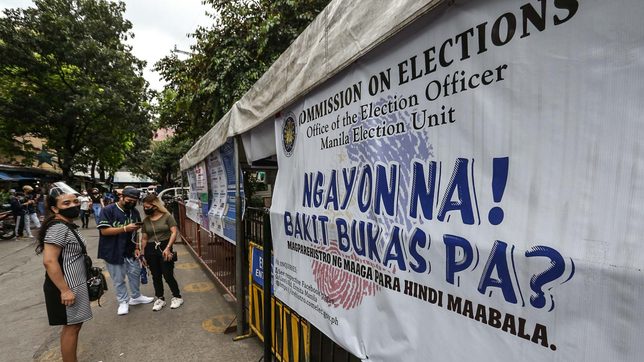 FOR 2022. The Commission on Elections resumes voter registration in Metro Manila on May 17, 2021.

The Commission on Elections (Comelec) has expressed concern that the names of people who died of COVID-19 may plague the poll body’s list of voters in the 2022 national elections.

During a Comelec briefing organized by Vera Files on Thursday, May 20, Jimenez said such could be the case since relatives of COVID-19 fatalities may not have updated their loved ones’ voter registration records.

“Recently, I suffered a death in the family, and I didn’t even report it to the Comelec,” Jimenez said. “Paano pa kaya iyong ibang tao na hindi naman top of mind ang voter registration (How much more those who don’t have voter registration on the top of their mind)?”

Jimenez said he was bringing to light the issue of dead voters as early as now, warning it may be a “nuance that will be lost in the public” come 2022.

“It is not difficult to find someone who will talk at length about how everything is so corrupt because my dead relative is still there. And you will not run out of pundits who will make jokes at the expense of the process simply because someone dead is on the list,” he noted.

In the Philippines, the public has become wary of “ghost voters,” amid fears they are being used by political camps to favor certain candidates.

Asked whether the Comelec can be more proactive in purging the names of dead voters on its list, Jimenez said yes, but pointed out there are limitations as to what the poll body can do.

He said the Comelec relies on the data from the local civil registrars, which might not also have updated information about people who died since the pandemic began.

A 2011 Comelec resolution requires local civil registrars to submit to the local elections officer a list of residents who died.

But Jimenez said some complicated scenarios could impede efforts to update the voter roll.

“After that, kailangan  pang mag-inform iyong local civil registry sa amin (Then the local registry still has to update the Comelec),” he added.

Purging “ghost voters” from the voter roll has been the Comelec’s perennial headache every election season.

The poll body has reminded the public time and again to notify local Comelec offices when a loved one who was a registered voter already died.

For the 2022 elections, the Comelec already delisted over six million voters as of February 2021 after failing to vote in two consecutive elections. — Rappler.com