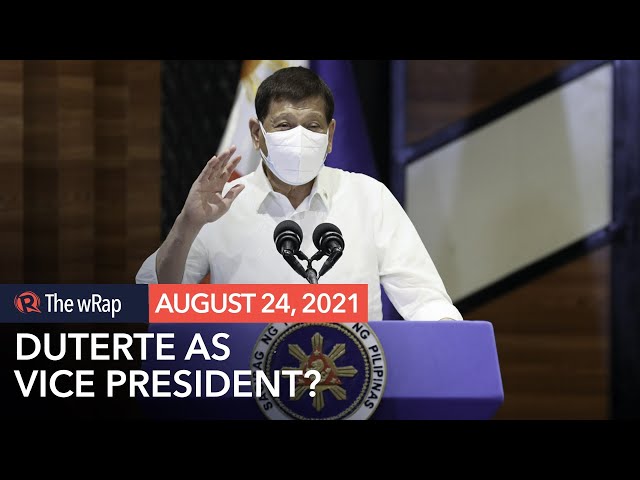 President Rodrigo Duterte has accepted the nomination of his party PDP-Laban to run for vice president in the 2022 elections.

Nograles said Duterte “accepted the endorsement” of the party and “agreed to make the sacrifice and heed the clamor of the people.”

Nograles said the President made the decision following calls from PDP-Laban councils from the regional to the barangay levels that want a “transition of leadership that will guarantee continuity of the administration’s programs during the past five years.”

Amid strong criticism of the Duterte administration’s weak pandemic response and its slow vaccination drive, Nograles said that the party councils want Duterte to seek the vice presidency to ensure that the government’s COVID-19 vaccination program “will be sustained in the critical stage of the pandemic.”

Duterte earlier said he would run for vice president to avoid lawsuits – a claim debunked by lawyers and legal experts.

At least three party sources said Duterte announced the decision during a Malacañang meeting with party president and Energy Secretary Alfonso Cusi and other party officials on Monday night, August 22.

He said the latest developments will be among the agenda at the PDP-Laban national convention on September 8, at the San Jose Del Monte Convention Center, in San Jose del Monte, Bulacan.

PDP-Laban earlier endorsed Duterte’s most trusted aide, Go, to be its presidential bet but the senator has yet to announce his decision. – Rappler.com