PDP-LABAN CHAIR. President Rodrigo Duterte delivers a speech in Malacañang on May 19, 2021.

President Rodrigo Duterte called on his allies in ruling party PDP-Laban to “stand together and remain united” as factions within the party clash just a year before the 2022 presidential polls.

“Again, I call on all of our party mates to stand together and remain united, not by personal interest but by our principles and values as we chart the future of our party and the rest of the nation. Congratulations at mabuhay ang PDP-Laban (and long live PDP-Laban),” said Duterte.

The President wore a plain white shirt for the video, which ran for just around a minute.

PDP-Laban’s national council meeting pushed through on Monday despite attempts of acting party president and Senator Manny Pacquiao to stop it from happening.

But Pacquiao had to stand down after Presidential Spokesperson Harry Roque said no less than Duterte himself ordered Cusi to call for the meeting.

The battle of the Pacquiao, Cusi factions

The squabble between the Pacquiao and Cusi factions in PDP-Laban was very much evident during the proceedings.

Minutes before Duterte’s message was played on-screen, Negros Oriental 3rd District Representative Arnie Teves tried to raise a point of order several times. But Cusi, who was presiding over the proceedings, kept on ignoring him.

“Mr. Chairman, why are you muting me when I am raising a point of order?” Teves can be heard saying.

Teves was only recognized after the PDP-Laban members adopted the motion of Eastern Samar Governor Ben Evardone to adopt their agenda for the day.

Teves then reiterated Pacquiao’s argument that the National Council should not be meeting since the acting PDP-Laban president did not call for it.

Lambino said the ruling party has yet to elect a new secretary-general after the man who previously held the post, Davao del Norte 1st District Representative Pantaleon Alvarez, bolted PDP-Laban in November 2020.

Munsayac told the Cusi faction to “cease and desist from pursuing and implementing their baseless, divisive, and unauthorized quasi-secret plan.” 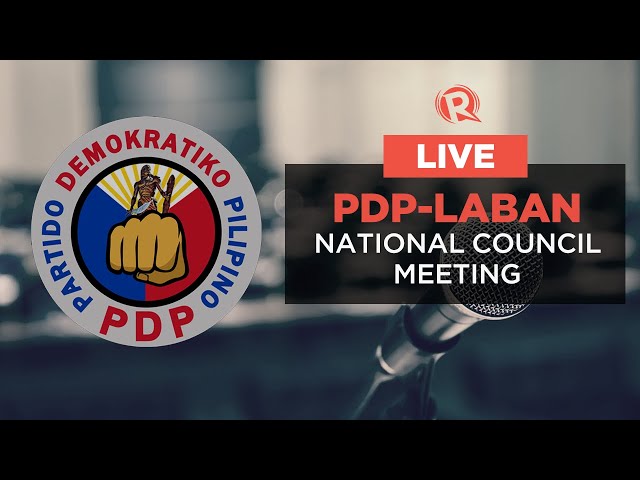 These developments are reminiscent of the party dynamics in 2018 to 2019, when PDP-Laban struggled for stability and survival following infighting among factions and the external threat from presidential daughter Sara Duterte’s Hugpong ng Pagbabago.

Key PDP-Laban stalwarts – among them members of Duterte’s Cabinet – were present during the party’s National Council meeting either in person or via Zoom.

She may end up going head to head against Pacquiao should both of them pursue their rumored presidential bids in 2022.

Most of the House members who joined PDP-Laban’s national council meeting on Monday are known allies of Velasco and Sara Duterte. – Rappler.com