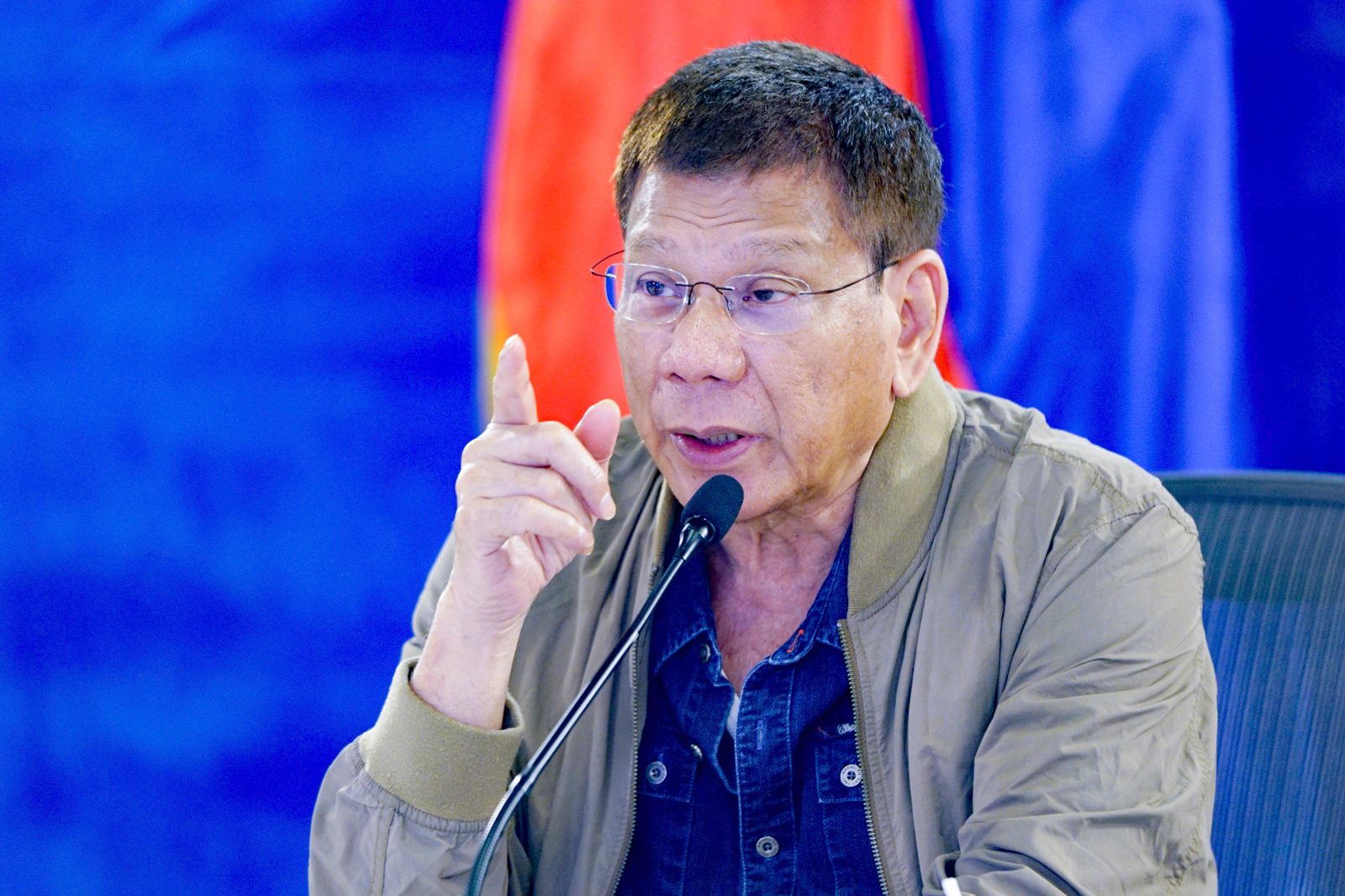 Facebook Twitter Copy URL
Copied
President Duterte seeks to regain control of the 2022 race the way he knows how: by throwing accusations and creating a ruckus

MANILA, Philippines – Clearly, Rodrigo Duterte is not going to make a quiet exit.

In the last few months of his term, when the whole nation is fixated on who will be his successor, President Duterte will not just sit back and let the world move on.

His remarks on Monday, January 24, showed he had fireworks planned, and the presidential candidates had better watch out.

“I’d like to start talking about elections and candidates in due time. Maybe in the last month of – I will personally name the candidates and maybe what’s wrong with them,” said Duterte, putting an ominous twist to his concluding message at an evening Malacañang meeting about pandemic response.

Some presidential candidates have reacted. Vice President Leni Robredo says she welcomes any new information about candidates “as long as they are true.” Labor leader Leody de Guzman dismisses it as Duterte’s ploy to be “relevant.”

Manila Mayor Isko Moreno’s campaign manager Lito Banayo says any upcoming Duterte tirade is “no cause for concern,” and that the President is free to say whatever he wants.

Judging by his habits, Duterte will likely lay out these “exposés” or his criticism of the presidential candidates during his weekly “Talk to the People.” Shortened to “TTTP” by Palace reporters, this was supposed to be footage of meetings devoted to pandemic response, but the meetings quickly evolved into no-holds-barred rant sessions about anything that got the President’s goat.

Duterte could also engage in negative campaigning when he physically campaigns for PDP-Laban candidates in their localities, as he had promised to do last November 24.

Duterte also said something about a person who drinks too much, but it could have been merely his metaphor for his manner of judging people, and not a reference to a candidate.

(I am the President and I get all the information from everybody, and not only that, from personal experience, I can see it. I’m not saying I’m better. From observation, you can see it. It’s like a person who drinks, you can tell when he’s had too much. Then the person gets into a fight, becomes aggressive, says hurtful things, thinks people owe him something.)

Then Duterte made tantalizing reference to the sole presidential aspirant with whom he could not find fault.

(But of all the candidates – well, except for one – I see they have negative issues.)

Duterte promised to put names to his accusations “in due time.”

Duterte is a one-trick pony.

His latest gambit is one we’ve seen many times before: colorful accusations about critics or enemies that get the public riled up and make Duterte appear like an agent of chaos.

“This is a President who has never ceased in campaigning, he has never gotten down from the campaign pulpit…. He’s always after his enemies of the day,” University of the Philippines political science professor Aries Arugay told Rappler. (Listen to our interview with Arugay below.)

Duterte is notorious for making inaccurate, even baseless, allegations about political enemies and critics. His infamous “narco lists” were riddled with inaccuracies, even prompting Duterte to distance himself from them after a mayor included in the list got killed. After Malacañang publicized a diagram of a supposed “ouster plot,” the justice department itself said it was insufficient basis to launch an investigation into the lawyers and journalists allegedly behind the scheme.

Duterte released the drug lists and diagrams months before the 2019 elections, prompting groups to claim he was using them for political ends.

Even Duterte’s “restraint” in leaving out the names of candidates in his January 24 accusations is laughable.

Weeks and months before, he already started lobbing criticisms or vague claims against Ferdinand Marcos Jr. (“spoiled brat,” “cocaine user”), Isko Moreno (“That’s presidential training, to strip”), Manny Pacquiao (corruption allegations, “liar”), and Panfilo Lacson (“Are you honest?”). As for Vice President Leni Robredo, she’s been the subject of his rants and misogynistic teasing since the early days of his presidency.

What will be different about his next accusations about presidential bets is they will be made by a sitting president who has not endorsed any candidate.

“The thing with a president having no endorsed candidate is that it gives him room to conduct negative campaigning against all the candidates without receiving the negative backlash…. He can do it with impunity because there will be no consequences because he did not endorse anyone,” said Arugay.

Duterte’s past accusations were made when there was still a chance either his daughter Davao City Mayor Sara Duterte or his right-hand man Senator Bong Go would run for president.

But they both decided otherwise, leaving Duterte with no one to endorse.

In past elections, the sitting president always had a dog in the fight. In this way, they could actively participate in the process of electing their successor.

The candidate endorsed by the president didn’t win most of the time, but at least it was clear to the public where the current president stood and where his or her loyalties lie.

Shut out by his failure to secure a successor to endorse, Duterte is nevertheless determined to influence this year’s biggest political event in the way he knows how: creating a ruckus.

“The motive is to simply throw a monkey wrench to the entire competitive process that we are currently having,” said Arugay. “[Duterte] is a spoiler. In a way, it seems like the message he wants to convey is: what you have is a sorry bunch of applicants to the presidency.”

Duterte on January 14 even teased that he’d become a noisy commentator during the next administration if a problematic candidate wins the presidency.

“Kung ito maging presidente, baka mapilitan ako araw-araw magyawyaw,” he said. (If this person becomes president, I might be forced to rant every day.)

In contrast, his predecessor, Aquino, promised he would refrain from making comments about Duterte’s presidency for one year to allow Duterte to adjust to the job.

He admitted this himself last Monday, but tried to portray himself as someone forced to expose candidates’ faults for the good of the country.

(I don’t have a reason to look for an enemy. But I’m driven by a sense of – I could just keep quiet so the next president won’t be my enemy.)

Certainly, the President is not blind to the looming shadow of the International Criminal Court investigation and all the cases he could face in relation to his drug war and his government’s pandemic contracts. His successor would have the power to pursue these cases or abandon them.

While a conventional politician wouldn’t employ Duterte’s “destroy them all” strategy, Duterte knows only too well that backtracking and dramatic reversals are options always available to him.

“He knows that, ‘I can say things now, but you’ve given me a lot of room before to contort, to change, to reverse, to contradict myself. Basta ako, sasabihin ko ‘yung gusto ko ngayon at bahala na siguro si Batman sa susunod,’” said Arugay.

(But I will say what I want now and leave what happens next to Batman.)

Given Duterte’s significant, albeit reduced, popularity, what he says about the candidates could influence votes, especially those of his die-hard supporters.

Duterte would not be the only Philippine president to engage in negative campaigning. Aquino was critical of Duterte in the 2016 elections. But, unlike Aquino, Duterte has no Mar Roxas to defend, and he seems to be preparing for a free-for-all demolition job instead of strategically targeting specific candidates.

Perhaps the aspirant biting their nails the most in dread of Duterte’s exposé is Isko Moreno, who has made it abundantly clear in the last few months that he would like the President’s endorsement.

“The funny thing about courting is, if you don’t get it, it backfires. It has a boomerang effect because it somehow tells you that you’re not being taken seriously, like you’re a rejected applicant,” said Arugay.

But whatever claims Duterte throws into the presidential boxing ring could be used by the candidates themselves against their rivals. The unique thing about a presidential allegation is that candidates who use it for their ends can deflect backlash because they can easily say, “I didn’t make the accusation. The President did.”

If Duterte’s claims are pure unfounded politicking, the biggest losers will be the Filipino people who will have more noise to block out if they are to make informed decisions in May.

Then, again, Duterte’s “noise” could be just the thing to test the candidates’ mettle and reveal their true character. – with reports from Mara Cepeda and Jairo Bolledo/Rappler.com