2022 ELECTIONS. Son of dictator Ferdinand Marcos Jr runs for president of the Philippines.

ILOCOS NORTE, Philippines – Progressive peasant and farmers’ groups in the Ilocos region have been feeling the brunt of the intense crackdown of the National Task Force to End Local Communist Armed Conflict (NTF-ELCAC), a situation that the groups expect to continue if Ferdinand “Bongbong” Marcos Jr. would be elected as president in 2022.

“There is already a Marcos-Duterte alliance – Duterte idolizes the dictator, so it means there won’t be any difference,” Genaro dela Cruz of the progressive Alyansa dagiti Mannalon ti Ilocos Norte (AMIN) told Rappler in Ilocano in a recent interview.

Under so much heat from the local ELCAC in the region, AMIN members asked not to be photographed nor filmed during the interview held in Laoag City, but consented to publishing their names.

Marcos, a former governor of Ilocos Norte, has unequivocally thrown his support for the NTF-ELCAC.

In a statement on Monday, January 17, Marcos said: “Maganda ang NTF-ELCAC.  Even if nabawasan ang kanilang budget, hindi nagbago. Nakakatulong talaga. I think we should continue that. It is something that I see na may effect na medyo maganda at nabibigyan ng pagkakataon maghanap-buhay and to rejoin the society.”

(NTF-ELCAC is good. Even with a smaller budget, they were able to continue helping out and I think we should continue that. It is something that I see that has a good effect and gives people the chance to rejoin society and have jobs.)

NTF-ELCAC has been on the forefront of an intense crackdown on activists, triggering court actions to stop baseless red-tagging. The Supreme Court even scrapped the power of judges to issue remote warrants following the killing of activists in police operations.

Many red-tagged individuals have been arrested, jailed, and killed under the Duterte administration.

For Antonino Pugyao, chairperson of the Solidarity of Peasants Against Exploitation for Ilocos and La Union, the red-tagging started after he appeared at a House of Representatives hearing in 2018 which investigated the alleged misuse of provincial tobacco funds of then-Ilocos Norte governor and now Senator Imee Marcos.

Pugyao had told a House panel that contrary to Imee Marcos’ claim, farmers like him had not received any benefits from the proceeds of the tobacco excise tax.

Pugyao told Rappler that after the hearing, barangay officials visited his office in Ilocos Sur and brought him to the barangay hall. There, a man who introduced himself as an Army officer interrogated him for four hours and forced him to surrender.

Surrender is a term used by the government when they approach people they suspect to be communist rebels, to give up arms and join civil society. Testimonies of surrenderees are later used to boost legal cases against the most prominent activist groups and personalities.

“Until now, even my family and my children are harassed. My youngest child is harassed, agents go to their school to ask where I am,” Pugyao told Rappler in Ilocano.

Glizebeth Dalo of AMIN said their home is frequented by people who introduce themselves as agents to either persuade her to surrender, or convince her husband to surrender her in exchange for P60,000.

“Four times they went back, so we wrote an affidavit that I am not an NPA (New Peoples’ Army) and submitted it to the barangay captain just to protect my relatives. If any of my relatives are harmed, I said in my affidavit that the agents are suspects,” Dalo said in Ilocano.

Activists and political dissenters alike were jailed, abducted, tortured, and killed during Martial Law, under the dictatorship of Marcos’ father and namesake.

“If they continue in their wish to overthrow the government by violent means, how can I be on their side?  Besides, the ideology that they are espousing no longer has much support,” Marcos said.

The group Campaign Against the Return of the Marcoses and Martial Law (CARMMA) said of Marcos, “Like father, like son.”

“Red-tagging and its consequent warrantless arrests, planting of evidence, trumped-up charges, imprisonment and torture – these are all the trademarks of the dictator Marcos’ regime. In courting the military and NTF-ELCAC this early in the game, Marcos Jr. has only succeeded in exposing himself,” CARMMA said in a statement Tuesday, January 18. 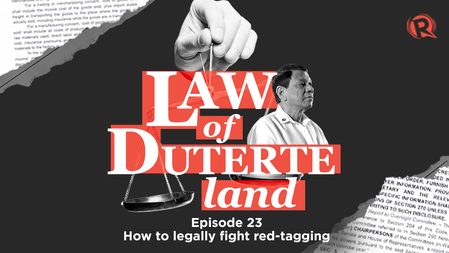 Where Marcos is categorical for his support for NTF-ELCAC, Vice President Leni Robredo has been criticized for her statements on the issue.

Robredo has to balance a fragile alliance with opposition members from the Left, and their supporters.

“I agree with the help that is being given to really incentivizing barangays with the barangay development fund, I’m all for it. What I don’t agree with is [if the] task force becomes so powerful that it is already used to harass,” Robredo said.

Robredo’s tempered position on the NTF-ELCAC, which she first expressed during a security briefing given to her by military generals in November, did not sit well with progressive groups. Robredo had said at the time that she supported the idea of tapping local governments for projects to address the root causes of the insurgency problem, including social injustice and inequality.

During the last round of budget hearings, the Senate found that only 1% or 26 out of over 2,000 NTF-ELCAC projects were completed. Despite threats to severely slash its budget, Congress still allotted P17 billion to NTF-ELCAC for 2022. – Rappler.com