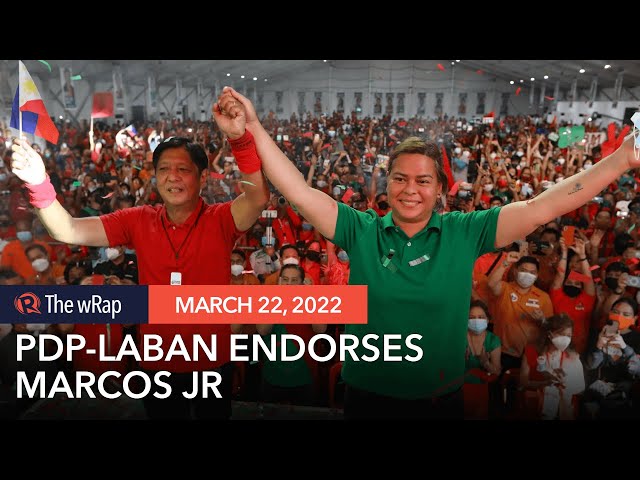 On Monday, March 21, PDP-Laban signed a resolution endorsing Marcos’ bid, after he received the “most endorsements from several local councils.”

The Cusi camp officially announced it on Tuesday, March 22.

The Cusi faction is chaired by President Rodrigo Duterte. Duterte was not among those who signed the resolution. Eastern Samar Governor Ben Evardone, the party vice president for the Visayas who is backing the presidential bid of Vice President Leni Robredo, also did not sign the resolution.

It is still unclear if the President would also endorse Marcos Jr. though he has been teasing the public about whose candidacy he would be backing.

Back in November 2021, Duterte had even belittled Marcos Jr. as “spoiled” and a “weak leader,” citing this as the reason why he didn’t want PDP-Laban to link arms with Lakas-CMD, which is backing the tandem of Marcos Jr. and Davao City Mayor Sara Duterte. PDP-Laban endorsed the presidential daughter’s vice presidential candidacy in December 2021.

Cusi said on Tuesday that the Office of the President would be in a better position to respond to questions on whether Duterte would endorse Marcos Jr.

Asked the same question, Sara Duterte said: “I cannot speak for the President. I do not know what he’s thinking right now.”

The Marcos camp thanked PDP-Laban “for joining the bandwagon.”

On the sidelines of their sortie in Dasmariñas City, Cavite, Marcos Jr. described the PDP-Laban faction’s endorsement as an “important step” towards unity.

“Ang bagong development na ito (This new development), this will consolidate the forces of unity so that we can continue to work against those who would want to divide Filipinos against each other,” he said.

On Wednesday, March 23, Senator Bong Go, the longtime aide of President Duterte, said the chief executive and Marcos had met over the weekend.

Speaking at a Malasakit Center event at Quirino Memorial Medical Center, Go declined to confirm if Duterte had told Marcos about a possible endorsement of his presidential bid.

But he said the result of the meeting was “good” and that “80%” of it was Duterte speaking.

“He shared his experience as President…. Nagbigay siya ng kaunting payo, mga ginawa niya sa ating bayan sana ipagpatuloy sino man magiging susunod na pangulo,” said Go. (He gave some advice, what he has done for the country, his hopes that it will be continued by whoever will be the next president.)

According to Go, the meeting was arranged by leaders of the PDP-Laban faction backed by Duterte. Malacañang has yet to issue a statement about Duterte and Marcos’ meeting.

Senator Aquilino “Koko” Pimentel, son of PDP-Laban founder Nene Pimentel, said that the the move of Cusi’s camp clearly showed that the latter are “total strangers” to the party.

PDP-Laban was founded in the early 1980s to fight the Marcos dictatorship.

“With this latest action from Sec. Cusi and his cohorts, they have manifested that they are total strangers to PDP-Laban. They don’t even acknowledge that PDP-Laban was established to oppose the Marcos dictatorship,” Pimentel said.

“Time for Comelec to dismiss the petition of these usurpers!” he added.

Pimentel further illustrated the disconnect between the Cusi camp’s endorsement of Marcos Jr. and the PDP-Laban principles.

“In Germany for example, a political party formed to oppose Adolf Hitler will definitely not support an Adolf Hitler Jr. That is simply the logic. Consistent with the PD- Laban history and party constitution!” Pimntel said.

Duterte’s party PDP-Laban is divided into two factions – one led by Cusi and another led by presidential candidate Senator Manny Pacquiao – as part of the power struggles within the party ahead of the 2022 presidential elections. Pimentel chairs the Pacquiao faction, calling themselves “the originals.”

The infighting within the party started in 2018, ahead of the senatorial elections, when Cusi’s group wanted to support political candidates that the “original” PDP-Laban did not support. The war between the two factions escalated when Duterte ordered Cusi to hold a meeting in Cebu City.

The Commission on Elections has yet to decide on which camp is the legitimate PDP-Laban. – with a report from Pia Ranada/Rappler.com