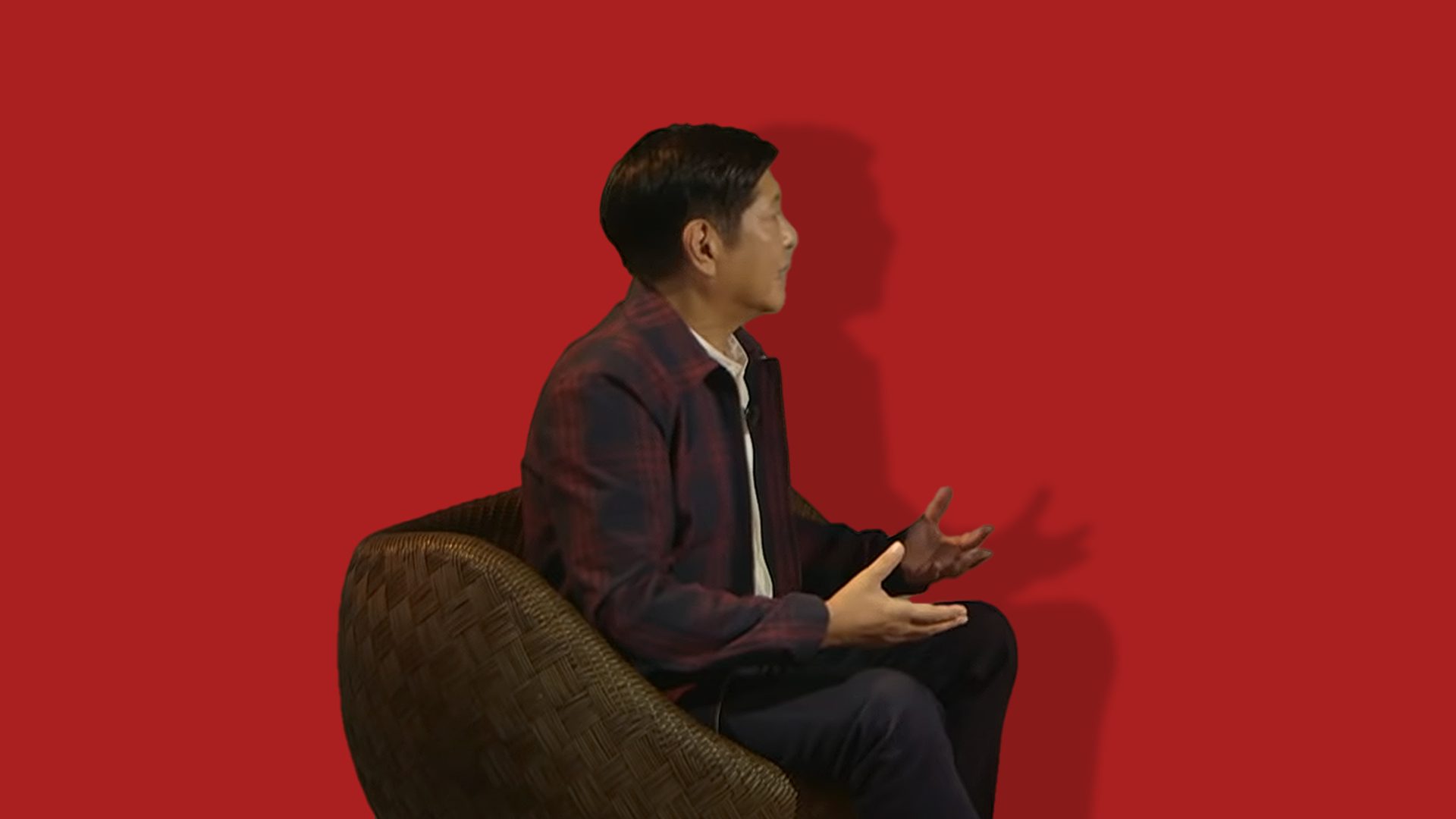 MANILA, Philippines – Presidential aspirant Ferdinand “Bongbong” Marcos Jr attended four media fora this week during which he flip-flopped on transparency, revealed his liberal views on abortion, and raised questions about his economic plans.

What was clear and consistent in his interviews with the ALC Media Group, One PH, DZRH, and entertainment host Boy Abunda was his foreign policy. He said he is prepared to shelve our 2016 historic arbitration win to forge a bilateral agreement with the Chinese, whom he calls his friends.

The first interview he did was with the ALC media group on Monday, January 24, composed of CNN Philippines, DWIZ, Philippines Graphic, Business Mirror, and Pilipino Mirror.

Marcos was asked categorically if he would release to the public his Statements of Assets, Liabilities, and Net Worth (SALNs), and for seven minutes he talked about how SALNs are weaponized and how “lessons learned” from the impeachment trial of the late former chief justice Renato Corona makes Ombudsman Samuel Martires’ restriction a justified policy.

“If it’s just for political purpose, if there’s a problem, if they neglected, and violated in some way what they were supposed to do, we can take it to the authorities, publicizing it will not help,” said Marcos.

Asked once more if he would do what Vice President Leni Robredo does, which is release her SALNs on her own to go around the Ombudsman restriction, Marcos said: “You give me somebody’s SALN, mahahanapan ko ng issue yan kung talagang gusto ko (I can find an issue if I want to).”

Marcos was immediately criticized for that stance, so that by Monday evening, when he faced One PH’s Sa Totoo Lang, he said he was “perfectly willing to show my SALN.” Marcos repeated this stance a day later, on Tuesday, January 25, when he was interviewed by the DZRH panel.

Marcos, however, said he doesn’t have SALNs to show yet because he hasn’t been in government for the last six years.

Marcos was the only one among them who said he favors abortion if the woman is a victim of rape or incest and if her health was at risk, telling Abunda on Tuesday, January 25: “If it can be shown that they were raped and it was not consensual sex that got them pregnant, then they should have the choice to abort or not.”

Lacson and Robredo were hesitant on the issue, while Moreno and Pacquiao were absolutely not in favor.

However the next day, Marcos’ media team sent a press release that sought to appease his conservative base. The press release said: “Marcos said he is firm on his pro-life stance, however, he would allow abortion in extreme cases or in instances where it is justified.”

In the interview with Abunda, Marcos sounded like he was pro-choice.

Marcos was also open to discussing divorce, but admitted it was not a simple issue. He proposed studying granting legal status to a couple who would be happier if they separated.

On Friday, January 28, economic think tank IBON Foundation published a report on the economic platforms of the bets, but left Marcos’ space blank.

Unlike labor leader Leody de Guzman, Lacson, Moreno, Robredo and Pacquiao, Marcos has not published a detailed and readily available roadmap of his economic plans, except for press releases his media team sends out.

Marcos had the chance to talk about his economic plans in his media blitz this week, but his assessment of the country’s debt-to-GDP (gross domestic product) ratio raised some eyebrows. Debt-to-GDP ratio is the level of debt relative to the size of the economy. Ours is currently at 63%, past the internationally-accepted threshold of 60%.

But for Marcos, this ratio is okay, as he told Abunda: “There are other countries that are close to 100%, some surpassed 100%, so we are in a relatively good position.” Robredo, for her part, was wary about the 63% ratio and said it already put us at risk of not being able to pay our debts.

Marcos highlighted his jabs-to-jobs program, where he said a proper information drive and a more efficient vaccine rollout should be able to increase our vaccination rate so people can return to work.

“Agriculture, tourism, we should go back to the concept of public-private partnership, and that way we can bring together different segments of the government working together so that the economy will come back and hopefully it will come back stronger than it was during pre-Covid,” said Marcos. He added that for him, there should be “no more lockdowns.”

In the four interviews, Marcos went back to his father’s programs, beginning with labor export.

On the issue of Overseas Filipino Workers (OFWs), Marcos talked at length on Monday with the ALC media group about his labor export policy, saying he wants a retraining program for returning OFWs “with an eye to the international labor market.” Labor export policy is slammed by some sectors as a lazy economic push, because it takes away the burden on government to create jobs here and generate sustainable wealth.

(Which country needs construction jobs, which is looking for nurses, for doctors. Where can we export?)

Abunda, in his interview, raised the “unquantifiable social cost” of labor migration that “destructs the Filipino family.”

“The ideal is that nobody has to go, that we have enough jobs na hindi na kinakailangang magbiyahe sa abroad (where they don’t have to go abroad), unless…not by necessity anyway. They have a choice to remain here in the Philippines, baka mas may magandang puwesto na mas malaking kita na mapuntahan nila (maybe they could find a better-earning post they can take),” said Marcos.

“The ideal is to bring them all home if they want to come home. But of course, we are a long way from that,” said Marcos.

Marcos also said it would be wise to revive or copy the Bagong Lipunan Improvement of Sites and Services (BLISS) housing project, the Kadiwa stores, and Bataan Nuclear Power Plant project under his father’s administration.

VERA Files had fact-checked Kadiwa’s alleged success, pointing to studies that say “reception to Kadiwa by Manila’s poor was not as enthusiastic as now recalled,” because “people were discouraged by the queues, the distance of the stores and some irritable service personnel.”

In June 2021, the Supreme Court voted unanimously to award the Philippine government over P1 billion in damages over the fraudulent award of the BNPP deal to Westinghouse Electrical Corporation, brokered by the late Herminio Disini, a Marcos crony.

Marcos was supposed to have a fifth interview on Friday, January 28, but his media team canceled because they supposedly could not reach the candidate who’s in Davao. Elections Commissioner Rowena Guanzon had said the night before she voted to disqualify Marcos on the basis of, among others, a fake receipt of payment of tax fines. – Rappler.com