ILOILO CITY, Philippines – In their first visit to the vote-rich Iloilo city and province, neither Bongbong Marcos Jr. nor Sara Duterte made specific mention of the historic revolution that’d be commemorated just the day after: the People Power Revolution, a nationwide movement that ousted Ferdinand Marcos, the presidential preference survey front-runner’s father.

Marcos Jr. and Sara Duterte arrived in Iloilo City early February 24, a day after campaigning in nearby Negros Occidental and Bacolod City. 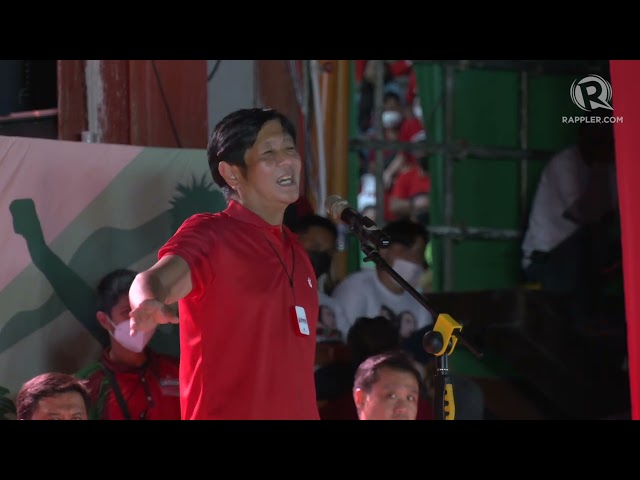 The visit would be the first time for the tandem – both front-runners in their respective preference surveys – to tread into an area considered the bailiwick of their closest rivals. Iloilo City and Iloilo Province, with a combined voting population of over 1.6 million, had, in 2016, rejected Marcos Jr. in the polls. In the vice presidential race, Vice President Leni Robredo got 573,729 in Iloilo province compared to Marcos Jr.’s 94,411. In the city, Robredo edged out Marcos Jr. by over 100,000 votes in 2016.

The Duterte name, too, didn’t fare well in the 2016 polls. Sara Duterte’s father, President Rodrigo Duterte, lost in both the province and the city despite a landslide national win over closest rival Mar Roxas, Robredo’s running mate then. In the 2019 senatorial race, some opposition bets fared much better in Iloilo than they did in the rest of the country.

Sara Duterte had first visited Iloilo City as a 2022 candidate in December 2021 without her running mate.

For their first visit to Iloilo, the tandem – bound by the “Uniteam” alliance – went all out.

Major national allies – from Lakas-CMD president emeritus Gloria Macapagal-Arroyo to Narvacan mayor and political kingpin Chavit Songson – flew into the province to campaign. But their events, normally a flurry of activity that includes non-stop rallies and long motorcades – were slightly pared down in Iloilo City and province, where the incumbent mayor and governor are allies of Robredo.

At least two events were canceled as well – Duterte’s meet-and-greet and courtesy call at the provincial capitol and a rally at Guimbal, a town under the first district, which their ally Janet Garin represents in the House.

Still, in the public events that did push through – an indoor gathering with barangay officials and supporters at the Iloilo Convention Center and a proclamation rally at Barotac Nuevo town – drew huge crowds.

“There’s only one reaction I can give – that we are very happy that this trip that we had is what we can consider a great success because our friends here have put together a very nice program while we are here,” said Marcos Jr. in a rare chance interview with reporters after the Barotac Nuevo rally.

Iloilo City is where the tandem met, in private, with allies from Western Visayas. At a posh hotel close to the Iloilo Convention Center, Marcos Jr. and Duterte met with officials, including Governor Rhodora Cadiao and Vice Mayors Jun Jun Pacificador and Te Dionela all of Antique; Mayor Elvira Alarcon of Batad, Iloilo, Mayor Emerson Lachica of Kalibo, Aklan; Vice Mayor Jeffrey Ganzon of Iloilo, Mayor John Taroza of Zaraga, Iloilo and Mayor Junjun Jaen of Leganes, also of Iloilo; and President Roxas, Capiz Mayor Receliste Lachica Escolin, among others.

In the Barotac Nuevo rally, hosted by local ally former 4th district representative Ferjenel Gonzales Biron, a crowd in red swooned as Robin Padilla – a maybe member of the Uniteam senatorial slate – sang a rusty version of “Wonderful Tonight,” they chuckled when Senate reelectionist Jinggoy Estrada joked about getting rid of the color pink, a reference to Robredo’s campaign colors.

The controversial Toni Gonzaga – who hosted the Uniteam campaign kick-off – this time endorsed former public works chief Mark Villar, who is seeking a Senate seat. The crowd cheered on as Biron introduced Marcos Jr. as “our new president” and chanted “BBM” as Marcos’ son delivered his stump speech on unity.

His mention of a bridge that would link Iloilo, Guimaras, and Negros Occidental earned the most applause – it’s a proposal that most recently, was championed by outgoing Senator Franklin Drilon, the Iloilo senator allied with Robredo.

“I always am surprised over how many people come and over how warm the reception is,” he would tell reporters after the rally. 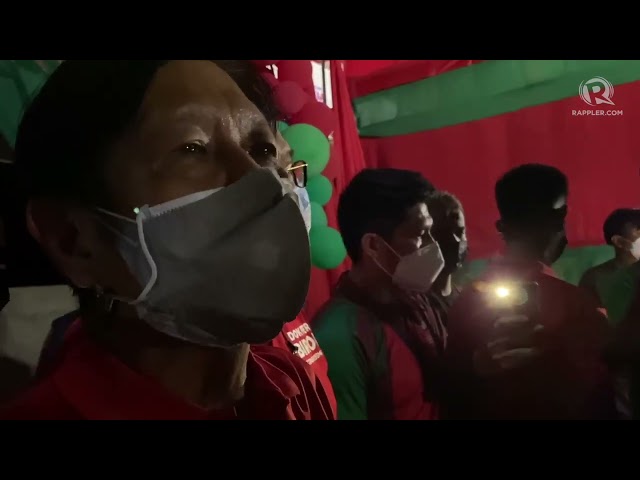 Iloilo’s rejection of the Marcos name on the ballot isn’t just a 2016 thing. The province and city, much like the region it’s in, counts many of its sons, daughters, and young leaders and victims of atrocities during the dark days of Martial Law under the former dictator. It’s a memory a lot of Ilonggos — especially those who fought against the dictatorship — won’t soon forget.

A day after Marcos Jr. and Duterte left the province, the provincial government itself led events to commemorate People Power. – Rappler.com