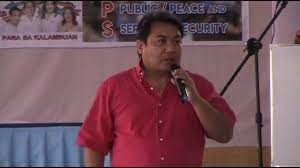 The son of Zamboanga Sibugay’s first governor wants to succeed his sister as representative of the province’s 2nd District.

Businessman George Hofer II filed his certificate of candidacy before the provincial office of the Commission on Elections on Wednesday, October 6.

Hofer’s father and namesake George served as founding father of Zamboanga Sibugay. His sister Dulce Ann – representative of the 2nd District of Zamboanga Sibugay – is running for governor and is attempting to snatch the province’s leadership from the ruling Palma family.

George II, who filed his COC as a member of the Nacionalista Party, challenged the reelection bid of Governor Wilter Palma in 2019, but lost in the race. Palma aims to trade places with his son and namesake Wilter II, the congressman of the 1st District.

He would be facing businesswoman Antonietta Eudela, who filed her COC on Friday, October 1, as the congressional bet of the Lakas-Christian-Muslim Democrats.

Eudela challenged the reelection bid of George II’s sister during the 2019 congressional race and lost. Eudela’s son Anthony sits in the provincial board and is the president of Zamboanga Sibugay’s influential Sangguniang Kabataan Federation. – Rappler.com