#PHVote Guides: When can candidates be substituted? 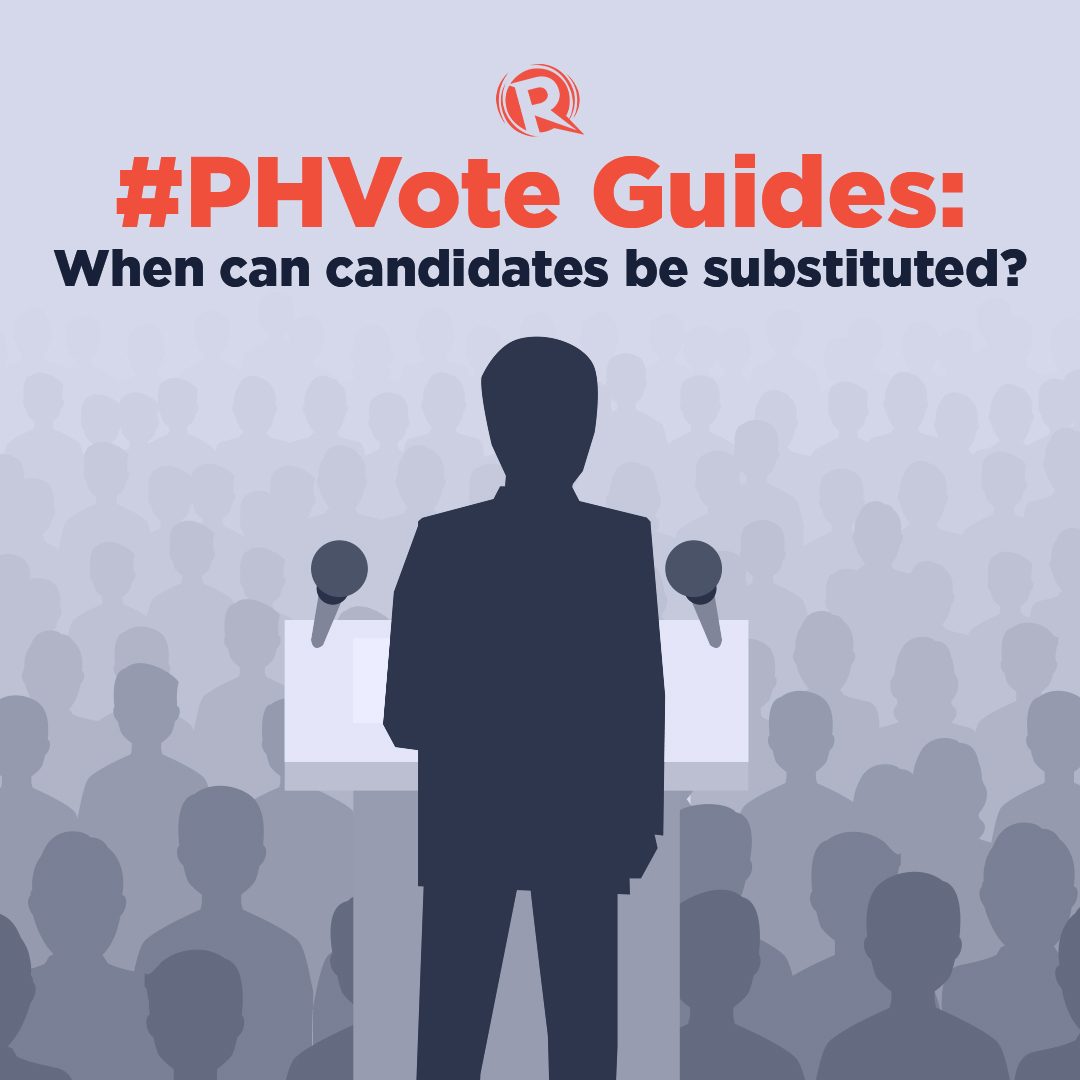 Facebook Twitter Copy URL
Copied
(1st UPDATE) Political aspirants hoping to substitute for candidates who withdraw from their party or coalition’s ticket can file their certificates of candidacy until November 15, 2021

MANILA, Philippines (1st UPDATE) – In the Philippine electoral system, political aspirants have a certain week scheduled by the Commission on Elections (Comelec) to file their certificates of candidacy (COC) for the next regular elections.

For the 2022 elections, the period for COC filing is October 1 to 8, 2021. What happens if aspirants miss the deadline? Can they still run?

Yes – as a substitute for someone else.

How does substitution work? Here’s what you need to know.

Under Comelec rules, political parties and coalitions that field a candidate can choose to substitute that candidate if one of three things happen after COC filing:

The schedule for the substitution period varies per election season.

For the 2022 elections, if a candidate withdraws, dies, or is disqualified by final judgment, a substitute candidate can file their COC by November 15, 2021. This COC will reflect the name of the substitute.

November 15 is also the last day for substituting of party-list nominees who withdraw.

After November 15, substitution is allowed only if:

The substitute can file their COC from November 16, 2021, up to midday of May 9, 2022 (election day), provided the substitute has the same surname as the original candidate.

If the original candidate withdraws from November 16 onwards, they are not allowed to have substitutes.

Midday of election day is also the deadline for substituting party-list nominees by reason of death or incapacity.

Names of substitutes, if any, need to be included when a candidate withdraws his or her certificate of candidacy.

The substitute nominee’s name will be last on the list.

Within five days from filing the list of substitute nominees, the party must “cause the publication” of its new and complete list of nominees in two national newspapers of general circulation.

Then, the party needs to submit proof that publication was completed to the law department within three days of publication.

In 2015, the year before the presidential election, then-Davao City mayor Rodrigo Duterte became a candidate for president even if he expressed his intent to do so past the COC filing deadline in 2015.

Martin Diño, the one who originally filed his COC as the presidential nominee of PDP-Laban, withdrew his presidential bid on October 29, 2015, after saying he felt insulted by the Comelec, who informed him they might declare him a nuisance candidate.

The deadline for parties to substitute their candidate for that election season was December 10, 2015. PDP-Laban then nominated Duterte to be the substitute standard-bearer.

In the 2019 midterm elections, Filipinos criticized the Comelec’s substitution rules.

The substitute should also belong to, and be nominated by, the political party or coalition of the original candidate.

This meant that, if a voter cast their vote in the early morning of election day, their chosen candidate could still substitute himself with his eligible spouse or child, for example. They just had to do it before noon.

After criticism, the Comelec amended its substitution rules, and shortened the deadline for substitution due to withdrawal only up to November 29, 2018, instead of midday of 2019 election day.

This amended rule is adopted again for the 2022 elections. – Rappler.com