#PHVote Guides: What are the grounds for canceling a certificate of candidacy? 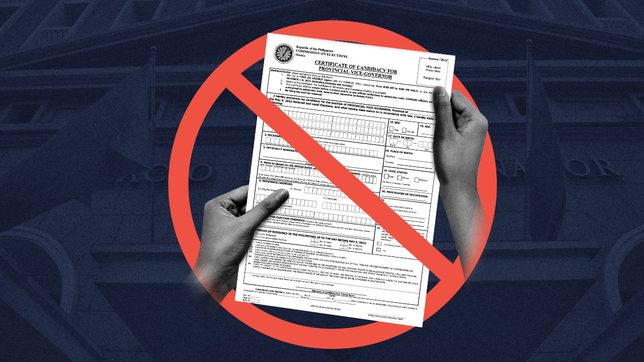 The period for filing of certificates of candidacy (COCs) ended on Friday, October 8. Following this, the Commission on Elections (Comelec) is set to post its list of official candidates.

It’s important to know that petitions can be filed in order to deny due course to or cancel a COC. In what instances can this be done?

What are the grounds for canceling a COC?

Rule 23 of the Comelec Rules of Procedure, as amended by Comelec Resolution No. 9523, contains the provisions on petitions to deny due course to or cancel certificates of candidacy. Section 1 states that a verified petition may be made “on the exclusive ground that any material representation contained therein as required by law is false.”

A person’s COC show their eligibility for the office they are seeking. These material representations include the date of birth, the period of residence in the Philippines, and the declaration of Filipino citizenship, among others.

To read more about qualifications for the different elective offices, you may refer to Rappler’s series on the powers and duties of elected officials.

One of the most controversial instances of COC cancellation was that of Senator Grace Poe in 2015. A Comelec division unanimously voted to cancel Poe’s COC for president in the 2016 elections, saying her COC contained material representations that were false. In particular, the petitioner accused Poe of material misrepresentation in stating that she is a natural-born Filipino citizen and a resident of the Philippines for 10 years prior to May 2016.

The Supreme Court reversed the Comelec en banc’s decision to dismiss Poe’s appeal, and allowed her to run for president.

In 2019, the Comelec canceled the COC of Edu Manzano for congressman because he was not a Filipino citizen when he ran for office. Comelec said he “committed false material representation on his citizenship.”

If a petition to deny due course to or cancel a COC is granted by final judgment, the votes cast for the affected candidate shall be deemed as stray votes.

Who can file such a petition?

When can this petition be filed?

Comelec spokesperson James Jimenez cited Comelec Resolution No. 9523 when asked about the period for filing this petition. It stipulates that it may be filed within five days from the last day for the filing of COCs, but not later than 25 days from the time of filing of the COC subject of the petition.

What are other instances when a COC may be canceled?

There is also the matter of nuisance candidates. According to Rule 24 in the Rules of Procedure, a candidate who filed his COC “to put the election process in mockery or disrepute or to cause confusion among the voters by the similarity of the names of the registered candidates,” or who by other means has clearly demonstrated to have no bona fide intention to run for the intended office, may be declared a nuisance candidate, and their COC may be denied due course or may be canceled.

The Comelec may declare a candidate as a nuisance motu proprio, subject to an opportunity to be heard. A registered candidate for the same position may also file a petition to declare another as a nuisance candidate. – Rappler.com