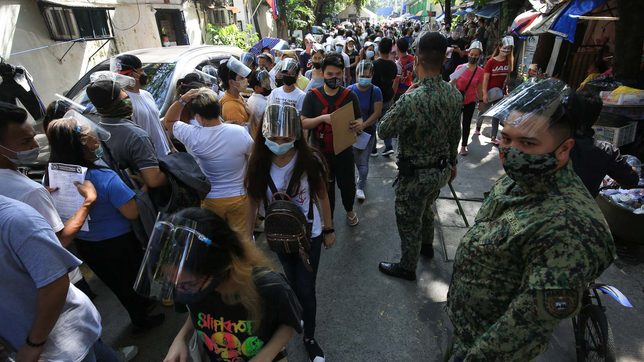 Facebook Twitter Copy URL
Copied
As both chambers have fast-tracked the passage of the proposal, the question now is whether President Rodrigo Duterte would sign it into law once it reaches his desk.

The House of Representatives, in lockstep with the Senate, passed a bill on Monday, September 27, seeking to extend voter registration.

House Bill No. 10261, also titled “An Act Fixing the Last Day of Registration of Voters for the 2022 National and Local Elections,” hurdled third and final reading, with a vote of 193 in favor of it. No one decided against the bill, or abstained from voting.

Unlike the Senate bill, the House’s proposed measure on the extension of the September 30 voter registration deadline did not explicitly mention moving it to October 31.

Instead, the House proposal wanted voter registration to be extended 30 days after the bill is enacted.

“The last day of registration of voters for the 2022 national and local elections shall be 30 days after the effectivity of this Act,” the bill read.

As both chambers have fast-tracked the passage of the proposal, the question now is whether President Rodrigo Duterte would sign it into law once it reaches his desk.

The passage of the bill in the lower chamber came after the House suffrage panel refused to cave in to Commission on Elections (Comelec) Commissioner Aimee Ferolino’s proposal on Friday, September 24, of a one-week extension instead, which would be held after the filing of the certificates of candidacy from October 1 to 8.

The Senate finance panel also did not entertain the same proposal presented by Comelec Chairman Sheriff Abas that same day, and instead deferred action on the poll body’s proposed 2022 budget.

The move meant the upper chamber made good on its threat to use Comelec’s proposed 2022 budget as leverage in the negotiations on the extension of voter registration.

“We’re preparing the recommendations now, and it will be submitted to the en banc on Wednesday (September 29),” said Jimenez.

The Comelec has stuck to its September 30 registration deadline, despite public clamor for an extension and amid long lines that hounded local Comelec offices in many parts of the country.

The poll body had cited operational concerns, specifically administrative preparations that are dependent on the final number of voters, such as the proper allocation of official ballots and other paraphernalia, among others.

Election stakeholders are worried that millions of Filipinos would be disenfranchised if the Comelec would stick to its deadline.

The Comelec has over 61 million registered voters, way above its initial projection of 59 million voters.

But the projected voting population of the Philippine Statistics Authority for the May 9, 2022 vote is 73.3 million. – Rappler.com