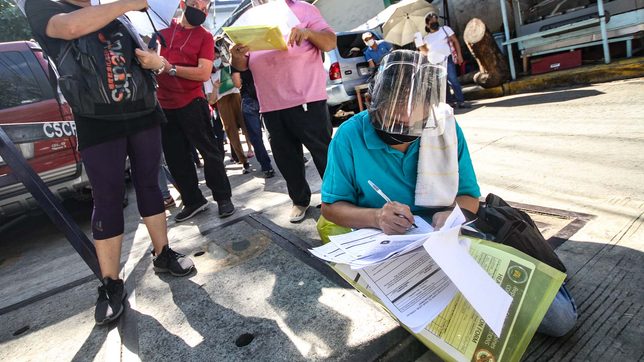 SUFFRAGE. Applicants fill out forms at the Commission on Elections office in Manila on May 17, 2021.

Facebook Twitter Copy URL
Copied
Millions can lose their chance to vote if the registration deadline is not moved, warn lawmakers from the leftist Makabayan bloc

Members of the leftist Makabayan bloc at the House of Representatives filed a resolution on Monday, August 16, urging the Commission on Elections (Comelec) to continue receiving voter applications until at least October 31.

This follows a similar resolution filed by seven senators on Friday, August 13, warning that millions can lose their chance to vote if the registration deadline is not moved.

The current deadline is September 30.

The Comelec said it has met its target number of first-time voters as early as June, but data from the Philippine Statistics Authority (PSA) suggest that the total number of voters for 2022 might be higher than Comelec’s projection.

“The Members of the House of Representatives urge the Commission on Elections to extend the deadline for voter registration until at least October 31, 2021, to deter massive voter disenfranchisement amid the COVID-19 pandemic,” the resolution read.

Representatives Arlene Brosas, France Castro, Eufemia Cullamat, Sarah Elago, Ferdinand Gaite, and Carlos Zarate were the signatories of the document sent to the media on Monday.

In their appeal, they said the months-long hard lockdowns caused by COVID-19 in 2020 and 2021 mean that extending voter registration “is all the more a prudent thing to do” for the poll body.

In the Philippines, voter registration is automatically suspended in areas placed under enhanced community quarantine (MECQ) and modified ECQ – the two strictest types of lockdown under the Duterte administration.

The lawmakers also pointed out that qualified voter applicants had a hard time registering in the run-up to the deadline.

“Among the reported concerns are limited registration slots offered by local Comelec offices or local governments, ineffective registration sites due to various factors such as, but not limited to, sudden or scheduled registration early cutoff because of crashing or down online voter registration system and long lines due to staff shortage,” the resolution added.

Both House representatives and senators said that 13.3 million unregistered voters could be deprived of their right to vote.

As of June, the Comelec said it has met its target of four million first-time voters, out of the 60 million already eligible to cast their ballots in 2022. The PSA’s projected voting population for the 2022 polls, however, is 73.3 million – far from Comelec’s projected 61 million registered voters.

The lawmakers from both chambers also insisted that the Comelec, in the past, was able to set voter registration deadlines, and argued that the poll body still had enough time to prepare their final list of voters. Preparing the voter rolls and precincts and printing of ballots were among the reasons cited by the Comelec as to why it was difficult to move the deadline.

During Rappler’s #CourageON show on Saturday, August 14, Comelec Director Frances Arabe said the poll body was still gathering inputs from other offices about the calls for an extension of the deadline.

“The Comelec listens to the public’s clamor for an extension. Just to inform everyone, the commission en banc is gathering inputs and comments from various departments, working committees and field offices on the matter,” Arabe said.

“Our commission en banc will take into consideration these appeals for extension vis-a-vis our timeline for the preparations for the elections,” she added.

The calls for extension underscores how the pandemic complicated the poll body’s preparations for the May 9, 2022 vote.

But the Comelec has maintained that the 2022 polls would push through, and that it is capable of conducting safe elections despite the virus threat. – Rappler.com