Hugpong vows to ‘do more’ for Marcos in Davao, as some incumbents pick Robredo WILL DO MORE. The Hugpong ng Pagbabago slate which lost to Pantaleon Alvarez in a sweep in 2019 hosts Uniteam in Carmen, Davao del Norte on March 30, 2022. Photo by Ulysis Pontanares/Rappler 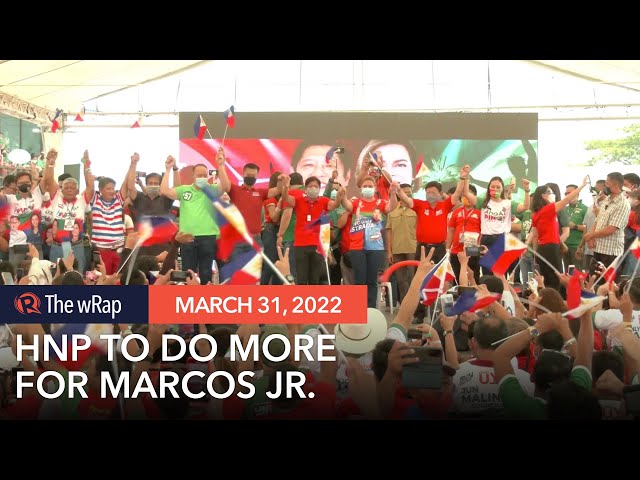 DAVAO CITY, Philippines – Ferdinand “Bongbong” Marcos Jr. toured the Davao region on Wednesday, March 30, stopping by the crucial provinces of Davao del Norte and Davao del Sur where the incumbent officials have either categorically supported Vice President Leni Robredo or appeared with her during sorties.

It will be the Hugpong ng Pagbabago (HnP), local party of Marcos Jr.’s running mate Sara Duterte, which will try to shore up votes for the son of the dictator.

“We will try our best to deliver for Bongbong Marcos in Davao region and based on our survey, he is doing well and we can do more for him,” Davao City Mayor and vice presidential bet Sara Duterte said on the sidelines of the Uniteam rally in Carmen, Davao del Norte, Wednesday morning.

What’s going against HnP in Davao del Norte is that they were defeated in the 2019 local polls by the slate of First District Representative Pantaleon Alvarez, who recently just switched support from Panfilo “Ping” Lacson to Robredo. Alvarez’s ally, Davao del Norte Governor Edwin Jubahib, a neophyte politician who in 2019 defeated Rodney del Rosario of the Del Rosario clan, is also backing Robredo.

“I don’t think anything will change. BBM [Bongbong Marcos] will still win as president, what I cannot understand [with Alvarez] is why he would drop his initial presidential candidate Ping Lacson, I cannot understand why he did that,” HnP secretary-general Anthony Del Rosario said in a mix of English and Filipino in Carmen on Wednesday. Anthony, Rodney’s brother, was himself a former Davao del Norte governor.

Alvarez beat Anthony del Rosario for the first district in 2019, and managed to make the neophyte Jubahib win to end the Del Rosarios’ hold of the Capitol. This happened despite Alvarez’s nasty and public fallout with the presidential daughter in the Davao region, considered a Duterte country. President Rodrigo Duterte had served as Davao City mayor for decades.

“[Alvarez’s endorsement] has a significant impact because right now, they are the incumbents and President Duterte is outgoing,” Villarin said in a mix of English and Filipino in a Zoom interview with Rappler on Tuesday, March 29.

What changed for Alvarez in the 2022 elections is 2nd District Representative Alan Dujali.

Dujali ran under PDP-Laban in 2019 and defeated HnP bet, Alvarez’s nemesis, Antonio “Tonyboy” Floirendo Jr. But this year, Dujali is running with HnP and is supporting Uniteam. Dujali was on stage with Uniteam in Carmen, but Floirendo was not.

Marcos Jr.’s similarly short answer was that for him, the people resonate with their message of unity, telling this reporter that “the crowd understands the message very well, that is the most important part.”

But in the Davao region, pockets of the so-called Ro-Sa or Robredo-Sara support have emerged. HnP officials downplay this. “Whatever happens, we’re BBM-Sara, we thank other candidates who carry Sara but as far as HnP is concerned, we are BBM-Sara,” Anthony Del Rosario said.

The Davao region has a combined 3.2 million voters, which former senator Alan Peter Cayetano, running for vice president then, won in 2016. Marcos Jr. came in second in the region in 2016, while Robredo came in third.

Davao del Norte is vote-rich with 690,248 voters. Davao del Sur, if you include Davao City which is what’s reflected in the Comelec database, has 1.44 million voters.

The numbers above show why the grand rally in Digos City, Davao del Sur, was important. Incumbent Governor Marc Cagas did not join the Uniteam. It’s the Cagases’ challengers, the Ramas and Bautistas, who hosted Uniteam in the Digos rally.

Marc Cagas hosted Robredo in the Capitol last week, and told his constituents to “give a chance and listen carefully” to the vice president.

With this political landscape, the question on everybody’s minds is: who between Marcos and Robredo will get the votes that Cayetano got in 2016? In the entire Davao region in 2016, Cayetano got 973, 192 votes; Marcos Jr. got 420,903 votes, while Robredo got only 158,362. Cayetano was the President’s running mate then.

For Uniteam supporters in Digos City, the answer does not lie with President Duterte’s endorsement – if ever he will make one. Though they support the President, they said: “We don’t need the endorsement, we’re solid BBM.”

Akbayan’s Villarin agreed. “If [President Duterte] endorses [Marcos Jr.], it’s already too late because the lines have been drawn and I don’t know what will be the value-added of his endorsement.”

Why the shift to Robredo?

In the latest Pulse Asia presidential survey, conducted in February, Marcos Jr. was leading in Mindanao at 68%, with the Mindanaoan candidate Manny Pacquiao only getting 15%.

That is why Sara Duterte is confident, saying “based on surveys that we have, both private and public, he is about 70-80% already here sa Mindanao.”

Why are ruling politicians still going for Robredo? Villarin offered a possible reason: “They know the ground. Like in Davao, they know that the ground is fast catching up. The ground movement is essentially the youth, and I have talked to mayors, governors and even congressmen who tell me, ‘our family, even our wives and children are for Leni.”

Former Davao City Third District Representative Ruy Elias Lopez will be trying to pull off the impossible by challenging presidential son Sebastian “Baste” Duterte for mayor while campaigning for Robredo in Duterte’s city.

Lopez is the son of former Davao City Mayor Elias Lopez, who said he had a falling out with President Duterte when the father fielded Sara for mayor in 2007.

Lopez admitted Robredo’s dim chances to win Davao City, but said he will do what he can.

“Even in my own district, everyone is BBM-Sara. There are BBM-Sara groups which support me for mayor,” Lopez told Rappler during an interview at his home-cum-campaign headquarters in Matina Tuesday night.

“Of course not. Bakit ako matatakot? Bakit ako matakot eh kinalaban ko nga yung mga Duterte? Magkampanya lang ako ng Leni, matakot pa ako?,” said the lawyer Lopez. (Why will I be scared? Why will I fear when I have already gone against the Dutertes? Just by campaigning for Leni, that’s what will scare me?)

Lopez said he tells the voters: “Better choose properly who your president will be because his mistake will affect all of us. Look at us now, we’re drowning in debt kasi hindi nga marunong yung presidente natin, si Digong, sabi kong ganun. Hindi marunong eh (because our President is incompetent, Digon is incompetent).”

Lopez said that local political machineries will still drive the elections in the Davao region, no matter the energy shown by Robredo’s volunteers.

But the difference in these elections, said Villarin, is that local politicians who support Marcos Jr. have been allowing the Robredo supporters to move freely.

“Congressman Ruy Lopez, the Lopez name is known in Davao City, especially in the third district, and there are many Martial Law victims in the Davao Region who won’t go for Marcos. So, definitely, VP Leni will get a sizeable vote,” said Villarin.

Davao region, particularly Davao City, was a bastion of the opposition to the late dictator’s Martial Law regime.

But if you ask Lopez, the anti-Martial Law sentiments may be dying in his home. Why?

“Wala, kasi yung mga anti-Martial Law like Nanay Soling and Dutertes, nasa’n sila ngayon, hindi ba? (No more because the anti-Martial Law personalities like Mother Soling [Soledad], the Dutertes, where are they now?) What kind of people have they become?” said Lopez. – Rappler.com