ILOILO CITY, Philippines – In the event that vice presidential bet Lito Atienza backs out of the race, who else would be a good running mate for Senator Manny Pacquiao?

According to the boxing legend, Atienza wishes it to be Senate President Vicente Sotto III, the running mate of Senator Panfilo Lacson.

(My running mate said, if he were to choose somebody who would run with me in case he could no longer push through with the campaign, he wants Sotto to be my VP.) 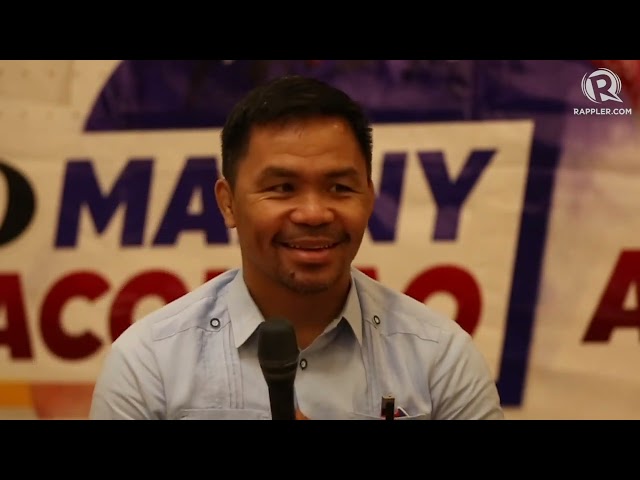 More than halfway through the campaign season, Atienza has yet to join Pacquiao in sorties, following a knee procedure.

When he responded to speculations about teaming up with Vice President Leni Robredo after the endorsement of Reporma, Sotto said that reporters should instead interview Pacquiao.

Sotto later confirmed that he and Pacquiao are talking.

According to the Promdi presidential bet, he and Sotto were supposed to meet on Monday, March 28, but he had to postpone this because of a meeting with SpaceX executives for his planned satellite broadband program in case he wins the elections.

“Basta mag-uusap lang kami. Depende na kung ano yung pag-uusapan namin – about sa buhay, about sa politics,” he said when asked if Sotto would be a common candidate between him and Lacson.

(Just wait for us to talk. It really depends on what we talk about – could be about life, about politics.)

Pressed further about Atienza’s condition and its implication for the campaign, Pacquiao said that the public will just have to wait for further details once he and Sotto meet.

A Pacquiao-Sotto seems to be a likely tandem, given their relationship in the Senate. In June 2021, Sotto entertained the idea of Pacquiao becoming the Nationalist People’s Coalition’s presidential bet, saying the boxing icon was welcome to join the party amid infighting within PDP-Laban.

Pacquiao also said that he and Sotto are friends and that he is a member of the so-called “macho bloc” in the Senate, together with Sotto, Lacson, senatorial candidate Gringo Honasan.