In Comelec-Rappler MOA signing, Ressa underscores what’s at stake in 2022 Nobel Peace laureate and Rappler CEO Maria Ressa and acting Comelec chairperson Socorro Inting lead the ceremonial signing of the memorandum of agreement between Rappler and the Comelec at Intramuros, Manila on February 24, 2022, for a series of projects in the run-up to the 2022 elections. Also present are Comelec spokesperson James Jimenez, Commissioner Aimee Ferolino, Commissioner Rey Bulay, and Rappler executive editor Glenda Gloria.

MANILA, Philippines – The outcome of the 2022 Philippine elections will affect the future of other democracies around the world, Nobel Peace Prize laureate Maria Ressa stressed during the signing of memorandum of agreement (MOA) between the Commission on Elections and news organization Rappler.

The partnership, formalized in a ceremony on Thursday, February 24, means that the Comelec and Rappler will collaborate for a fact-checking initiative, as well as production of numerous poll-related content, in the run-up to the May 9, 2022 vote.

In her speech, Ressa cited disinformation campaigns waged by China and Russia to further her point that the elections are geopolitical in nature.

“These lies, called information operations, are tearing down trust, including trust in institutions. Legitimacy, public trust, isn’t guaranteed which makes the work of this independent body of the Comelec even more important and even more difficult,” she said.

“Whatever happens here will help determine the fate of other democracies around the world,” Ressa added. 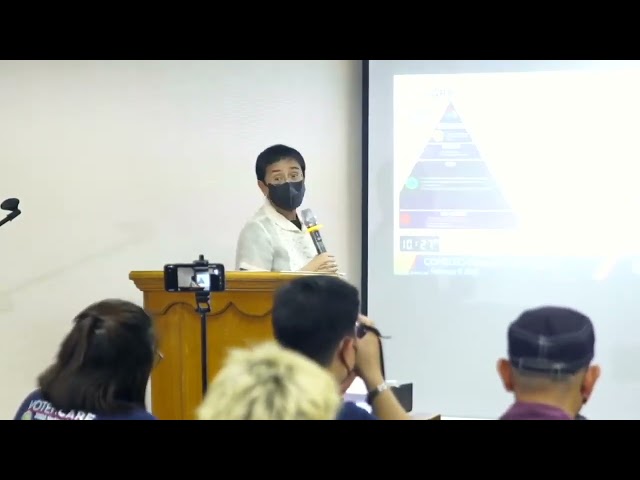 Rappler will mobilize its network of fact-checkers, through the #FactsFirstPH initiative, which is a collaboration among 14 news groups and over 100 civil society organizations.

The top digital-only news organization will alert the Comelec on false and misleading election-related claims in social media. The poll body may also refer to Rappler’s election-related posts for fact-checking purposes.

“We are thrilled to be working with the Comelec to ensure the integrity of elections, in three broad ways: voter engagement, access to critical information at the right time, and fact-checking,” Ressa added.

In her speech, Inting thanked Rappler for “making our load lighter” for the 2022 polls.

“Our signatures represent more than our partnership in the preparatory activities for the forthcoming polls – it likewise symbolizes our institution’s firm commitment to voter education,” she said.

Ressa, in her speech, acknowledged that some “partisan players” online attacked the Comelec and Rappler after a press release on the partnership had been disseminated.

But Comelec Commissioner Aimee Ferolino and spokesman James Jimenez expressed confidence about its agreement with Rappler.

“We are firm in our decision to partner with Rappler because how else can we fight misinformation if we keep on believing other people who say that Rappler is spreading misinformation?” Ferolino said.

“This is actually a culmination of a long vetting process that Rappler willingly and cheerfully [signed up for] to make sure everyone is protected,” Jimenez added.

Rappler, through its civic engagement arm MovePH, will also help the poll body build awareness of the critical elements of the upcoming elections. An online show, podcast, workshop, and seminars are being developed.

The Comelec will also allow Rappler to embed its online precinct finder once it has become available.

Rappler, launched as a website in 2012, has been at the forefront of fighting disinformation online through its uncompromising journalism.

Since the 2013 polls, the Comelec has forged partnerships with Rappler to ensure clean, credible, honest, and truthful elections. – Rappler.com