PRAYING FOR LENI. Priests at St. Augustine parish in Pinamalayan, Oriental Mindoro, pray over presidential candidate and Vice President Leni Robredo during her visit on March 3, 2022.

CAVITE, Philippines – Presidential candidate and Vice President Leni Robredo nixed criticisms from two of her rivals for the presidency, both alleging that she was using the Catholic Church to boost her campaign.

(That’s too much of an insult to the Church. I think the Church wouldn’t allow itself to be used.) 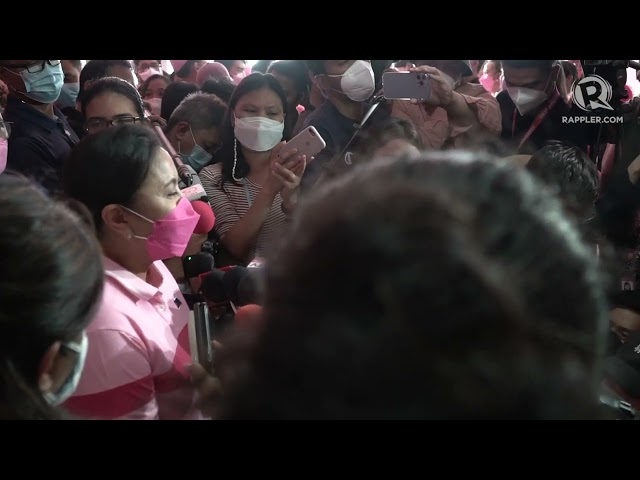 The lone female presidential candidate was asked to comment on claims made by the camps of Manila Mayor Isko Moreno, as well as poll front runner and the late dictator’s son Ferdinand Marcos Jr. that she was taking advantage of the Church for her political agenda.

Moreno himself said he is “offended” that religious buildings are supposedly being used for campaign rallies.

Marcos’s spokesperson Vic Rodriguez also said they were saddened that Church leaders are “meddling” in politics. This is despite the Marcos camp openly broadcasting the endorsement of Brother Mike Velarde of the charismatic group El Shaddai a few weeks ago.

The Marcos-Duterte tandem has also been endorsed by self-styled pastor Apollo Quiboloy, who has been indicted in the United States for sex trafficking charges. Quiboloy founded the Davao-based Kingdom of Jesus Christ, The Name Above Every Name. He is the spiritual adviser of President Rodrigo Duterte, Sara’s father. Robredo, a devout Catholic and a Marian devotee, refused to accept that a respected institution like the Church would even allow itself to be used by mere politicians.

Rather, she said religious leaders have deliberately been choosing to be more active in this year’s electoral affairs given what’s at stake in the 2022 presidential race.

(In my assessment, the reason why the Church is now more active is because they know what’s at stake. This isn’t just about siding with a politician, but it’s the country’s morality that’s at stake here. I believe they’re taking a stand now because of this.)

Ever since Robredo declared her candidacy for president, closed-door visits to cathedrals and churches have become a staple in her daily activities.

The bishops themselves are usually the ones who invite Robredo to visit their diocese, not the other way around. Her campaign team then inserts the invitation into her sortie schedule.

These meetings are closed to reporters. Robredo’s staff just sends photos and videos to reporters after the meeting has taken place.

In these meetings with the clergy and lay people, Robredo seeks the Church’s help in fighting the disinformation plaguing the elections.

Robredo, the top target of disinformation networks online, believes lies and propaganda are no match against the “machinery” of the Catholic Church. More and more Filipino Catholic priests, deacons, brothers, and religious sisters have been coming out to voice support for Robredo in the May elections. Catholic Archbishop Jose Cabantan of Cagayan de Oro openly endorsed Robredo, even allowing journalists to enter the Archbishop’s Palace when he made the endorsement.

The Catholic Bishops’ Conference of the Philippines, a collegial body made up of 127 active and retired bishops, rejected “radical distortions” about the Marcos dictatorship, but did not categorically endorse nor campaign against specific a presidential candidate yet.

They are breaking a long-held tradition that discouraged Catholic leaders from supporting specific candidates.

Lingayen-Dagupan Archbishop Socrates Villegas, however, puts it best: “The Church should always be nonpartisan, but the Church cannot be neutral when we’re already talking about good or evil… The Church is biased in favor of righteousness, goodness, holiness.” – Rappler.com