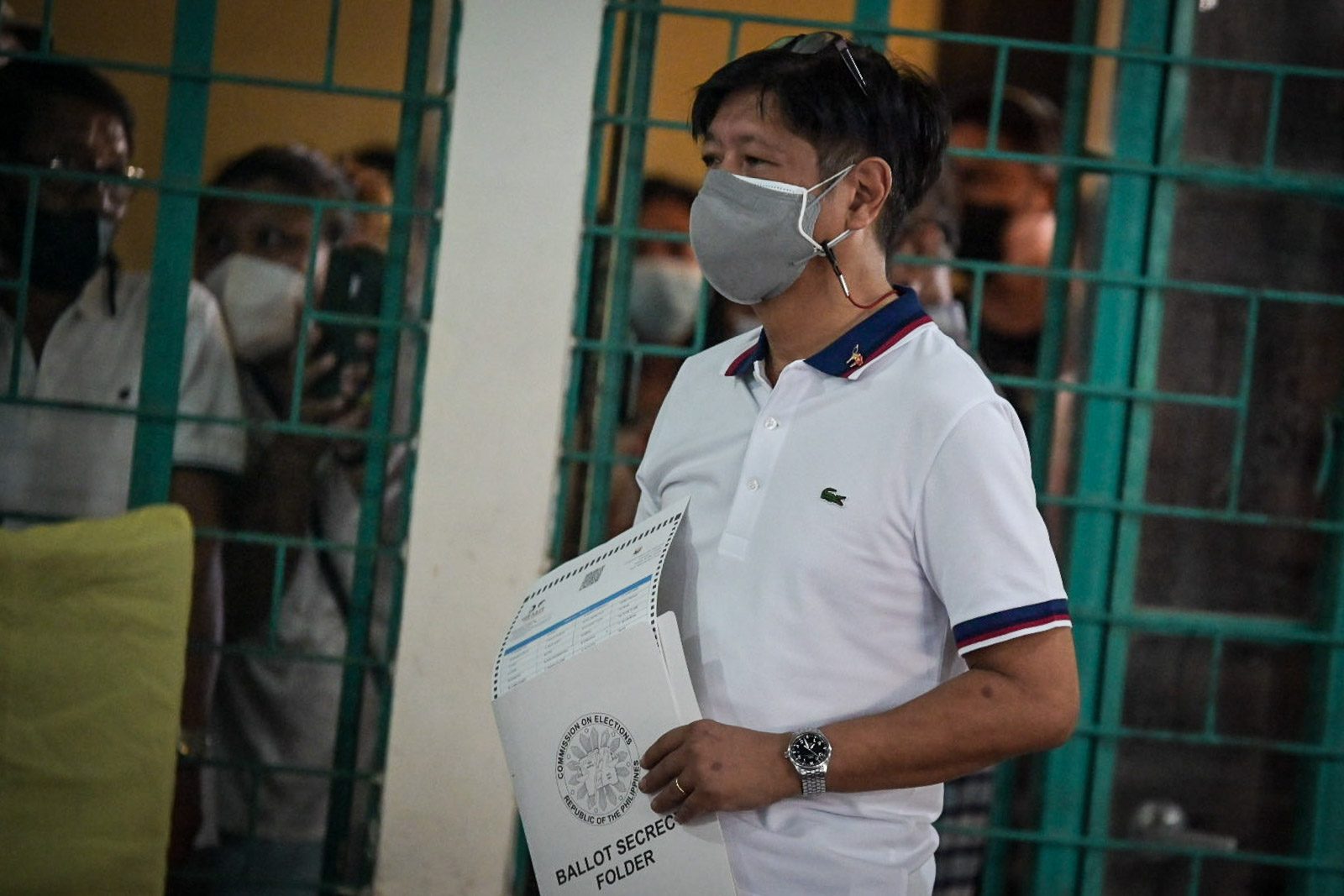 Facebook Twitter Copy URL
Copied
(2nd UPDATE) Can a quo warranto petition be filed against Bongbong Marcos? 'I'm not sure, but I think that may be possible,' says his lawyer Estelito Mendoza

MANILA, Philippines – Veteran litigator Estelito Mendoza said on Friday, May 20, that the right petition to stop the canvassing of votes and proclamation of presumptive president Ferdinand “Bongbong” Marcos Jr. would be an electoral protest.

“That will have to be done through an election protest. Not at this time,” Marcos’ lawyer Mendoza told CNN Philippines’ The Source Friday morning.

The Supreme Court had asked Congress, the Commission on Elections (Comelec), and Marcos to answer the petition of the group of former SC spokesperson Ted Te for a temporary restraining order (TRO) to stop the canvassing of votes and the proclamation of Marcos. The deadline to file the answer is in 15 days, but the canvass and proclamation are set to happen on May 26, according to Senate President Tito Sotto.

The main request of Te’s petition is to cancel the certificate of candidacy (COC) of Marcos, declare his entire candidacy void, and proclaim second placer Vice President Leni Robredo as the winner. The TRO is an immediate request.

Mendoza said a TRO cannot be asked for through Te’s petition, which was in the form of a petition for certiorari, a type of pleading that challenges the decision of a lower court or a lower body like the Comelec. The correct type would be an electoral contest, Mendoza said.

“With all due respect, this is wrong,” election lawyer Emil Marañon said in response to Mendoza’s statement.

“Since they exist in different temporal zones, the legal opinion of Marcos’ lawyer Estelito Mendoza does not make sense,” said Marañon.

Under Rule 15 of the Presidential Electoral Tribunal (PET) rules, the candidate with the second or third highest number of votes can file an electoral protest. The Comelec petitions against Marcos were filed not by any candidate but groups who invoked their being registered voters as their legal standing to file.

“It is basic in election law that an election protest can only be filed by the losing candidate after the proclamation of the winner, which of course would presuppose completion of the canvassing,” said Marañon.

Te said he won’t comment because Mendoza has not said it in a pleading in court. “Let him say it in court and we will respond accordingly,” said Te. Mendoza has only filed a manifestation that argues that the text of the Constitution makes the canvassing of votes and proclamation mandatory, and cannot be stopped by the High Court.

Barry Gutierrez, Robredo’s spokesperson, said that “as of now, there are no plans” to file an electoral protest.

While she has not yet formally conceded defeat to Marcos, Robredo had, on several occasions, urged her supporters to respect the decision of the majority of voters. Partial, unofficial results showed Marcos with 31.1 million votes with Robredo a distant second with 14.8 million votes.

Marcos’ electoral protest against Robredo’s vice presidential win in 2016 was junked 15-0 after five years in litigation.

Any registered voter may file a quo warranto petition to challenge the eligibility of a public officer.

Rule 16 of the PET rules says “a verified petition for quo warranto contesting the election of the President or Vice- President on the ground of ineligibility or disloyalty to the Republic of the Philippines may be filed by any registered voter who has voted in the election concerned within ten days after the proclamation of the winner.”

The text of the provision says if a quo warranto petition will be filed, it will still be after the proclamation.

Marañon said a quo warranto petition can be filed after the proclamation, because “like the protest, it requires a proclamation.”

Can a quo warranto petition be filed against Marcos? “I’m not sure, but I think that may be possible,” said Mendoza.

Ousted chief justice Maria Lourdes Sereno had faced a quo warranto petition. The Supreme Court kicked her out in a contentious decision that said her missing Statements of Assets, Liabilities and Net Worth (SALN) dented her integrity. Integrity, probity, proven competence, and independence are the constitutional requirements to be a justice.

The petitions against Marcos’ candidacy are premised on his 1997 conviction for four counts of failure to file tax returns, which petitioners said disqualified him from running.

It was mentioned in one petition for disqualification before, filed by the group of constitutionalist Christian Monsod, that the conviction perpetually disqualified Marcos as a voter. They cited Article 43 of the Revised Penal Code which says an offense with penalty of prision correcional has an accessory penalty “of perpetual special disqualification from the right of suffrage, if the duration of said imprisonment shall exceed 18 months.”

Section 2, Article VII of the Constitution says “no person may be elected President unless he is a natural-born citizen of the Philippines [and] a registered voter.” – Rappler.com