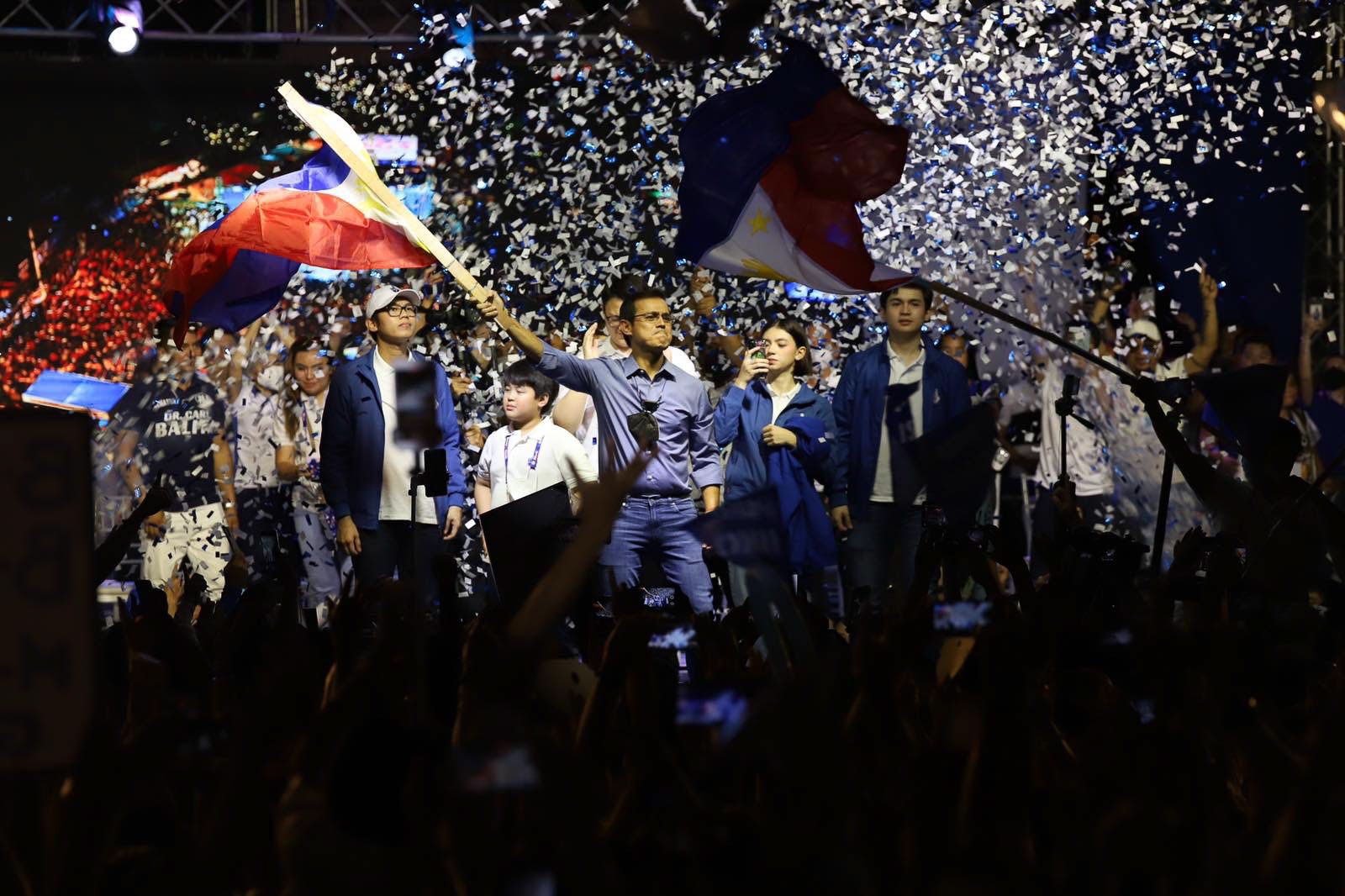 Facebook Twitter Copy URL
Copied
In his last campaign speech, the Manila mayor comes out fighting – throwing jabs at his political rivals and saying he is best suited to lead the country through crises

MANILA, Philippines – In the same streets where Francisco Moreno Domagoso hustled to survive as a child, he ended the biggest gamble of his life so far: his 2022 presidential bid.

From Moriones Street in the capital city’s famous Tondo district, Moreno, Manila’s mayor, held his miting de avance on Saturday, May 7. His audience was a large crowd that was concentrated on Moriones Street but bled into nearby streets. Organizers and police are yet to give a crowd size estimate.

In his roughly one-hour speech, Moreno came out fighting – throwing volley after volley of criticisms against his most formidable rivals for the presidency, and hammering on his message that he is best suited to address the country’s challenges.

If the campaign season was like the card games Moreno played as a Tondo street kid, his miting de avance speech was an aggressive move. Far from his September proclamation speech which focused more on his qualities as a leader and Manila achievements, his last campaign speech was full of jabs at Ferdinand Marcos Jr. and Leni Robredo, the top presidential contenders.

(Where were they during the pandemic? One was just in Forbes Park, vlog, vlog, vlog. So lucky in life, blessed child. Good for him.)

But he had even more snide remarks against Robredo, who, while behind Marcos in surveys, has supporters who have actively called on Moreno to withdraw so as to bolster the Vice President’s chance of winning.

(To them they’re always right. They are the holy ones. When we are the ones who speak our minds, we are rude. Wow! That’s fitting for Ayala Avenue!)

In a style similar to Rodrigo Duterte in 2016, Moreno used self-deprecation and irreverence in many of his swipes. When he again jeered Robredo for her term “laylayan” (dangling in the outskirts) to refer to the poor, he joked: “Makaimbento kayo ng salita palpak pa. Laylayan? Ako, may nakalaylay, naka brip nga lang.“

(You invent a word and it’s a failure. Dangling? If it’s me, something else is dangling, but I have a brief on.)

He was making light of how supporters of other presidential candidates were spreading old sexy photos of him from his showbiz career.

But in his “anti-elite” harangues, he bunched up Marcos and Robredo as part of the same exclusive clique of politicians who seek to box out alternatives like him from Malacañang. It’s consistent with his usual populist messaging style pitting him and his supporters against political elites.

In Filipino, he said, “It’s sad when people from up high who had good education see us as inferior, like we aren’t part of society. As if only they have the right [to be in power]. Will we allow that?”

But in between the diatribes, Moreno spoke in easy-to-understand terms about the brand of governance he is offering Filipinos.

(You in Mindanao, the Visayas, Northern Luzon, Southern Luzon, Central Luzon… I will not embarrass you or abandon you. I will always make you feel a government that is working 24-7!)

Moreno promised a government that would attend to the basic needs of Filipinos – affordable and reliable electricity, water, internet, modern school buildings and hospitals, jobs, and a way out of the COVID-19 pandemic.

(I get things done. I will do everything, push aside mountains, just to flatten out the roads for the journey of ordinary Filipinos!)

The miting de avance was also Moreno’s way of showing gratitude to the Tondo that raised him and raised him up to unexpected heights.

In Tondo, Fransciso Moreno Domagoso tore open garbage bags from fastfood chains in search of dinner. In Tondo too, the same boy would be hailed, under a gale of confetti and the beam of spotlights, as the Manila Mayor who sought the presidency.

He thanked all the people who were part of his extraordinary life journey – his passengers as a pedicab driver, his Tondo High School teachers and classmates, pier boys, celebrities from his showbiz days, Manila City Hall officials and employees, campaign reporters and cameramen, his campaign manager Lito Banayo, and all his campaign team staff.

Moreno’s presidential candidacy had been propelled by two messages – the promise of “bilis kilos” (fast action) by a young leader battle-tested by the COVID-19 pandemic, and the “iba naman” (someone else) pitch for an alternative and centrist candidate unburdened by the political baggage of the Marcoses and Liberal Party.

But along the way, controversy would snare the narratives. Some of the criticisms Moreno has faced include the P50 million in excess campaign funds he decided to keep because the law allowed him to, the sale of the Divisoria public market to boost his city’s pandemic resources, his attacks against Vice President Leni Robredo that may have contradicted his centrist “hindi ako toxic” (I’m not toxic) branding.

These issues, along with the last-minute decisions of Robredo to run and the unexpected Marcos and Sara Duterte tandem, kept Moreno at third place in surveys for most of the election period, even sliding to fourth place in the April Pulse Asia poll.

Still, most of Moreno’s rallies and town hall meetings were well-attended. His crowds were often enthusiastic and exuberant. One of the high points of his campaign was the organic use of the hand sign “two joints” by his supporters, associated with the selling and consumption of marijuana in the streets. It was a nod to his past as a Tondo street kid hustling to get by.

Eventually, Moreno used the hand sign to bolster his branding of himself as a “chill” candidate not caught up in the toxic conflict of what he calls the “pulahan” (reds, referring to the Marcos camp) and “yellow-pink” (supporters of Robredo).

Another highlight of the young Manila mayor’s presidential run was his raising of the Marcos P203-billion estate tax debt as a major election issue. Even his rivals for the presidency sang his tune during the second Commission on Elections debate, elevating the controversy’s profile in both the news cycle and social media feeds.

Youth and vigor was a crucial element of Moreno’s presidential pitch. When the Ukraine-Russia war broke out, he was quick to draw parallelisms between him and Ukraine’s young war-time president, Volodomyr Zelensky. He pointed to other young presidents who have made their mark – from the Philippines’ own Ramon Magsaysay to the United States’ John F. Kennedy.

He and his supporters have trumpeted his achievements as Manila mayor – from his ambitious infrastructure program, to his quick COVID-19 response.

Moreno, who chose a doctor as a running mate to prove he would prioritize pandemic recovery, presented a platform that would focus on improving basic services for Filipinos. (Read about his platform here.)

Its slogan was “Life and Livelihood” or “Buhay at Kabuhayan” and involved making goods more affordable (by halving electricity and oil taxes), building more hospitals and modern school buildings, improving the state of Philippine education, continuing and expanding the Duterte-time infrastructure program, and more.

By the tail end of his presidential campaign, Moreno rejected survey results showing he had single-digit voter-preference ratings.

“I believe there is a great, vast silent majority,” he has said in interviews, pointing to the tendency of some Marcos or Robredo supporters to lash out against anyone who doesn’t agree with their choice for president.

Will Moreno prove right in the end? He, and the rest of the country, will know soon. – Rappler.com