It was a rare moment during the Saturday, March 19, debate when so many candidates agreed with one another on a specific point or call of action. 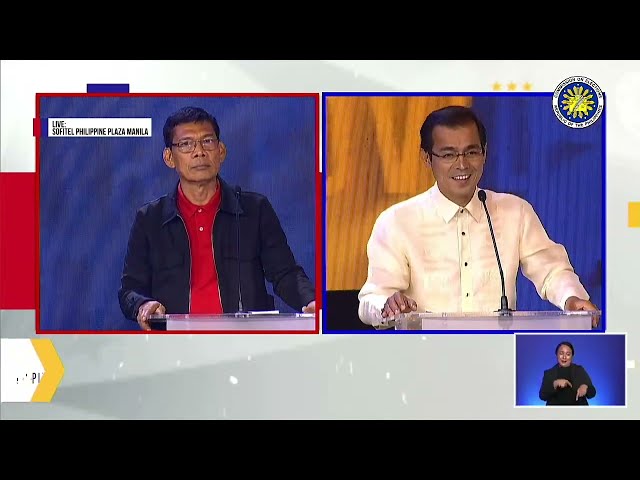 Moreno brought up the Marcos tax debt as part of his proposal of where to source funds for aid urgently needed by sectors affected by recent economic pressures. This was during the latter part of the debate, a portion allocated for rebuttals or rejoinders.

(Rest assured my countrymen, that I will collect from the family with a debt of P203 billion in estate tax. I will get that P200 billion and I will give it to farmers, drivers as aid for people who really need the help.)

After Moreno spoke, Lacson raised his hand to signify he wanted to say something. What might have been assumed to be a rebuttal turned out to be an expression of agreement.

“Gusto ko lang dugtungan ‘yung sinabi ni Mayor Isko. Tama ‘yon,” said the older statesman, explaining that from all the tax packages passed by the Senate to address the pandemic, they only amounted to over P100 billion in collections. (I just want to add to what Mayor Isko said. That’s correct.)

(There’s already P200 billion, it just needs to be collected, why is it not being collected by the BIR?)

After an interjection by Faisal Mangondato about federalism, Robredo also volunteered to speak. She, too, agreed with Moreno.

(I support what Mayor Isko and Senator Ping said because now we don’t want to suspend the excise tax because we don’t have money…. This is P230 billion. If we collect this, we won’t have to scrimp on our countrymen.)

Then De Guzman signaled he, too, wanted to say something about excise tax. He added his longstanding call to impose a wealth tax on the country’s richest. But he wrapped up his remarks by going back to Moreno’s demands about the Marcos debt.

“Sang-ayon ako, pare. Kailangan natin kunin ‘yung P203 billion na ‘yon,” said the labor chief, chuckling as he turned to Moreno who stood beside him. It was a rare moment of light camaraderie among political rivals during a tense debate.

Moderator Luchi Cruz-Valdez even had to remind the two candidates that they were not allowed to talk to one another during the debate.

As Marcos skipped the event, he had no chance to immediately respond to the calls of four of his rivals for Malacañang.

Moreno’s move won him praise from Rappler editorial consultant and columnist John Nery who judged him the “strongest” performer at the debate for driving home the point of Marcos’ absence.

“If we had to name a person who won the debate I would think it would be Isko Moreno,” said Nery during a Rappler Recap of the event.

“I think he needed to do something out of the ordinary today and he did it. He needed to attack Marcos without coming across as too aggressive. He did that by not naming Marcos’ name at all. But the reference to the P203 billion in tax arrears was very clear,” added Nery.

The veteran journalist also appreciated Moreno’s “clever” two-birds-with-one-stone jab at the presidential race front-runner when he emphasized that the tax debt was not “fake news” but a decision affirmed by the Supreme Court.

The swipe was an allusion to Marcos benefiting from a vast disinformation network that has sought to sanitize the family’s image.

Bringing up the Marcos estate tax debt was a strategic move for Moreno to amplify a talking point he and his campaign team have been driving home for weeks.

Moreno first raised the Marcos estate tax deficiencies during a February 28 press conference. He had told reporters then that he actually intended to mention the issue during the CNN Philippines presidential debate the day before.

A few days later, his campaign manager Lito Banayo and Aksyon Demokratiko chairman Ernest Ramel called a press briefing specifically to criticize Ferdinand Marcos Jr. and again bring up the estate tax debt. The publicity bore fruit when Marcos spokesman Vic Rodriguez issued statements in response which were then further amplified by Moreno’s camp when Ramel wrote letters to the Presidential Commission on Good Government and the Bureau of Internal Revenue about the tax deficiencies.

During a campaign rally in Cavite on Friday, or the day before the Comelec debate, Moreno made his most scathing comments about Marcos Jr. – bringing up the unpaid taxes again, the supposed emptiness of Marcos’ “unity” promise, among other jabs. Clearly, the Manila chief is out to shave the lead of presidential race front-runner Marcos. With his coup at the Comelec debate, will the issue gain even more traction? – Rappler.com