TAKE TO THE STREETS. Isko Moreno and Aksyon Demokratiko candidates go on a motorcade around Bataan on March 2, 2022. Pia Ranada/Rappler 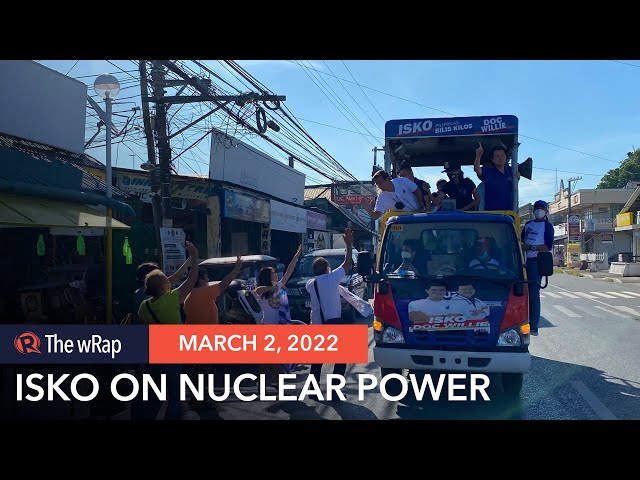 BALANGA CITY, Philippines – Presidential candidate and Manila Mayor Isko Moreno said he would rather turn to renewable energy and natural gas as alternative power sources, instead of nuclear power.

At the start of campaign sorties in Bataan on Wednesday, March 2, he also rejected the revival of the Bataan Nuclear Power Plant.

“I don’t think the Bataan Nuclear Power Plant today is suitable for power generation. We have to close it down, wala na ‘yan. Hindi na ‘yan safe para sa taga Bataan (It’s not safe for Bataan residents), definitely,” he said during a doorstop interview at Pilar town.

Asked what he thought of nuclear power in general as a possible source of energy in a country with some of the highest electricity rates in Southeast Asia, Moreno said he would only turn to it as a last resort.

(There are many sources of energy, many ways – renewable energy, gas, or coal. Until there is technology available that is less harmful or with less effect on the environment, I will prioritize those.)

Moreno pointed to renewable energy innovations in the Netherlands where wind turbines have been built on sea dikes.

In contrast, presidential race frontrunner Ferdinand Marcos Jr. has expressed openness to reviving the Bataan Nuclear Power Plant built during the regime of his father, the late dictator Ferdinand Marcos.

Last January, Marcos even claimed in a DZRH interview that the closure of the plant was due to “politics” and not safety concerns.

“We really have to look at nuclear power. Let’s not politicize it. Once again, follow the science,” he said.

Back in March 2020, the possibility of adding nuclear energy to the country’s energy mix was raised with President Rodrigo Duterte. No less than Energy Secretary Alfonso Cusi championed developing nuclear power to meet the projected increase in demand for affordable electricity and the dwindling sources of power, like the Malampaya Natural Gas Fields, set to see depletion of its gas reserves in 2027.

But months later, in October, Duterte said he wanted Bataan residents consulted first on plans to revive the Bataan Nuclear Power Plant, the country’s first and only power plant built during the regime of Ferdinand Marcos and now defunct.

The plant was never used as it was closed down by President Corazon Aquino in 1986 due to safety concerns following the Chernobyl nuclear disaster in Russia that year.

In 1980, US nuclear engineer Robert Pollard of the now-defunct US Atomic Energy Commission also visited the Philippines to inspect the BNPP. Among his findings were that the plant would not be safe, reliable, and inexpensive. – Rappler.com