Facebook Twitter Copy URL
Copied
(1st UPDATE) The Manila Mayor comes prepared for the most persistent controversy of his campaign, bringing on stage a BIR receipt proving he paid taxes for his unspent 2016 campaign funds

MANILA, Philippines – For the third time, Manila Mayor Isko Moreno found himself on the defensive on the issue of excess campaign funds during a televised presidential forum.

This question during the CNN Philippines presidential debate on Sunday, February 27, was the trickiest for the presidential bet. 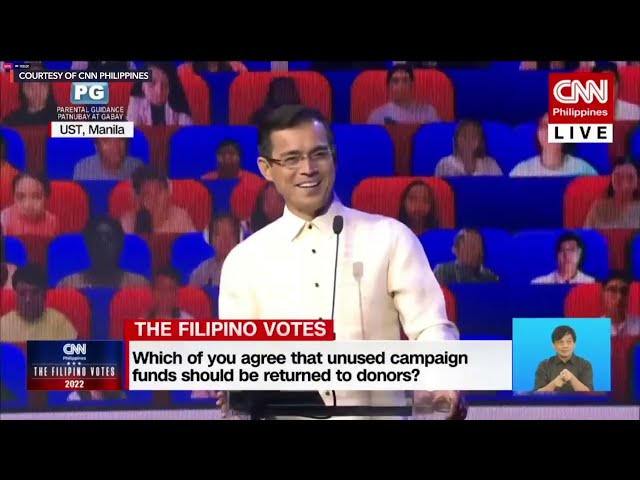 For the rest of the forum, Moreno was able to answer all questions with varying degrees of concreteness. But he tellingly also left out any verbal fireworks pertaining to the two presidential rivals ahead of him in voter preference surveys – ex-senator Ferdinand Marcos Jr. and Vice President Leni Robredo.

Moreno was the only candidate in the debate to disagree with the proposal that excess campaign funds should be returned to donors.

The question appeared to be tailored to him since he has gotten flak for keeping P50 million in campaign funds he failed to spend during his 2016 senatorial bid.

While other candidates then, including Robredo herself and even President Rodrigo Duterte also had excess campaign funds worth a few million, Moreno’s funds stood out because of the relatively large amount.

Moreno explained his answer: he doesn’t want to be accused of hypocrisy.

(I did not return the excess campaign funds but I fulfilled my duty as a citizen to pay taxes.)

“That’s why wala akong (I don’t have the) moral ascendancy, to answer the question, in favor,” he added.

Moreno then admitted he “doesn’t know” what he would do in the future about excess campaign funds but he believes the legislature “should pass a law that requires these kinds of questions later on so that we can resolve it properly and fairly.”

What the 47-year-old candidate wants is a new set of rules to clarify where excess campaign funds should go because current tax rules say a candidate can keep the funds as long as they pay the right tax – something he has been pilloried for.

Moreno was ready to face the controversy again – he even brought with him the Bureau of Internal Revenue receipt to prove he paid the proper tax.

Moreno might have breathed a sigh of relief after attention was diverted to candidate Jose Montemayor Jr. who immediately falsely accused him of accepting $15 million from American philanthropist Bill Gates.

“It’s not true. I don’t know where did you get it,” said Moreno who was able to convince Montemayor that the information was false.

“I’m satisfied with that,” said Montemayor.

In 2020, the Bill and Melinda Gates Foundation donated around P16 million to Moreno’s Project Kubeta for Manila, a program to improve sanitation services for the urban poor.

This donation was to City Hall, not to Moreno’s campaign.

While the excess campaign funds issue was Moreno’s biggest hurdle during the three-hour debate, there were also no verbal fireworks that set him apart from his rivals on stage.

Moreno appeared to be intent on just drilling home key messages of his campaign and his 10-point economic platform than causing a stir and generating big headlines.

Some, like Rappler editorial consultant and veteran journalist John Nery, predicted that Moreno would turn on Robredo and Marcos to gain an edge over the two.

After all, Moreno has consistently been implying in his campaign sorties that the two embody the “elitist politics” he wants to challenge.

Instead, Moreno appeared to play it safe, sticking to his policy proposals.

He kept repeating phrases like “buhay at kabuhayan” (lives and livelihood) and his insistence that he “gets things done,” based on his achievements as Manila mayor.

His platform served him well, giving him ready answers to questions like how to deal with corruption (his answer: digitize, just like he did in Manila with the Go Manila app), how to keep nurses from going abroad (17 modern regional hospitals to provide good-paying jobs for them), how to balance interest of consumers and manufacturers (halve oil and electricity taxes to lower inflation but also condone debts of agrarian reform beneficiaries). But those who were expecting Isko Moreno to be a staunch defender of democracy may have been left wanting by his stance on Russia’s invasion of Ukraine.

Moreno fixated on the time element of the question: Do you agree with Defense Secretary Delfin Lorenzana that the Philippines should remain neutral on the Russia-Ukraine crisis for now?

(The question is ‘for now.’ Yes, for now, we need to be neutral because what matters to me is the Filipinos still in Ukraine where bullets are flying, we have to evacuate them to a safe country like Poland first.)

But his response left many people hanging in terms of the bigger picture – if his administration would take a pro-democracy stance by siding with Ukraine, a democratic country being invaded by Russia’s autocratic leader Vladimir Putin.

CNN Philippines reporter Paolo Barcelon was able to ask Moreno this follow-up after the debate. Moreno’s answer was similar to Senator Panfilo Lacson’s.

“We will abide with our relationship to [the] United Nations, kung tayo ay may mga obligasyong dapat tupdin sa kapwa nating bansa, gagawin natin. We must [pull] through with our commitment, to our promise,” said Moreno.

(We will abide by our relationship to United Nations, if we have an obligation to our fellow nations, we must fulfill it. We must pull through with our commitment, to our promise.)

Moreno, dapper in a long-sleeved barong, may have strode onstage with the bearing and look of a president, but it remains to be seen if playing it safe, rather than strong statements with a punch, will convert more voters. – Rappler.com