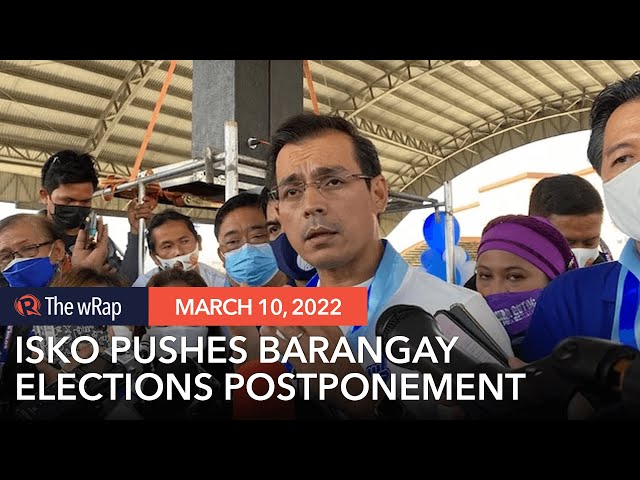 CABANATUAN CITY, Philippines – Manila Mayor and presidential candidate Isko Moreno agrees with calls to postpone the barangay elections slated for December, saying the billions of pesos it would cost could be used to help struggling Filipinos instead.

(If I will be asked, elections would just be over – the May general election, and this will cost us between P7 to P8 billion. Now, if we have another elections in [December], the government will spend another P8 billion so, for me, let’s extend barangay election for anoither year or a year and a half.)

The barangay and Sangguniang Kabataan elections will take place on December 5. The Duterte government asked for P8.4 billion to conduct it, in its 2022 budget.

Use poll funds for aid

Moreno said these funds can be used to aid Filipinos while the country has not yet fully recovered from the COVID-19 pandemic and with the rise of gas and oil prices due to the Ukraine-Russia crisis.

(The money to be used for elections, let’s use it first as aid for people, like for gas or food aid, or so the government can buy fertilizer to distribute to farmers.)

Back in November, Davao Oriental Representative Joel Almario filed a bill seeking to postpone the December 2022 barangay and SK polls to May 9, 2024. His rationale was that the new set of national and local officials to be elected in May would benefit from the experience of current barangay officials who have been on the frontlines of COVID-19 response.

This means that the barangay and SK officials elected in 2018 will have been in power for almost five years, exceeding their usual three-year term. If elections is again postponed by a year or a year and a half, they would be in power for six to six and a half years. – Rappler.com