LUCENA CITY, Philippines – Manila Mayor and presidential candidate Isko Moreno would return to the negotiating table with the Communist Party of the Philippines (CPP) to renew hopes of peace between the group and government should he win the presidency in May.

Moreno, speaking to media on Monday, March 21, while campaigning in Lucena City in Quezon province, said he would “look into” dropping the Philippine government’s designation of CPP and its armed wing New People’s Army (NPA) as terrorists.

“Basta ako, yung peace talks, we must seek for it as much as possible. Not only [with] the Communist Party but [with] those other, alam naman natin may ibang armed group pa,” said Moreno.

(For me, we must seek for peace talks as much as possible. Not only with the Communist Party but [with] other armed groups.) 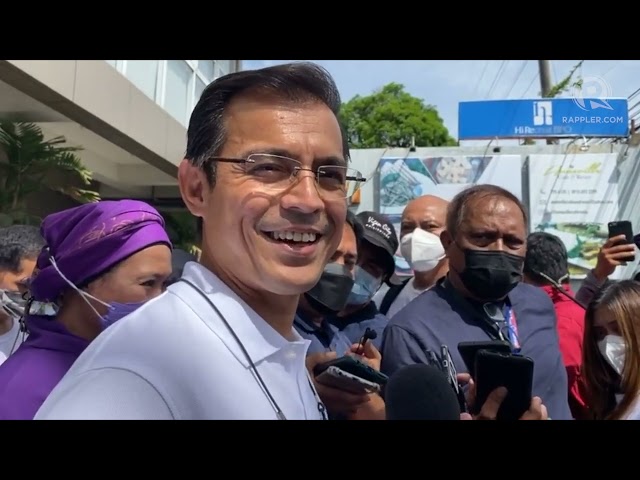 But Moreno, who used to serve as a consultant during peace talks for the National Democratic Front or political arm of CPP, stressed that he will not go along with any effort to bring down the government. He has previously rejected the idea of forming a coalition government with the Left.

“But at the end of the day, ito ay mga kababayan natin na maaring kailangan ng atensyon, kailangan may tainga, kailangan mapakinggan. I hope when they come to the table, I hope they will meet us halfway,” said Moreno.

“Dapat hindi lang one side para naman may matapos na (It should not be one-sided, so that the fighting ends). Stop throwing bullets against each other as Filipinos. Tingin ko, lahat naman ng bagay may tuldok (I think all things have an ending),” he continued.

Quezon, where Moreno is campaigning on Monday, remains one of the hotspots for NPA activity. The province is the country’s 13th most vote-rich, with 1.4 million registered voters based on Commission on Elections 2022 data.

But would a Moreno administration drop the terrorist designation given by the Duterte administration to the CPP-NPA through its new and controversial Anti-Terrorism Council?

“We’ll look into it. But for the mean time, if they’re willing to talk and they want a peaceful way of living, karapatan din nating kapwa Pilipino (it’s our right as Filipinos). Nowadays, it’s very hard to find peace,” said the Manila chief.

President Rodrigo Duterte had also started his term on friendly footing with the Left, even appointing some of them in his Cabinet and declaring a unilateral ceasefire during his first State of the Nation Address as a confidence-building step for his government’s first round of talks.

But in November 2017, the talks collapsed when Duterte formally ended them, outraged by the death of a baby allegedly during an NPA ambush in Bukidnon.

Moreno himself participated in the Duterte-time peace talks with the CPP-NPA-NDF. After he lost in the 2016 senatorial race and before he won Manila’s 2019 mayoral election, Moreno was tapped by the NDF as a consultant. He was present in peace talks held in Rome, Norway, and the Netherlands in 2017.

CPP founder Joma Sison told Rappler Moreno was recommended by “progressive professionals” to the NDF panel because of his concern for the urban poor. Being an NDF consultant does not mean membership in the NDF. – Rappler.com