TEAM EFFORT. Isko Moreno, his wife Dynee, and four of his children are onstage at the 'Isigaw Mo, Isko' concert and rally on April 10, 2022. Photo from Isko Moreno Campaign Team 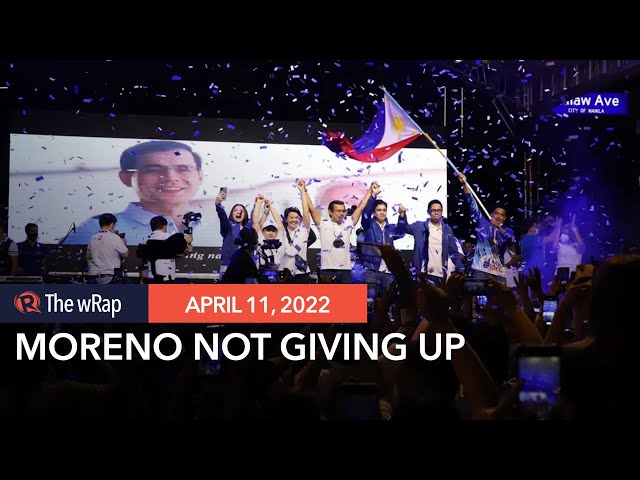 MANILA, Philippines – During a concert-rally meant to be a show of force of his supporters in his bailiwick, Manila, Isko Moreno declared he will not give up on his dreams for the presidency, no matter what surveys say.

“Hangga’t hindi kayo sumusuko, itutuloy ko ang laban hanggang dulo! (Until you have not yet given up, I will continue the fight until the end!)” said the Manila mayor before a large crowd on Orosa Avenue corner Kalaw Avenue on Sunday, April 10.

Organizers estimate the gathering to have numbered 80,000 people, the largest crowd Moreno has attracted in Metro Manila. City police gave an estimate of 50,000, but that was as of 7 pm. The concert stretched to 10 pm.

If the organizers’ figure is accurate, it is 61% of the crowd estimate of Vice President Leni Robredo’s biggest Metro Manila rally, PasigLaban held on March 20, which numbered more than 130,000 people.

The rally and concert for Moreno was called “Isigaw Mo, Isko!” (Shout, Isko!) and featured several artists and performers, many of whom have declared their support for the Manila chief.

Moreno appeared heartened by the crowd, mouthing “ang rami” (so many) as he strode onstage to address the sea of people wearing white and blue shirts and waving banners, posters, and flags.

Some 80% of the crowd came from Metro Manila while the rest were from nearby provinces like Pampanga, Batangas, Bataan, and Laguna, said Moreno.

He emphasized in his speech that supporters spent their own funds to attend the rally, alluding to videos of cash being distributed to participants in rallies for Ferdinand Marcos Jr. and Sara Duterte in Cavite, for example.

As the Manila Mayor mouthed his refrain that he is the candidate for Filipinos who are tired of the Marcos-Robredo quarrel and the dominance of the same political names and parties, his supporters chanted, “Isko naman!” (Choose Isko instead!)

He called on them to “make noise” with their cellular phones, to use them to convert as many people as possible to Isko voters.

For the first time, Moreno brought four out of his five children to a rally, along with his wife, businesswoman Dynee Domagoso. 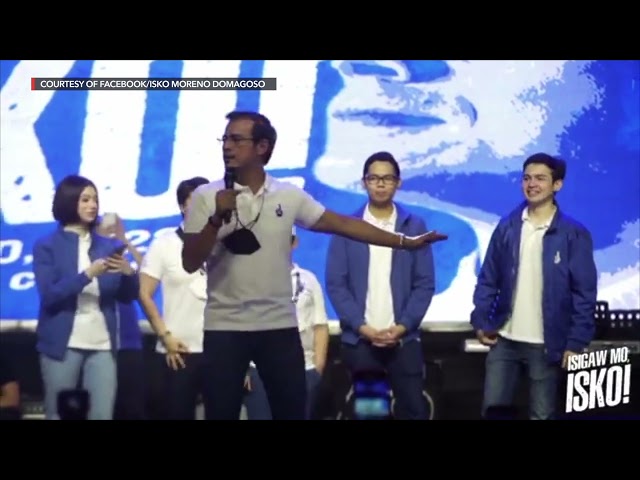 Patrick, 24; Frances, 21, their only daughter; actor Joaquin, 20; and their youngest, 9-year-old Drake, strode onstage. Another son, 16-year-old Franco, was not present as he was working on a school assignment, said Moreno.

It was only for his presidential bid that members of his family actively joined him in an electoral campaign. Dynee, who had usually worked behind the scenes, joined some campaign events and supporter events. But it was her first time appearing at an event with her husband last Friday, April 8, in Cebu. She was joined by Joaquin, who was already appearing at campaign events last year but had to stop for a while to attend to his showbiz career. Patrick has also been appearing at Visayas events, according to Dynee.

The last two are supporters of President Rodrigo Duterte. Bondoc is even a Duterte appointee, serving as vice-president for community relations at the Philippine Amusement and Gaming Corporation (PAGCOR).

The large Isko gathering was held amid calls from one of his volunteer groups to consider withdrawing and supporting Robredo’s candidacy instead, due to Pulse Asia survey figures showing she is at second place after Marcos Jr.

Moreno has responded to such calls by saying the crowds he is able to draw at campaign events belie survey results.

“Sa kanila na ‘yung survey, akin na lang ‘yung tao (They can have the surveys, I’ll just have the people),” he said during a media interview at the concert.

His own team is also pointing to other surveys which show he is polling just as well as Robredo. – Rappler.com