ILIGAN CITY, Philippines – Manila Mayor and presidential candidate Isko Moreno declared he would defend Philippine maritime rights by himself heading to Panatag Shoal (Scarborough Shoal). But unlike President Rodrigo Duterte who famously promised to take a jetski to the Spratlys to plant the Philippine flag on its soil, Moreno would take a Navy frigate.

“If I need to be with the fisherfolks, I’ll be with them. If [Ukrainian President Volodomyr] Zelenskiy can do it we can do it also,” said Moreno on Tuesday, March 29, in a media interview in Gitagum town, Misamis Oriental. 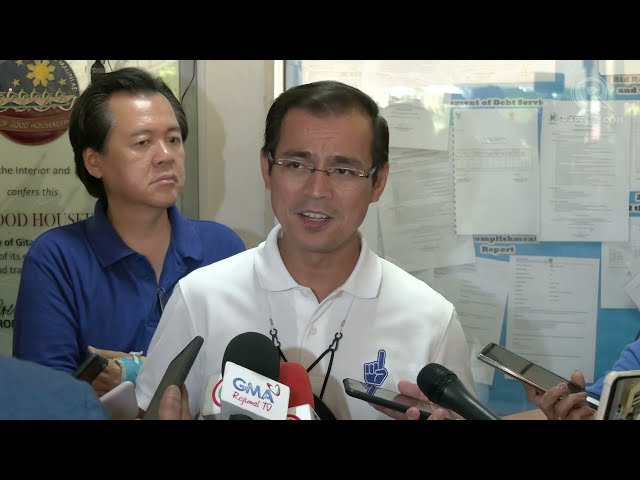 Asked if he was making a “jetski” promise like Duterte, Moreno said, “No, not jetski. Hindi aabot ang jetski doon. Mayroon naman tayong frigates.” (A jetski won’t reach that area. We have frigates.)

“I’ll be there. Why not? Not through jetski. I’m going to be fair to you and I don’t want to overpromise things. But we’ll be there, we’ll protect our fishermen. We need to fish in our ocean, within our sovereign territory,” said Moreno.

Asked if such a move might spark more aggressive behavior from China, the presidential bet did not directly answer the question. He only said he would not go to war “unless it’s unavoidable.”

“Tayo, hindi tayo makikipag-away pero tandaan mo, hindi rin tayo nagpapaapi,” said Moreno. (We will not pick a fight, but remember, we will also not let ourselves be taken advantage of.)

Panatag Shoal, also called Bajo de Masinloc, is within the Philippines’ 200-mile exclusive economic zone. The country does not have sovereignty, but sovereign rights, over the area. This means the Philippines must be able to exclusively enjoy resources like fish, natural gas, and oil from its depths.

But the 2016 Hague ruling did not decide on who has sovereignty over Panatag Shoal. Instead, it merely recognized it as a traditional fishing ground for many nationalities, including Filipinos and Chinese.

The Manila mayor’s supposed plan is not as far-fetched as Duterte’s 2016 “jetski” promise which the President himself had called a “campaign joke.”

Moreno said it was based on something that another Southeast Asian leader had done. In 2016, Indonesian President Joko Widodo held a Cabinet meeting aboard a warship off Natuna Islands, to make a point to China which was then encroaching on Natuna Sea, within his country’s exclusive economic zone.

The move was praised by observers as a bold messaging move and a show of strength on Widodo’s part.

Moreno seems to be patterning much of his intended approach to China and the West Philippine Sea to the approach taken by Widodo. The mayor first spoke of adopting Widodo’s strategy in November 2021.

He’s also said he would use the Philippines’ military alliance with the United States to beef up maritime defense and would pick a retired Navy chief as defense secretary.

In discussing the West Philippine Sea issue, Moreno found a way to mention the huge Marcos estate tax debt he has turned into a major campaign message.

The Aksyon Demokratiko standard-bearer said some of the P203 billion in estate tax deficiencies could be used to purchase boats for the Coast Guard.

“For purposes of simple mathematics, if a Navy ship, a Coast Guard [ship], medium size, with good enough speed, costs about $10 million then that’s P500 million most likely. If we buy 10, that’s just P5 billion,” he said in Filipino.

There would still be P198 billion with which to fund other possible programs like distributing free fertilizer to farmers or cash assistance to needy sectors, said Moreno. – Rappler.com