IN THE NORTH. Aksyon Demokratiko presidential candidate isko Moreno meets and speaks to supporters in Quirino province on March 3, 2022. Rappler

MANILA, Philippines – Presidential candidate Isko Moreno, who has frequently invoked his “fear of Jesus” in taking certain policy positions, thumbed down the use of a church or religious building for campaign rallies.

Days before, his campaign manager Lito Banayo was more specific – he referred to a rally held for Vice President Leni Robredo and running mate Senator Kiko Pangilinan in or near certain churches. 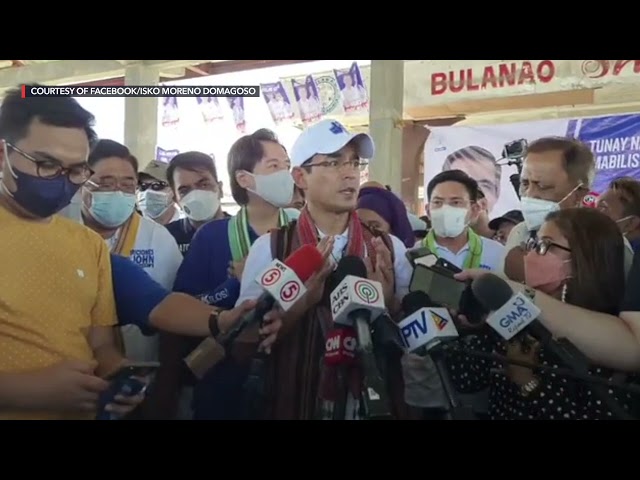 Moreno, on Saturday, March 5, said the use of these religious places for big, noisy campaign events is disrespectful.

(The posters are there, the shouting is there. I am a Catholic, I am fearful of God. Let’s not use the inside of a church as a rally area.)

The Aksyon Demokratiko standard-bearer said the church as a rally venue gives the impression to some Catholics that a certain political group “owns” the church.

“Katoliko rin kami, hindi lang po kayo may-ari niyan. ’Yan po ay pag-aari ng lahat ng kasapi ng Simabahang Katoliko (We are also Catholic, you are not the sole owner of that. That is owned by all members of the Catholic Church.),” said Moreno.

Moreno’s criticism comes after a string of endorsements of his rival, Robredo, by Roman Catholic Church leaders.

It was not clear which specific Robredo-Pangilinan rallies held in churches Moreno was referring to. But last Tuesday, March 1, Robredo spoke at the Novaliches Cathedral, which drew supporters carrying pink paraphernalia to the church. Robredo’s presence in the cathedral means religious leaders there allowed her to speak and use it to address supporters.

On February 12, a large crowd had also massed outside the St. Joseph Cathedral in Balanga City in Bataan after she was invited by Bishop Ruperto Cruz Santos to speak on its balcony.

In contrast, when Moreno and his team visited the same cathedral last Wednesday, the Bishop presided over a private mass and treated them to a private breakfast.

Banayo said Moreno’s team deliberately makes church visits a private affair, out of respect for the separation of church and state.

(Because we don’t want to compromise the bishops, the priests. Because the advice of the Pope, Pope Francis, is clear – that the Catholic Church should not interfere in politics.)

“They can preach moral values but to use a church itself [as] a focal point of a rally, mukhang hindi naman kaaya-aya ‘yon (that doesn’t seem ideal),” he added.

In response, Lingayen-Dagupan Archbishop Socrates Villegas said in a Rappler Talk interview: “The Church should always be nonpartisan, but the Church cannot be neutral kapag ang pinag-usapan ay good or evil (when we talk about good or evil).”

But it’s important to note that the pro-Robredo events have so far been held outside of masses and that the church has not forbidden any events to be held in support of other candidates.

There is, however, a raging debate within the Catholic Church how far its leaders should go in showing support for an electoral candidate. – Rappler.com