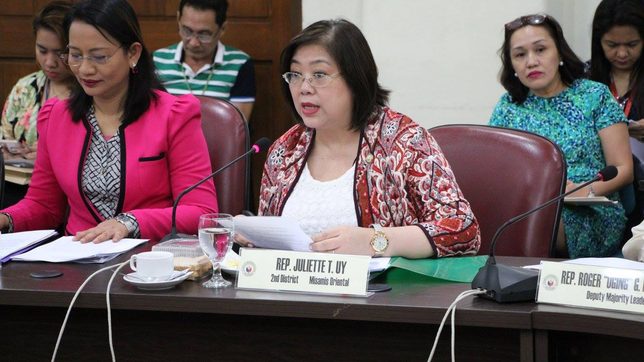 RUNNING. Already serving her third and final term as a congresswoman, Juliette Uy comes from a political family that has entrenched itself in the western part of Misamis Oriental.

Misamis Oriental 2nd District Representative Juliette Uy filed her certificate of candidacy for provincial governor, a post being eyed by two other seasoned local politicians, while her husband Julio is seeking her congressional post in the 2022 elections.

The Uy couple submitted their COCs before the provincial office of the Commission on Elections on Thursday, October 7.

Already serving her third and final term as a congresswoman, Uy comes from a political family that has entrenched itself in the western part of Misamis Oriental.

Their daughter Jennie Mendez is the mayor of Villanueva, a vote-rich industrial town in western Misamis Oriental, where the couple also served as local chief executive on separate occasions.

Uy’s husband Julio, who has served as vice governor of Misamis Oriental for two consecutive terms, is running for congressman in the 2nd District against Governor Yevgeny Vincente Emano, who held the post before his election as provincial chief executive in 2013.

The Uys also launched the bid of the daughter of late former Misamis Oriental congressman Danilo Lagbas, Karen, for the congressional post in the 1st District, a position now being held by Unabia’s son Christian. Karen also filed her COC together with the Uys. – Rappler.com