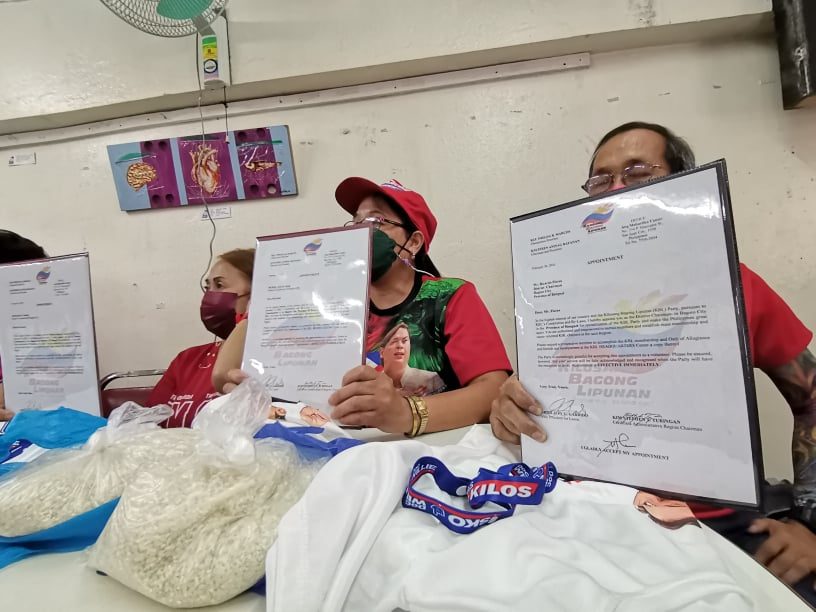 SUDDEN REVERSAL. Leaders of KBL Baguio-Benguet, who switched from Ferdinand 'Bongbong' Marcos Jr. to Isko Moreno just three days ago, backtrack from their earlier statements and show materials allegedly used to lure them into backing Isko Moreno for the upcoming national and local elections.

Facebook Twitter Copy URL
Copied
Aries Mendoza, the chairperson of the Alliance for Isko Movement Cordillera, challenges the Baguio-Benguet chapter of the Kilusang Bagong Lipunan to prove their accusations

In a press conference, KBL Baguio-Benguet director Freneil Reyes said their provincial chair Bernard Ellamil and members “were framed up, lured into a situation, and given promises that they will receive some kilos of rice and P500 from the Isko camp.”

“KBL officers were asked to hold a certain piece of paper and were given t-shirts to wear as they pose for pictures…that would imply their withdrawal of support [for Marcos],” Reyes added.

Ellamil was not present at the press briefing. Rappler called and texted him for a statement but did not receive a reply. Rappler will update the story once he responds.

On April 13, Ellamil, with several Baguio district leaders, told the media that they were switching to Moreno, citing several grievances against the Marcos camp.

District coordinator Mary Jane Bagay, who complained of undelivered allowances on April 13, retracted her statement. She said they were only invited for lunch and were not aware of what would happen.

“We were framed up and told just to ride along,” she said in Filipino.

Another coordinator, Mary Ann Galut, backed this claim, saying they were “sweet-talked (budol-budol)” to agree with what was going on.

The KBL said they are looking into probable election-related charges over the incident.

“Possible cases in violation of election laws will also be filed [against] the concerned people who are responsible [for] this ‘frame-up’ since evidence of ‘vote-buying’ in the form of money and goods were preserved,” KBL national president Efren Rafanan said in a written statement.

KBL vice president for Central Luzon Chris Garrido said they expect their leaders and members “to be sincere, uphold their functions, and observe command protocols.”

“KBL membership is all about volunteerism and expect no monetary considerations for their efforts,” he added.

Aries Mendoza, the chairperson of the Alliance for Isko Movement Cordillera, said it was Ellamil who contacted the media for the April 13 gathering. According to him, the leaders were aware of the nature of the activity. They were also briefed about the press conference even before members of the media arrived.

He pointed out that the KBL leaders should have left the place even before the press arrived if they disagreed with the announcement they were about to make.

He expressed confidence that people can easily discern if the KBL leaders were deceived into giving their statements once they view the press conference, which is available on Facebook.

“They know, among themselves, the truth. They were the ones who shared [their concerns]. If it was a setup, they should not have talked [before the media]; they were actually aware of what is happening,” he said in Filipino.

Mendoza also denied the allegations that they promised goods and money. He challenged the KBL to prove their accusations.

“Maybe they are now reaping criticisms that is why they are confused and stressed. However, there is no truth in their claim that they were [framed],” he added.

According to him, the leaders were actually ready for the press conference, noting that they even brought their KBL appointment certificates, which they planned to show during the photo opportunity.

“If they were just here for lunch, why would they have to bring their appointment [certificates]?” he asked. – Rappler.com