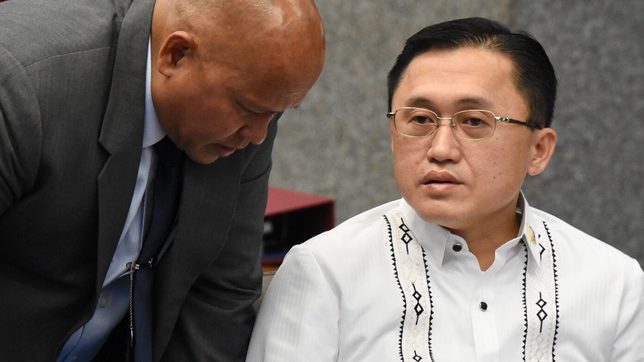 Senators Bong Go and Ronald dela Rosa confer with each other during the July 23, 2019 session.

Facebook Twitter Copy URL
Copied
'Persons who run on the spur of the moment for such important positions as President and Vice President are not serious candidates,' Senator Aquilino Pimentel III says

Pimentel questioned the two senators’ sincerity in filing their certificates of candidacy (COC) for the country’s top posts.

“Persons who run on the spur of the moment for such important positions as President and Vice President are not serious candidates,” Pimentel said.

He noted that not even the PDP-Laban wing led by Energy Secretary Alfonso Cusi sanctioned the senators’ surprise decisions to file their COCs.

Pimentel said, “The Cusi group totally disregarded their own processes. They had public ceremonies proclaiming their candidates. Not one of their decisions was followed.”

The Cusi faction had nominated Go as standard-bearer and President Rodrigo Duterte as his running mate in September. Go declined and Duterte accepted but the President announced later he had opted to retire.

Pimentel, a son and namesake of the late Partido Demokratiko Pilipino founder Aquilino “Nene” Pimentel Jr., said the candidates under the Cusi wing were misrepresenting the party.

“They will all be declared independents and may even face disqualification cases for misrepresentation in their CONA (certificates of nomination and acceptance),” said Pimentel.

A former Senate president, Pimentel was ousted as executive vice chairman of the administration-backed PDP-Laban faction in July.

The Cusi wing also removed Senator Manny Pacquiao as PDP-Laban president. Pacquiao filed his COC for President under the Cebu-based party Progressive Movement for the Devolution of Initiatives (Promdi).

The Cusi group has asked the Comelec to declare the Pacquiao-Pimentel faction as illegitimate.

Pimentel’s group also warned again on Saturday against moves to replace Dela Rosa and Go with substitute candidates, saying they would face the prospects of getting disqualified.

Pimentel said, “They better be prepared for the shock of their political lives when their power-grabbing group is not recognized and legitimized” by the Commission on Elections.

The Pimentel faction said the politicians who filed their COCs for various positions under Cusi’s group were independent candidates as far as they were concerned.

The “Sword of Damocles” would be hanging over the heads of Cusi’s candidates, substitutes or not, after November 15 “because we are ready to bring this all the way to the Supreme Court,” said Dr. Manuel Jaudian, deputy secretary general for Mindanao of the Pimentel-led faction of the PDP-Laban.

He said moves for Dela Rosa, Go, and other candidates under the Cusi wing to step aside in favor of substitute candidates would be questioned by their group.

“As far as we are concerned, they are independent candidates. Therefore, the substitution rule cannot apply in their case. We will demand that they show what authority they have for exercising that right to run under the PDP-Laban,” he said.

Jaudian added, “We are the legitimate PDP. That should be resolved by the Comelec. If the Comelec does not rule in our favor, then we will bring our case elsewhere.” – Rappler.com