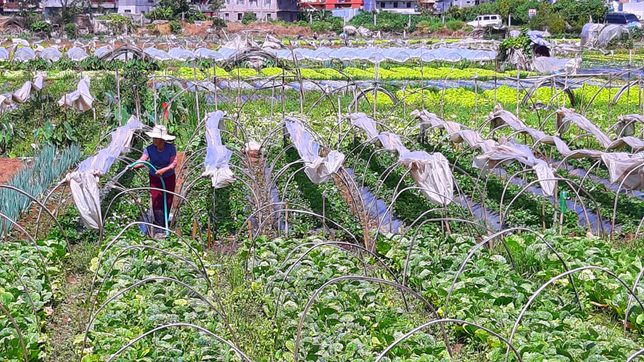 FOCUS ON AGRICULTURE. This file photo shows La Trinidad, famously called the Salad Bowl of the Philippines due to its huge production of upland vegetables as well as its shape.

There are a lot of problems in the Philippine education system, said presidential aspirant Senator Panfilo Lacson, and one of his proposed measures includes making some State Universities and Colleges (SUCs) focus on agricultural courses.

In a forum organized by the Financial Executives Institute of the Philippines, Lacson said that the mindset of the youth towards the aging agricultural workforce should change.

(This is just top of mind. The youth seemed to always be focusing on liberal arts. Why not introduce a new concept wherein SUCs, especially those in agricultural areas, instead focus on courses pertaining to agriculture and other technical courses?)

When he presented his platform, Lacson said that the government should provide technical support to farmers in a bid to liberate them from the control of middlemen. He is also pushing for a higher rate of irrigated farmland in the country.

Speaking to Metro Pacific Investments Corporation’s Mike Toledo, who moderated the forum, Lacson said that if Toledo were to be asked by his parents to be an agriculturist, he might have disagreed with them.

The presidential aspirant also noted the low “growth mindset” among Filipino students. He cited the 2018 Programme for International Student Assessment which found that only 31% of Filipino students think they can improve their intelligence through hard work.

“This means that 69% of 15-year-olds no longer want to grow. They are not motivated to study anymore.… We should change that mindset. That’s really dangerous,” said Lacson in a mix of English and Filipino.

Recently, a World Bank report showed that poor learning results were observed among students in the Philippines, with more than 80% falling below the minimum levels of proficiency expected of them.

‘Something wrong’ with welfare programs

Aside from education, Lacson also pointed out that some welfare programs have “something wrong somewhere.”

In the recent budget hearing of the Department of Social Welfare and Development (DSWD), the senator noted recurring problems in the Pantawid Pamilyang Pilipino Program (4Ps) and the supplemental feeding program of the government.

In that hearing in October, Lacson said that the DSWD should “recalibrate” its feeding program.

Lacson on Saturday cited a UNICEF report that stated that a third of Filipino children are stunted.

“Our accomplishments are very poor,” he said. “There is something wrong somewhere because we haven’t been improving the stunting rate among Filipino children.”

“We are funding so many programs. Ang tawag nga nation [sa 4Ps], ‘Pantawid’ pamilya. Dapat ‘Pang-ahon.’ Kasi kung pantawid lang, tatawid lang. Walang asenso.… Instead of just giving them ayuda, dapat may purpose na someday, they will graduate and reap the fruits of the ayuda,” he said of the conditional cash transfer program.

(We are funding so many programs. We even call 4Ps, the ‘bridging’ program for Filipino families. Instead, it should be a ‘rising’ program. Because if it’s only to help make ends meet, then it will only be that. There would be no advancement in life. Instead of giving them aid, there should be a purpose that someday, they will graduate and reap the fruits of the aid.)

Lacson is running for president under Partido Reforma, with Senate President Vicente Sotto III as his running mate.

Part of his platform is reinventing the Philippines’ 4Ps with the principle that poverty should be bridged “with a sustainable livelihood or employment opportunities.”

He is also proposing a cash-for-work program that would also be done in partnership with corporations’ social responsibility arms and a paid internship program in the private and public sector. – Rappler.com