During her jam-packed people’s rally in Sta. Rosa, Laguna on April 29, Laguna 3rd District Representative Sol Aragones, who is running for governor, appeared on stage to declare her support for Robredo. 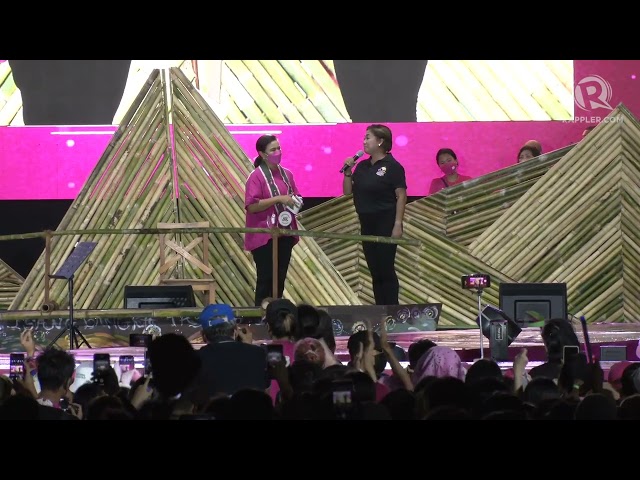 The former broadcast journalist, who is on her last term as congresswoman, has close ties with Robredo forged during the 16th Congress, when both of them were neophyte lawmakers.

(We have a strong friendship. And in the hardest point of our lives and of our fight, I’m letting you know, I’m letting everyone know that your friend is here – I will never let you down. My prayer. My prayer every night, may we both succeed in this fight.)

“Sana sa Mayo 9, sabay nating pagtagumpayan ang laban nating ito. At sana, Pilipinas, Laguna, sa Mayo 9, sana babae naman, President Leni Robredo (I hope on May 9, may we both succeed in this battle. And I hope in the Philippines, in Laguna, on May 9, women will succeed),” Aragones added

Fernandez is a member of the National Unity Party, which endorsed Marcos Jr.

“Madam Vice President, I will make a bold prediction. Pakinggan ‘nyo ito(Listen to this)…. What has been done will be done again. Nothing changed under the sun,” Fernandez said in his speech.