Over 100 law deans, professors endorse Robredo, reject Marcos who ‘does not know’ Constitution Residents of Valencia City, Bukidnon lined up along the highway to welcome Vice President Leni Robredo and her caravan from Valencia City Hall to San Agustin Parish. Robredo met with Valencia City Mayor Azucena Cuervas, Vice Mayor Paul Murillo, and the Valencia City Council at the City Hall. Supporters listened to the presidential candidate on the steps of the city hall as she delivered her message of thanks for their efforts before she continued on to Malaybalay for the People's Rally organized by the people of Bukidnon for her. (VP Leni Media Bureau)

Facebook Twitter Copy URL
Copied
(3rd UPDATE) UP Law students and alumni also back Leni Robredo’s candidacy on March 13, saying a Marcos comeback ‘debases the memory of all who have suffered and died under his family’s rule’ 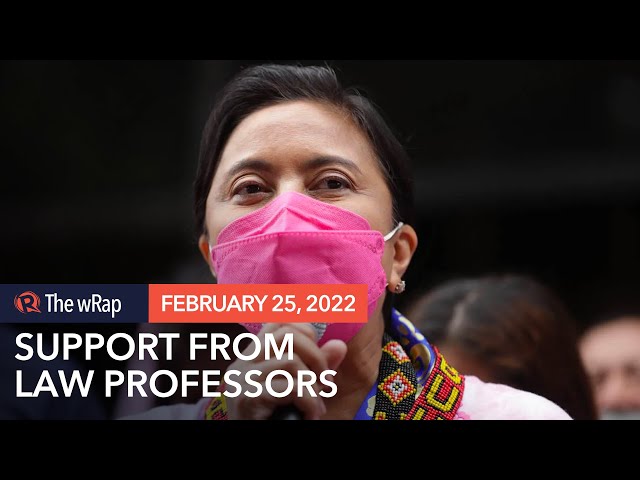 MANILA, Philippines – In an unprecedented move, more than 150 law deans and professors nationwide released on Friday, February 25, a statement endorsing Vice President Leni Robredo, and stressed that this also carries a rejection of her key opponent in the May presidential race, Ferdinand “Bongbong” Marcos Jr.

“There have been too many transgressions of our constitutional rights during this most repressive regime… Enough. The rule of law in our country must be restored. We trust Leni Robredo to achieve this, to make this happen,” said the statement released on the 36th anniversary of the EDSA People Power revolution that ousted the late dictator Ferdinand Marcos.

“We include in this expression of our fullest support for Leni Robredo our strongest rejection of the present efforts of the son of a deposed dictator who, with all and nothing but arrogance and who is evidently without any proven measure of real competence, now seeks to return to Malacańang,” they said.

Several law professors of the University of the Philippines (UP), a bastion of dissent during the Marcos dictatorship, also signed the statement.

In a stinging criticism of the presidential frontrunner, they said: “He has offered no concrete platform or any tangible program of government. He has not expressed a clear commitment to uphold the rule of law, our Constitution. Indeed, he has, on many occasions, made it clear that he does not even know, or understand, our Constitution.”

“All he has, and he invokes this constantly, is his surname. No. Never again,” said the law professors who include Joan Largo, former law dean of the University of San Carlos in Cebu; Arno Sanidad, law professor at DLSU-Manila; John Molo of the UP College of Law; Carlo Cruz of Lyceum College of Law and Ray Paolo Santiago of Ateneo de Manila.

“We will oppose him. We cannot and will not allow this,” they added.

Marcos’ father, the late dictator Ferdinand Marcos, was a UP-educated lawyer. His daughter Imee Marcos lied about getting a UP law degree, while the presidential candidate also lied about finishing a bachelor’s degree in Oxford and a master’s degree in Wharton.

Former presidents of the Philippine Bar Association, including officials of the Arroyo administration, also earlier expressed their support for Robredo’s candidacy.

UP law alumni, students back Robredo

On Sunday, March 13, over 1,300 students and alumni of the UP College of Law signed the statement of support for Robredo’s candidacy.

“We are at a point when ambition or profit blinds many from the important values which hold our nation together; when the thirst for power motivates many to twist the law to serve selfish ends,” the statement read.

The signatories noted the importance of the 2022 elections, which comes at a time when the country is still recovering from the gutting impacts of the pandemic.

“Our failure to make the right choices in the May 2022 elections would mean more suffering for the Filipino people, more oppression and more injustice,” they said.

“Leni Robredo provides leadership from the front. This is what we need to climb out of our present predicament. To rebuild our economy, to rework our justice system, to preserve our national patrimony, we need a leader who inspires. Leni Robredo is that leader,” they added.

The alumni and students of UP Law also denounced the threat of a Marcos comeback. Marcos has been consistently topping pre-election polls. If the dictator’s son maintains momentum, he would be the first majority president post-EDSA People Power Revolution.

“It will institutionalize impunity and unequal application of the law as he himself files a claim for his father’s plundered wealth and continues to resist paying taxes long overdue. And to allow him to reclaim power debases the memory of all who have suffered and died under his family’s rule,” they said.

“For us, alumni and students of UP Law, our conscience and convictions tell us to vote for Leni Robredo, the person who has demonstrated ‘Honor and Excellence,’ and who possesses unquestioned integrity, competence, patriotism and a vision to uplift all Filipinos, especially those who have been left behind in the margins of society,” they said.

On March 22, over 1,000 alumni and students of the Ateneo Law School also issued a statement endorsing the tandem.

The group noted that for the last 80 years, the Ateneo Law School “has always been a bastion in upholding the rule of law and in striving to seek truth and justice.” They added that “during the Marcos dictatorship, among the most prominent champions of human rights who spoke up against the atrocities committed by the Marcos administration were alumni of this very institution, the Ateneo Law School” like slain Antique governor Evelio Javier and the late Bobby Gana.