In the February 24-March 1 nationwide poll:

"Administration standard-bearer Manuel Roxas II came in close second at 22% while Senator Miriam Defensor Santiago trailed behind with only 2%," the report continued.

Citing the slight movements in Poe's and Duterte's numbers, as well as the steady "vote support" of Binay and Roxas, The Standard resident pollster Junie Laylo noted, "The presidential race has become tighter."

"The race is expected to be very fluid given the upcoming debates and increased sorties of candidates," Laylo said. The next presidential debate will be on March 20.

The survey had 3,000 respondents from 79 provinces and the 17 cities in Metro Manila. All of them are registered voters with biometrics and who said they are sure to vote on May 9. The margin of error was higher for the Metro Manila results, at +/- 6%; while major geographic areas had a margin error of +/-4%.

Poe and Binay were tied in the National Capital Region, North/Central Luzon, and South Luzon/Bicol.

Roxas was ahead in the Visayas, except in Eastern Visayas, where Binay was the top choice. This is the region worst hit by Super Typhoon Yolanda (Haiyan) in 2013 and where Roxas is still heavily criticized for the slow response and relief during the disaster. 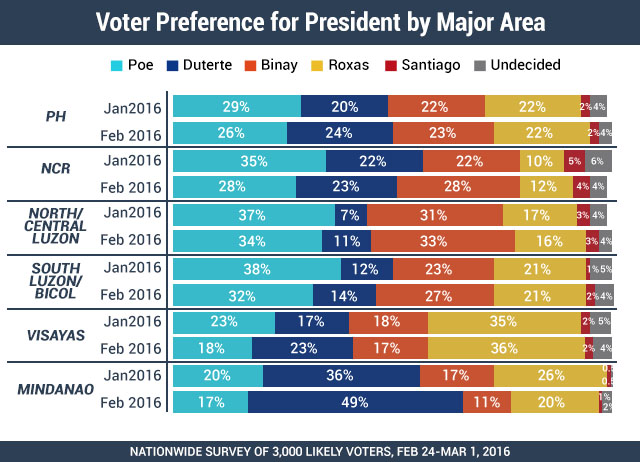 Poe remained ahead in urban areas, although she dropped to 27%, from 35%, here. Duterte was the top choice (25%) in rural areas.

Duterte overtook Poe as the top choice of Class ABC. The PDP-Laban standard-bearer's numbers rose to 30%, from 27% in the last Laylo survey, while Poe's figures dropped to 21%, from 30%. 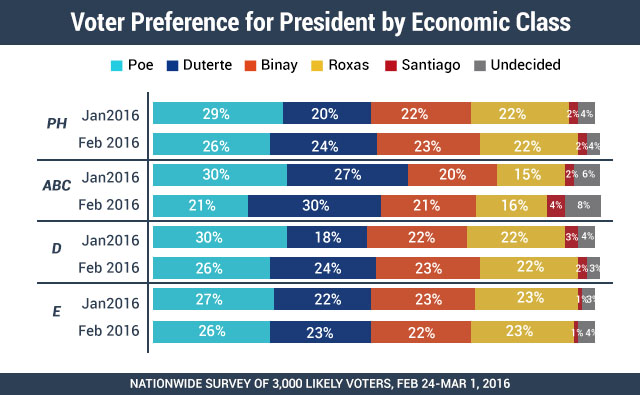 The Duterte team said they were "happy" with the survey results, saying these "mirror what we are seeing and are happening on the ground."

Peter Laviña, spokesman of the Duterte campaign, said in a statement Monday, March 7: "Our presidential candidate Rody Duterte gained 4 percentage points, noticeably the highest increase among the presidential bets. This is reflective of what we are seeing on the ground, where his sorties consistently draw unprecedented crowds attracted not by free rides, free food or the presence of showbiz personalities or entertainers."

In a statement, Poe's spokesman Valenzuela City Mayor Rex Gatchalian also said the senator is "thankful to the Filipino voting public who continue to stand by her candidacy despite the waves of low-handed attacks thrown her way these past couple of weeks."

The survey was taken over a week after the Supreme Court (SC) wrapped up oral arguments on Poe's petition against the Commission on Elections (Comelec), which earlier ruled to bar her candidacy over citizenship and residency issues.

The Comelec has since decided to include Poe's name on the ballot, whatever the outcome of the petition before the SC.

"The latest Laylo survey proves what we've always said: it's a tight race," Gutierrez said in a statement. "We're pleased with the steady rise of our candidates. The important thing is to be number 1 on May 9, and we're confident that Mar and Leni [Robredo] would be number 1 then."

Monitor how the presidential candidates have been performing in the surveys over the past months through Rappler's interactive poll monitor. – Rappler.com