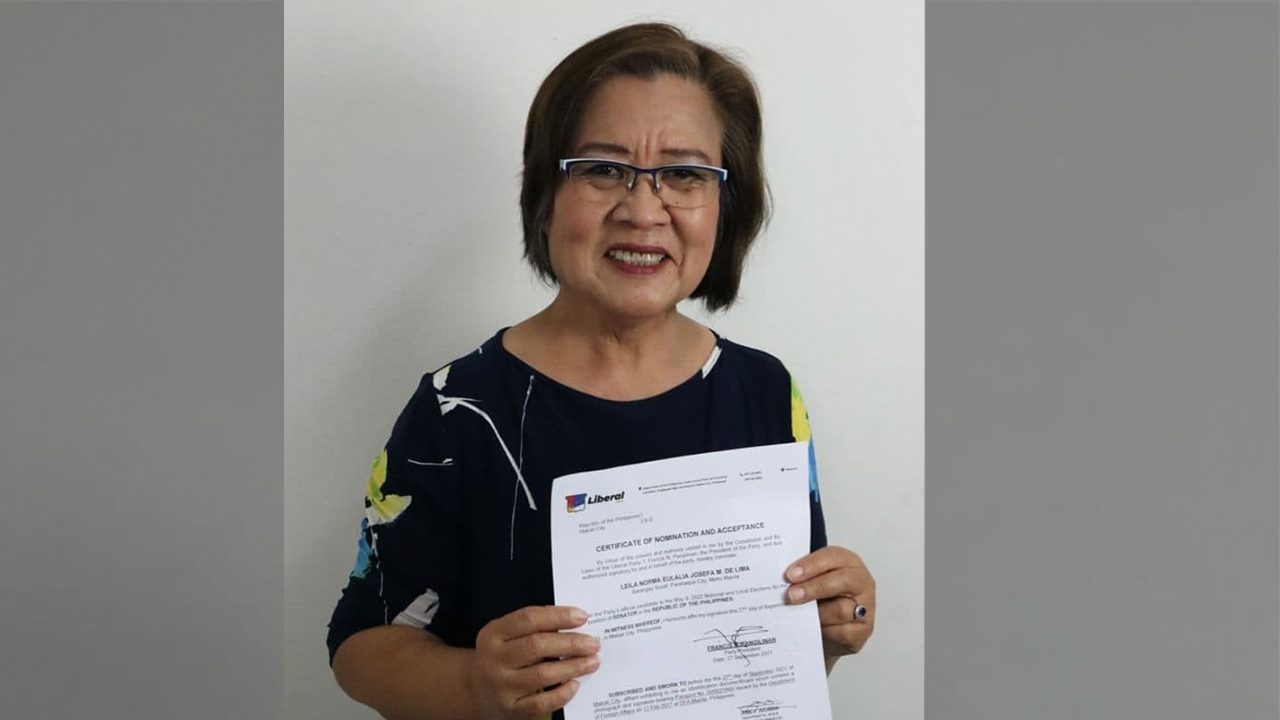 Facebook Twitter Copy URL
Copied
Senator Leila de Lima, who has spent over four years of her term in a Camp Crame cell, seeks a fresh term at the Senate

Reelectionist senator Leila de Lima will have to pull a rare feat of campaigning from jail and seek a second six-year term at the Philippine Senate, nearly five years since her arrest over what she and her supporters called “trumped-up” drug charges.

De Lima, through her representative, filed her Certificate of Candidacy (COC) for the Senate on the last day of filing on Friday, October 8.

“I will not let prison and persecution stand in the way of the fight against Duterte’s evil regime,” the senator earlier said upon accepting the nomination of the Liberal Party (LP) as one of its senatorial candidates.

(Sending me to jail only strengthened my resolve. I was even more motivated to work harder to bring back the justice you have trampled on. Everything I have fought for would go to waste if I would turn my back on the call to run again.)

It woud not be the first time for someone to seek a Senate seat from a jail cell. Antonio Trillanes IV ran and won in the Senate race in 2007 while he was imprisoned for rebellion and coup d’etat charges. Then-president Benigno Aquino III granted him amnesty in 2010, but President Rodrigo Duterte revived the cases in an unsuccessful attempt to jail his fierce critic.

De Lima continues to fight two remaining charges of conspiracy to commit drug trading, having been acquitted of the first of the three charges in February.

Local courts in Muntinlupa are handling her cases, and she needs judges’ permission every time she has to participate in an event outside prison.

Since her arrest and detention in February 2017, her staff – from a list pre-approved by the Philippine National Police (PNP) Custodial Center – goes to Camp Crame to give her updates on legislative work or the news through clippings.

It’s through her staff that she is able to release her dispatches, some translated in tweets later by her staff, as she continues to be a staunch critic of Duterte.

De Lima was the chief of the Commission on Human Rights who had investigated then-mayor Duterte over the alleged Davao Death Squad (DDS). Just months in the Senate, and the Duterte presidency, De Lima stepped on the gas and convened Senate hearings into the drug war killings as chair of the Senate justice and human rights committee.

A day after she presented Edgar Matobato, a self-confessed hitman of the Davao Death Squad who had accused then-mayor Duterte of ordering killings, she was ousted as the panel chair by a vote of 16-4 – only Liberal Party members and Senator Risa Hontiveros stood by her.

Days before Lima began her drug war killings probe in the Senate, Duterte stepped up his attacks against the senator centered on her personal life and allegations that she was linked to the drug trade. Duterte was also particularly angered by De Lima’s previous bid to connect him with the Davao Death Squad.

The House dominated by Duterte’s allies probed De Lima’s alleged complicity in prison drug trade when she was justice secretary, the basis of a drug complaint filed by the Volunteers Against Crime and Corruption (VACC) – also allied with Duterte – that later sent De Lima to jail.

De Lima’s incerceration is among the inspiration for the global Magnitsky Act, which empowers foreign countries to impose sanctions on human rights violators. A committee of the US Senate, for example, passed a resolution that seeks to impose a travel ban on De Lima’s accusers.

De Lima’s remaining two charges have largely to do with testimonies of two National Bureau of Investigation (NBI) agents – one of them Rafael Ragos, previously a co-accused in the case, but who was dropped by the Department of Justice (DOJ) to use as a witness against the senator.

While in detention, De Lima has received a number of prestigious recognitions, including the 2018 Prize for Freedom award by Liberal International, the 2016 and 2017 Global Thinker Award by Foreign Policy, one of the Top Most Influential People for 2017 by Time magazine, one of the notable Women Human Rights Defenders for 2017 by Amnesty International, and 39th World’s Greatest Leader by Fortune magazine, among others. – Rappler.com