Robredo is number one victim of red-tagging, says ex-AFP spokesperson MANILA, Philippines – Presidential candidate Vice President Leni Robredo is the number one victim of red-tagging, according to a former spokesperson of the Armed Forces of the Philippines (AFP).

“Yes, Vice President Leni Robredo is the number one victim of this ‘red-tagging’ being undertaken by members, some in the government,” former AFP spokesperson retired Major General Domingo Tutaan Jr. said during a Rappler Talk interview on April 7.

According to the retired general, the attacks on Robredo started when the opposition leader began to gain massive support. Robredo is facing nine other presidential candidates, including dictator’s son Ferdinand “Bongbong” Marcos Jr. 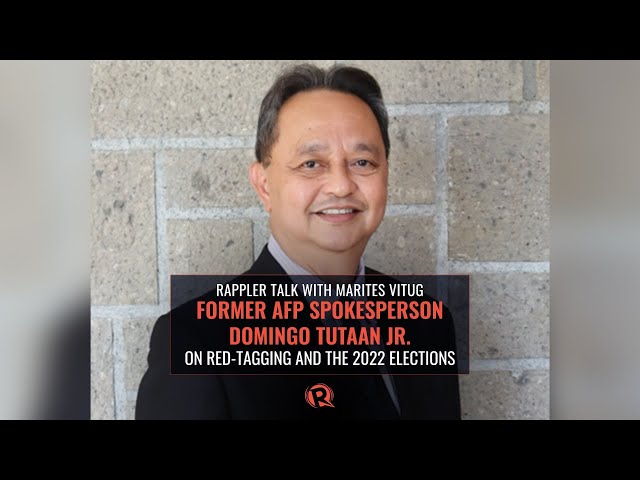 (When VP Leni started her candidacy, when she announced, she’s like a fruit of a tree in the lower part, just below the tree. Just the small branches of the tree. Those are usually being ignored.)

Tutaan added: “But when VP Leni started to gain popularity. When there were a lot of supporters being convinced of her being the next president. When they saw that there’s a program of government, a clear cut of government that is in store if she ever becomes the president. Nasa taas na siya ng puno eh, ‘yong bunga (She’s already on the top of the tree). They started, binabato na ‘yan eh (that’s now being targeted).”

Tutaan also noted that red-tagging started with Badoy, in fulfilling her roles in the NTF-ELCAC.

“I think this red-tagging started with Undersecretary Lorraine Badoy. She started this as a spokesperson of the NTF-ELCAC on special concerns,” the retired military general said.

The former AFP spokesperson added that Badoy red-tags those who criticize the government. For red-tagging Robredo, Badoy now faces various complaints filed before the Office of the Ombudsman. Some 26 activists filed three separate complaints against Badoy on March 23.

A week later, progressive groups filed a different complaint against the NTF-ELCAC spokesperson for the same reasons. – Rappler.com