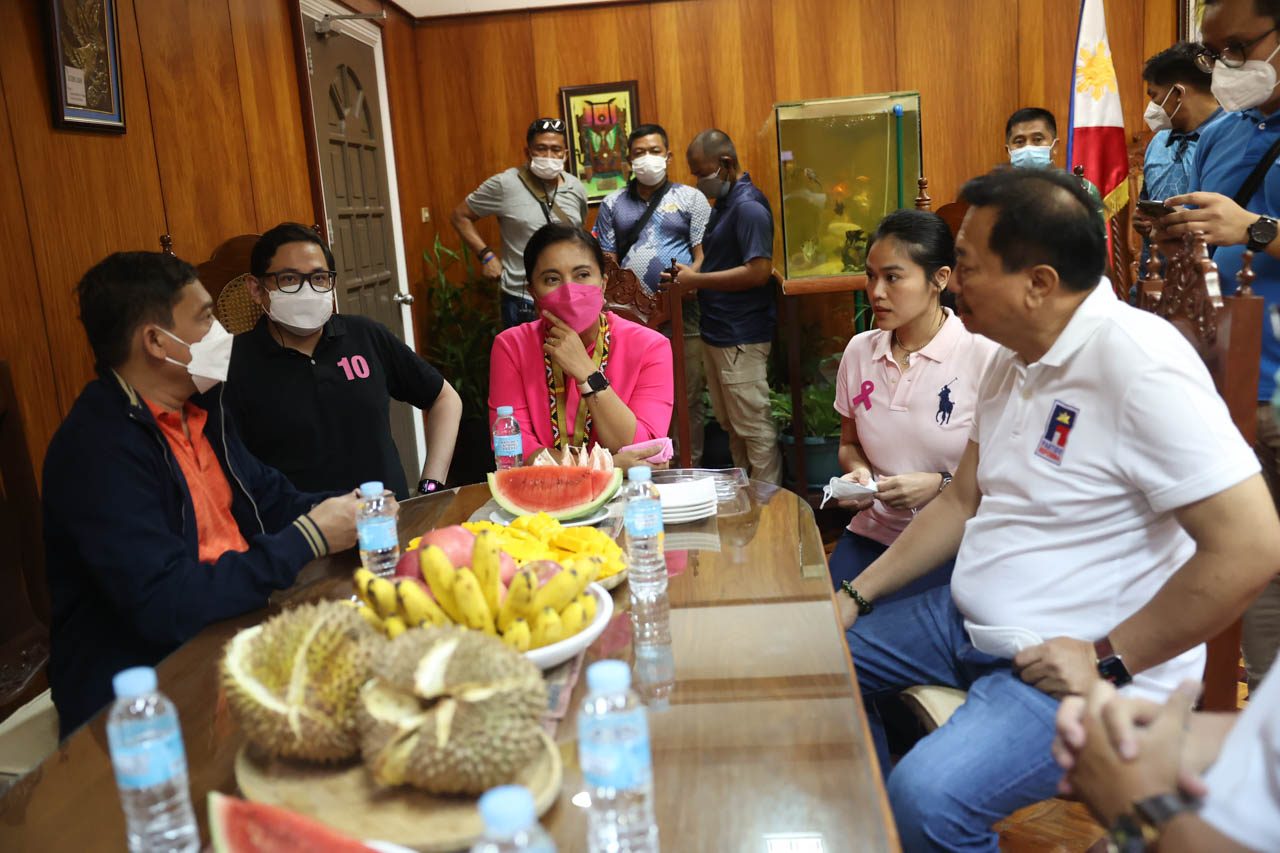 Vice President Leni Robredo on Thursday, March 24, arrived at the Davao del Norte Provincial Capitol in Tagum City with Davao del Norte 1st District Rep. Pantaleon Alvarez and was welcomed by Davao del Norte Governor Edwin Jubahib and hundreds of their employees. Robredo had a private meeting with the province’s officials, who endorsed her presidential bid.

DAVAO CITY, Philippines – When former House speaker Pantaleon Alvarez of Davao del Norte declared his support for Vice President Leni Robredo’s presidential bid, she admitted many of her allies were skeptical given his history of being a once-loyal lieutenant to President Rodrigo Duterte.

But Robredo – the Philippine opposition leader now gunning for the presidency in May – gave assurances that her alliance with Alvarez, Davao del Norte Governor Edwin Jubahib, and their Partido Reporma are “not transactional at all.”

Speaking to Rappler CEO and Nobel Peace Prize winner Maria Ressa in a taped interview on March 26, Robredo said Alvarez and Jubahib did not ask anything in return for the political machinery they would be mobilizing for her in the Davao region, Duterte’s bailiwick.

Ressa’s interviews with Robredo and other presidential candidates are set to be released in full in the third week of April.

“I would have to assure everyone that there is no arrangement at all, that it was not transactional at all. In fairness to not just to the former speaker, but also the governor, wala talagang hiningi na kahit ano (they did not ask for anything in exchange),” Robredo said. 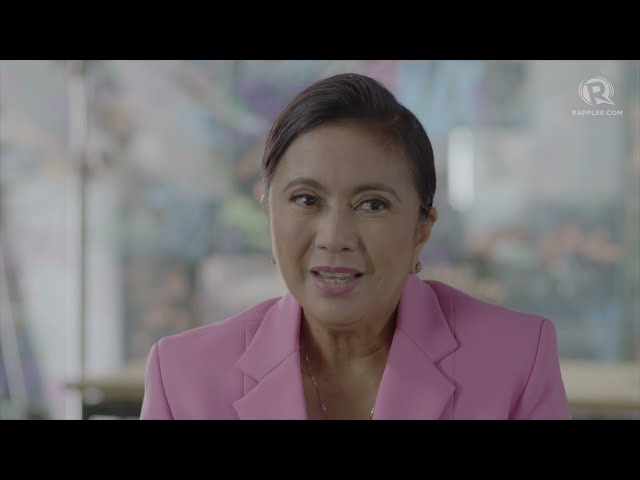 Robredo entered Duterte country for the first time on the campaign trail on March 24. She was just supposed to spend half a day there, with her events culminating with a rally at Digos City in Davao del Sur.

She was not expecting Alvarez would drop presidential candidate Senator Panfilo Lacson and endorse her instead. The alliance was sealed only in the evening of March 23, but talks between Robredo and Alvarez, as well as their emissaries, had been happening for weeks.

Robredo said she and Alvarez had a chance to sit down together a few weeks prior his bombshell announcement. But shifting allegiance to her was not yet on the table then, let alone what Alvarez could possibly get in return for campaigning for her.

So when she was told that Alvarez was ready to endorse her on March 24, Robredo was surprised.

(I was really surprised. I kept on asking them, ‘Are you sure?’ So we didn’t have discussions like that. I mean, there were no talks that this is what they wanted from us or this is the position they would ask for. There was none of that.)

Alvarez endorsed Robredo following weeks of her rallies being attended by tens of thousands of supporters. The biggest one yet was staged only four days ago in Pasig City, a show of force with over 130,000 “Kakampink” supporters in attendance.

Though Robredo may still be a far second placer to the frontrunner, the late dictator’s son Ferdinand Marcos Jr., Alvarez believes she is already gaining ground. In contrast, Alvarez’s Partido Reporma dropped Lacson because he remains a survey laggard.

Alvarez is set to host a grand rally for Robredo right at the provincial capital Tagum, in his bailiwick Davao del Norte on Thursday, April 7. It is expected to be a show of force for Robredo right in the heartland of Duterte country, with attendees expected to be much bigger than the 6,000 “Kakampinks” who attended Robredo’s earlier rally in Digos City, Davao del Sur in .

Six years ago, a political pact between Robredo and Alvarez would have been unthinkable. As former House speaker, Alvarez had once called Robredo “shameless” for criticizing Duterte’s bloody drug war. He even thought of impeaching her as Vice President but he didn’t pursue this.

But things changed when Alvarez was ousted as speaker in 2018, with Duterte’s own daughter, Davao City Mayor Sara Duterte, the key figures behind it. She is now running for vice president in tandem with the late dictator’s son Ferdinand Marcos Jr., Robredo’s rival.

For Robredo and Alvarez, their common goal is to prevent the kind of politics represented by the Marcos Jr.-Duterte tandem. Their complicated political past is now water under the bridge.

If anything, Robredo values what Alvarez and Jubahib can do for her in terms of helping increase her numbers in Duterte heartland Davao. He said some 370 Partido Reporma candidates and some independent bets across 28 provinces are now backing Robredo along with the LPGMA and Ako’y Pilipino party-list groups.

Alvarez to Kakampinks: Want her to win? Forge alliances with barangay captains “So sobrang vina-value ko…’yung help knowing that you know, if you look at the surveys, ‘yung Davao region is where I am faring the worst. Hindi ako doon nagdo-double digits. Talagang single digits lang ako doon. So to get the support of local officials of that stature in the region…ang laking tulong niya sa kampanya,” said Robredo.

(I truly value the help, knowing that, if you look at the surveys, Davao region is where I am faring the worst. I don’t even reach double digits there. I’m just in the single digits. So to get the support of the local officials of that stature in the region, that’s a big help to my campaign.)

Protection from Sara Duterte? ‘I don’t need it,’ says Alvarez

Alvarez would later confirm in a separate Rappler Talk interview that he did not ask for any favors from Robredo.

“Wala, wala, wala. Gusto ko lang talaga tumulong din (There’s none. I really just wanted to help),” said Alvarez, reiterating that his push for a Robredo presidency now is a continuation of the days he resisted the Martial Law years under Ferdinand Marcos. It’s quite the contradiction, as he did back giving a hero’s burial to the dictator when Duterte allowed it to happen. 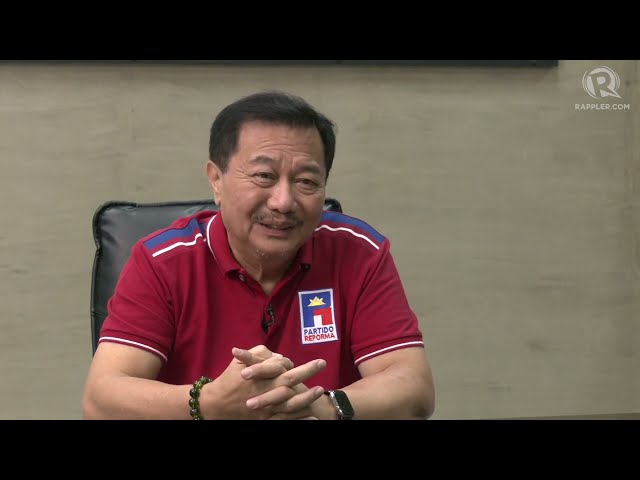 Some political pundits, however, believe Alvarez’s support for Robredo is meant to be an unspoken political safety net for him in case Duterte wins as vice president. The Davao City mayor still dominates major pre-election surveys.

But Alvarez said he does not need any protection from the vice president candidate.

(It’s not about protection, okay? Because in the first place, I don’t need it, this protection, because we were able to survive for several years now even if her father is the president, right?)

The controversial House coup that Sara Duterte helped plot eventually turned Alvarez into an opposition figure against the President. After licking his wounds, Alvarez came back with a vengeance, as he and his allies defeated the Dutertes’ candidates in Davao del Norte in the 2019 polls.

Alvarez said he really could not do much should Sara Duterte continue to target him in the future, but he isn’t at all concerned.

“I think we will survive,” he said. – Rappler.com