LABOR LEADER. Partido Lakas ng Masa presidential bet Leody de Guzman joined the workers of ES Transport at the Land Transportation Franchise and Regulatory Board along East Avenue to denounce the alleged conspiracy between the agency and the bus company's management on February 7, 2021.

MANILA, Philippines – In battling bigger political names for the country’s top post, labor leader and aspiring president Leody de Guzman chose to officially launch his campaign in a historic site dedicated to the heroes and martyrs of Martial Law.

De Guzman and running mate Walden Bello handpicked the Bantayog ng mga Bayani in Quezon City on Tuesday, February 8, for their proclamation rally. The site was built in honor of individuals who “lived and died in defiance” against the tyrannical rule of late dictator Ferdinand Marcos during the Martial Law years.

The tandem, who are running under the Partido Lakas ng Masa, will also bring their Senate slate in their launch, namely Luke Espiritu, Roy Cabonegro, and David D’Angelo. Supporters of de Guzman will also hold a caravan from his residence in Cainta, Rizal, to ABS-CBN compound in Quezon City. Afterwards, the supporters, consisting of labor unions, urban poor, and other mass organizations will march to the Bantayog.

The venue of De Guzman and Bello’s campaign launch is not coincidental. The tandem has a clear anti-Marcos stance.

After they announced their team in October 2021, De Guzman and Bello said they are running to fight their so-called “Marcos-Duterte Axis of Evil.” Bello, in one instance, even blasted the dictator’s son, presidential aspirant Ferdinand “Bongbong” Marcos Jr., with the f-word.

In a message to Rappler, De Guzman’s campaign team said they also chose the venue for accessibility. 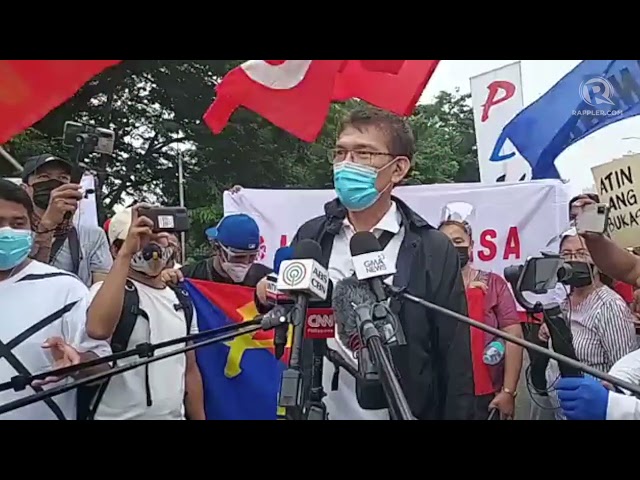 “Our primary consideration for the venue was the accessibility of those who wish to attend the proclamation rally of Ka Leody and Prof. Walden. We want people from all walks of life to witness this historic moment in our country’s history,” the campaign team said.

For the 2022 elections, the tandem will rely on the votes from workers and laborers, and other marginalized groups. The 2022 presidential election will also mark the first time that De Guzman will vie for the presidency.

In the 2019 midterm elections, De Guzman only ranked 38th in the Senate’s battle for magic 12. – Rappler.com