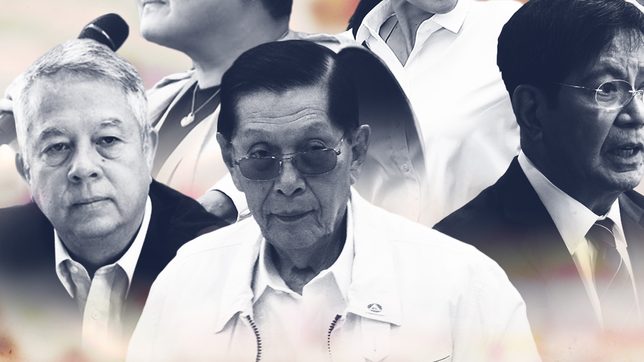 Vice President and opposition leader Leni Robredo filed her certificate of candidacy (COC) on Thursday, October 7, hours after she formally announced her decision to run for the presidency.

Robredo was expected to run under the Liberal Party, where she remains the chairperson. She, however, decided to run as an independent candidate to signify that she has not abandoned her mission to unite the opposition in 2022. (WATCH: Yellow out, pink is in: Robredo runs for president as an independent)

She, however, is not the first presidential aspirant to make a bid as an independent. There have been five before her post-EDSA Revolution – from 1992, the first general elections under the 1987 Constitution, until 2016.

While Poe ran as an independent candidate in the 2016 presidential election, she was endorsed by several political groups and party-list organizations. These included Aksyon Demokratiko, Nationalist People’s Coalition, Magdalo, the Makabayan coalition, and the Bakud party, an ally of the Liberal Party in Cebu.

Former president Joseph Estrada also backed Poe’s campaign and said that she had the intelligence and integrity needed for a president. Estrada was known to be the best friend of Poe’s late father, the actor and himself a former presidential candidate Fernando Poe Jr.

Poe finished third among five candidates in the presidential race.

Madrigal ran for president in 2010 after a single term in the Senate. She claimed she had no campaign donors, according to a Philippine Center for Investigative Journalism report in 2010.

The report said Madrigal spent P55.2 million of her own money for her campaign, making her the second-highest individual donor to a candidate, following former Senate president Manny Villar, who also ran for president in 2010.

Madrigal finished eighth among nine candidates, with only 0.13% of the votes.

Perlas, an environmentalist and activist, was awarded the Right Livelihood Award in 2003.

According to the same PCIJ report, Perlas received donations worth P2.2 million during his campaign. He lost the elections and placed seventh, receiving 0.15% of the total votes.

Lacson initially campaigned under the Laban ng Demokratikong Pilipino banner in 2004, but an internal feud with its members caused him to resign from the party before the elections.

He continued to campaign as an independent candidate and eventually placed third among five bets.

In a Rappler Talk interview in August 2021, Lacson said that running as an independent candidate in 2004 made him a lone wolf. “Ulila ako noon,” he said. (I was alone then.)

Lacson is gunning again for the presidency in 2022. He filed his COC on Wednesday, October 6. He recently became ​​the chairman of the Reporma party in July and is now the standard-bearer of the revived party.

Enrile was the country’s first independent presidential candidate under the 1987 Constitution.

He finished eighth among 10 candidates in the 1998 presidential election, garnering only 1.28% of the votes, according to the revised and expanded Philippine Electoral Almanac released by the Presidential Communications Development and Strategic Planning Office. It was Enrile’s only presidential bid so far, but he has remained in politics throughout the years. He is currently affiliated with the United Nationalist Alliance since 2012. Prior to this, he was with the Nacionalista Party and Pwersa ng Masang Pilipino, among others.