Manay Gina was the key: De Venecias of Pangasinan come out for Leni Robredo MANILA, Philippines – Presidential candidate Vice President Leni Robredo clinched the support of the influential De Venecia clan of Pangasinan, a crucial alliance in a province part of the so-called “Solid North” where votes are traditionally commanded by the Marcoses. 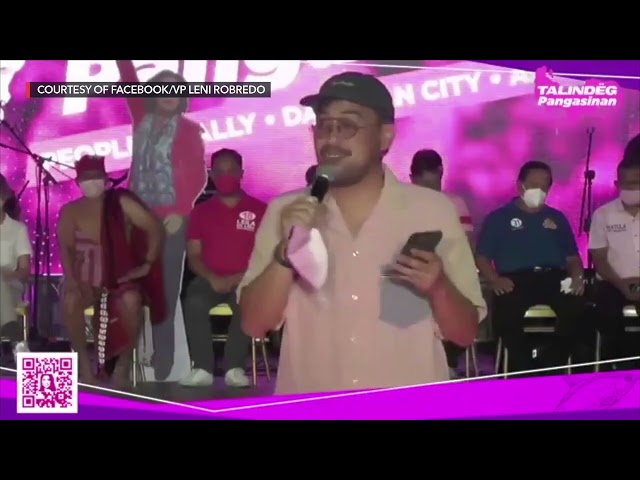 The De Venecia matriarch apparently has been a longtime mentor figure for Robredo from their days in the 16th Congress from 2013 to 2016.

At the time, Robredo was a neophyte lawmaker representing the 3rd District of Camarines Sur, while Manay Gina was already serving her second term as Pangasinan 4th District representative. By then, Jose de Venecia had already served as House speaker twice, from 1992 to 1998, and from 2001 to 2008.

(It was really Manay and VP who talked. It was VP who really clinched their support. They’ve been close from their Congress days.)

Another campaign source even described Manay Gina as one of Robredo’s BFFs in Congress.

Rappler sources said Robredo had secured Manay Gina’s support as early as December 2021, but it took months before her husband and son got on board.

(That’s how it is. They came out now because it’s the perfect time, but they’ve been helping for awhile now. Manay is the boss here.)

The De Venecias’ endorsement is a much-needed boost for Robredo in the country’s third most most vote-rich province, where over 2.09 million votes are up for grabs in the May elections.

In the 2016 vice presidential race, she lost by a huge margin to the late dictator’s son Ferdinand Marcos Jr. in Pangasinan, who got 832,711 votes against Robredo’s 265,016 votes.

Marcos Jr. continues to dominate the 2022 presidential race, based on pre-election surveys. But the latest poll by Pulse Asia Research, Incorporated showed Robredo slowly inching towards Marcos’ 56%, surging by nine points in end-March to 24%.

Months ago, it seemed unlikely that the De Venecias would go all out for Robredo this way, given the clan’s deep ties with the Lakas-Christian Muslim Democrats (Lakas-CMD), the party long associated with former president Gloria Macapagal-Arroyo.

Lakas-CMD, now being chaired by vice presidential bet and Davao City Mayor Sara Duterte, has adopted Marcos as its standard-bearer in the May polls. Arroyo was the political tactician who brokered Marcos-Duterte alliance in 2022.

The patriarch Jose de Venecia, one of the party’s co-founders, is the chairman emeritus of the Lakas-CMD, where Arroyo is party president emeritus. Arroyo was De Venecia’s running mate during his failed presidential bid in 1998.

The De Venecia clan scion Toff, a child actor before joining politics, is the provincial and regional chair of Lakas-CMD. But Toff was formerly member of the once-ruling Liberal Party (LP), which Robredo chairs.

It was LP that had carried Toff during his first successful bid for a congressional seat in 2016. He is known to be close among LP stalwarts in the 17th and 18th congresses.

Two Rappler sources in the Robredo camp said the De Venecias supposedly gave the Lakas-CMD leadership a heads up prior to their endorsement of Robredo. Rappler has already reached out twice to House Majority Leader Martin Romualdez to confirm this, but the Lakas-CMD president has not responded as of posting. We will update this story when he replies.

It was Toff who first went up on stage in Dagupan to endorse Robredo, his pink face mask matching his pink button-down polo.

He admitted he had been afraid to speak out in support of the lone female presidential bet, knowing he would be defying the decision of his own party to adopt Marcos Jr. as their standard-bearer.

But Toff, a known champion for the Philippine creative industry in Congress, recalled the iconic lyrics of the song “Bawat Daan” penned by singer-songwriter Ebe Dancel, who is also a Robredo supporter.

(VP Leni, I have to admit, up until the end, just before I went up here onstage, I was filled with fear and worry. But as the song of our friend Ebe Dancel goes, VP Leni’s hands guides on the path we must take.)

(She is the one sure thing in a thousand doubts. And I am happy that, finally, we finally found VP Leni. VP Leni, we can see here tonight the sea of pink in front of you today. The sea of pink that draws its strength from Urduja, and from every Pangasinense.)

At the end of De Venecia’s speech, he called on his parents to join him onstage, both wearing pink, as Pangasinenses cheered them on for endorsing Robredo.

In her speech before the sea of pink in Pangasinan, Robredo thanked her newfound allies for taking a chance on her right in the known Marcos territory.