Facebook Twitter Copy URL
Copied
'Let us show our acknowledgement and affirmation of Leni,' Mar Roxas says at a campaign rally for local candidates in his hometown, dispelling rumors that he supported another presidential bet

MANILA, Philippines – Former interior and local government chief Mar Roxas has made a rare public appearance to support the presidential bid of his former running mate, Vice President Leni Robredo, putting to rest rumors that he was backing someone else.

Speaking in Hiligaynon in his home turf Roxas City, Capiz, at the start of the campaign period for local bets on Friday, March 25, Roxas heaped praises on Robredo and urged his kasimanwas to support her as much as they did in 2016.

“I am appealing to all of you that in the upcoming elections, let us show our acknowledgement and affirmation of Leni, her capacities, her love for us, and for her being true to our electoral bids,” Roxas said.

“Let us support her, raise her up, choose her, and give our full support to Leni Robredo,” he added.

The former senator recalled how the Ro-Ro tandem – short for Roxas and Robredo – won big in their respective bailiwicks in 2016: Capiz, Roxas’ home province, and Bicol region, known as Robredo country.

Robredo had been a reluctant vice-presidential bet, stepping up for her Liberal Party ally Roxas when no other candidate was willing to become his running mate.

She was just a neophyte politician then, fresh from her first term as Camarines Sur 3rd District congresswoman. Robredo was thrust into the political spotlight following the tragic plane crash that took the life of her husband, longtime Naga City mayor and former interior secretry Jesse Robredo.

But she brings to the table her vast experiences working with communities as a development worker and alternative lawyer, among the reasons that made her an ideal running mate for Roxas.

“I will never forget what you have done for me…. It was clear to me that the person who had my full trust because she had all the qualifications, not just intellectual qualifications, but also qualifications of the heart, was no other than Leni Robredo,” Roxas said. 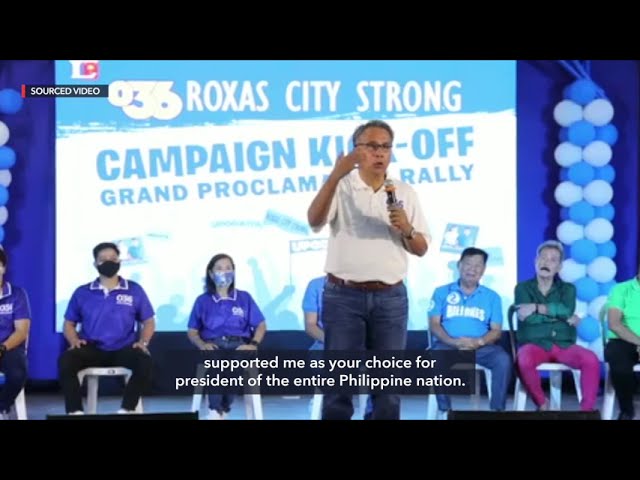 Robredo would later stage a come-from-behind victory in the 2016 vice-presidential contest, while Roxas had to bow down to the winner of the presidential race, then-Davao City mayor Rodrigo Duterte.

Roxas attempted a Senate comeback in 2019, but fell just outside the “Magic 12.” He has since retreated from public life, occasionally sharing his two cents on pressing issues via his social media accounts every now and then.

When Robredo was still deciding if she should mount her presidential bid in mid-2021, rumors were running wild in political circles that Roxas has already placed his bets on another candidate.

Roxas stayed relatively silent in the months after Robredo finally announced her candidacy, though he did affix his signature in a manifesto of support for Robredo’s presidential bid, along with several Cabinet members and government officials who served under the late president Benigno Aquino III. – Rappler.com