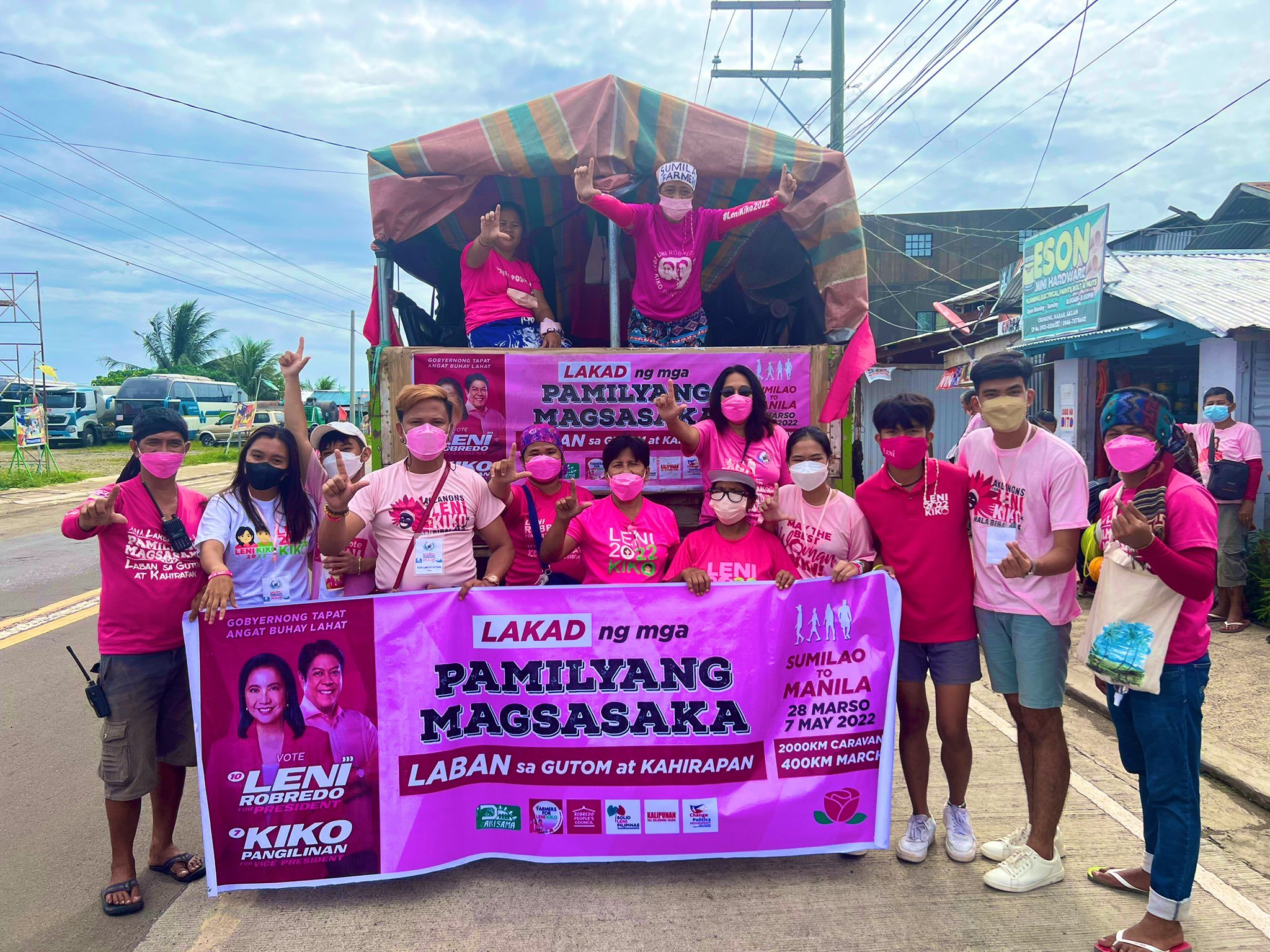 ILOILO City, Philippines – Farmers and fisherfolk who joined the 2,000-kilometer march for the Robredo-Pangilinan tandem touched base with supporters and fellow agriculture sector workers in key Western Visayas areas from Thursday, April 7, to Saturday, April 9.

Farmers from Sumilao, Bukidnon, and members of the Pambansang Kilusan ng mga Samahang Magsasaka (Pakisama) stopped at the cities of Bacolod and Iloilo, as well as southern Iloilo, Aklan, and Antique.

Sumilao farmer-leader and Pakisama chairperson Noland Peñas said they dropped by Negros Occidental to highlight the huge backlog there of the agrarian reform program.

Many beneficiaries already have certificates of land ownership award (CLOAs), but have yet to be installed in their lands, he pointed out.

“We want to inspire them, and share our experiences, being Sumilao farmers who now own our land,” Peñas said, referring to continuing landlord resistance to agrarian reform.

During their visit to Negros Occidental, the farmers also met with bishops Gerardo Alminaza and Patricio Buzon of the San Carlos and Bacolod Dioceses, who encouraged them to continue networking with farmers in other provinces as a way of consolidating their ranks.

The farmers said they hope their house-to-house campaigns and recollections of first-hand experience working with Robredo woud help dispel the “elitist fiction” spread by the camp of her rival, Ferdinand Marcos Jr.

In Iloilo, they met with members of the local chapters of the Robredo People’s Council and Laywers for Leni and other Robredo-Pangilinan supporters at a “mini-stop” in neighboring Oton town.

In Barangay Nanga, Guimbal town, they met with fisherfolk.

Peñas shared how they formed the Panaw Sumilao Multipurpose Cooperative after successfully claiming their ancestral lands. In this fight, Robredo was one of their legal counsels.

Salvacion Garote, who has been selling fish for 35 years, told Rappler about the difficulties of getting proper representation.

“We have been complaining, but if no one stands up for us at the top, our concerns won’t be heard. It would still be useless. We need a representative who can carry our concerns,” said Garote.

“There are many of us on the coast but most of us are poor. Our greatest concern is the support from the government for equipment in fishing. We need pump boats, nets, nylon, and everything else needed. If we don’t have a good leader here, it would still be useless,” she added.

The farmers had to cancel their house-to-house campaign in Miagao due to rains and scheduling concerns but still met with fellow Robredo volunteers to share experiences.

Rene Cerilla, a paralegal for farmers and fishers at the Sentro ng Alternatibong Lingap Panlegal (SALIGAN), recalled how Robredo and her fellow lawyers did fieldwork to provide legal training to their sector.

“Leni [Robredo] and others trained farmers, usually holding seminars in barangay halls and smaller beaches instead of hotels, to be closer to farmers for the implementation of Republic Act No. 6657 or the Comprehensive Agrarian Reform Law, “ Cerilla recalled of the experience just after law was signed in June 1988.

Cerilla told Rappler that he had worked with Robredo a lot during her Saligan days – he was a paralegal while Robredo was lawyer focusing on women and children.

He said Robredo could be key to minimizing hunger in the country.

“I think if she wins, the country will prosper because we studied the Zero Hunger program of Brazil. We coincidentally went together while I was Pakisama president, and she knows it well. If she becomes president, I think she can do that for the country,” he said.

Their march, said Cerilla, was not payment for debt of gratitude to Robredo, but an exercise in showing fellow agriculture sector workers that she can be the president who can address their needs.

He also vouched for Pangilinan, recalling how he welcomed them in Samar when they marched to advocate for a law on the coconut levy fund which is now Act No. 11524 or the Coconut Farmers and Industry Trust Fund Act. – Rappler.com