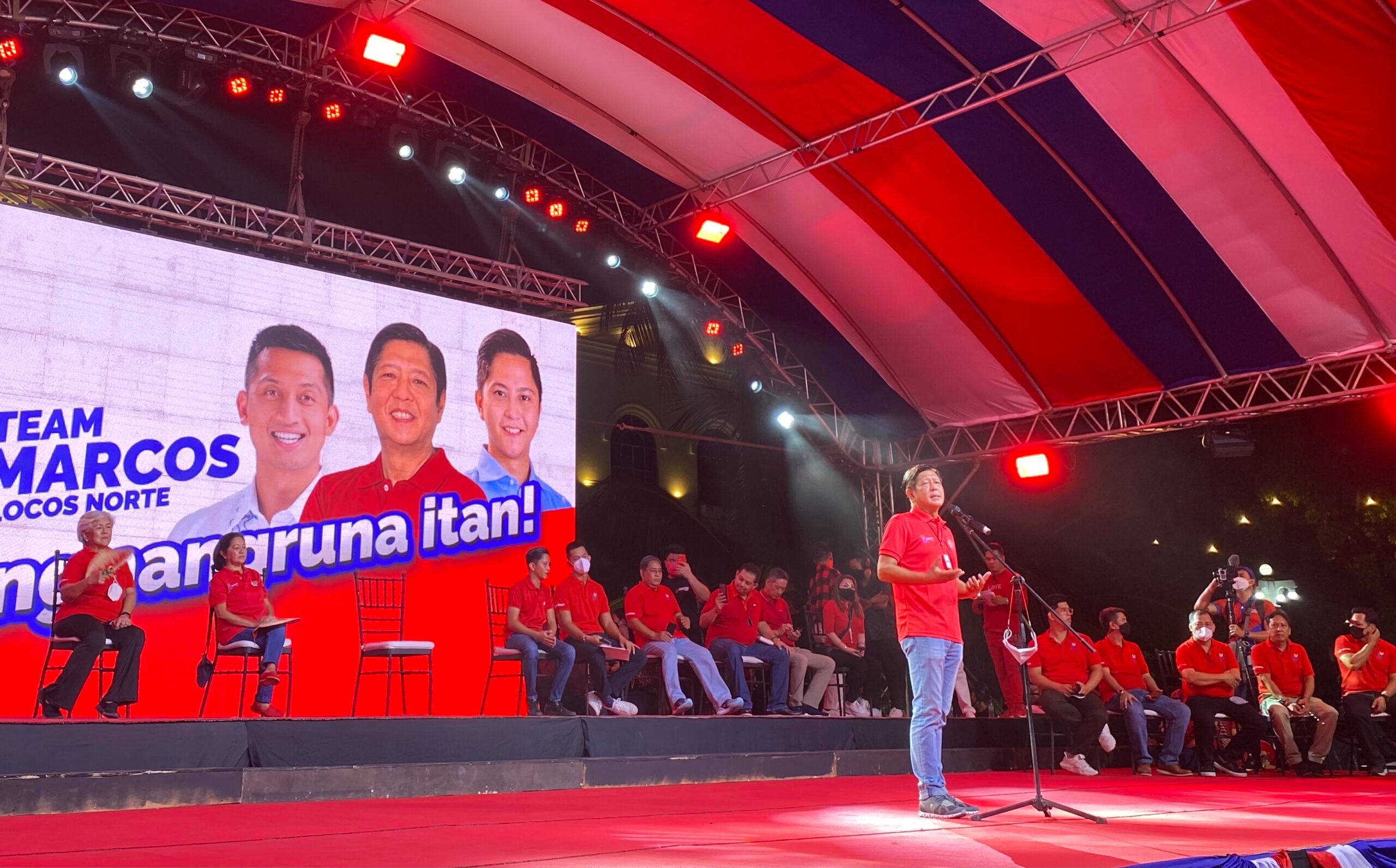 Facebook Twitter Copy URL
Copied
Voters' sentiments are split in the local scene between the young Marcoses, and the veteran Fariñases. Once again, Ilocos Norte folks have no choice.

ILOCOS NORTE, Philippines – Renato Navarro, who owns a pasalubong store in Laoag City, was raring to go to the Capitol grounds on Friday, March 25, to see his presidential bet – the dictator’s heir Ferdinand “Bongbong” Marcos Jr. But when you ask him if he would vote for Marcos Jr.’s son, nephew, and his anointed mayoralty bet in Laoag – he was not as decided.

Asked for his candidates for governor, Laoag City mayor, and congressman, Navarro told Rappler in Ilocano: “I haven’t decided yet. I’m still thinking.”

Such is the local scene in Ilocos Norte. Although Marcos Jr. is naturally the most popular presidential choice, folks here are split between the third generation spawns of the late dictator and the other dynasty they are very familiar with – the Fariñases led by former governor and former House majority leader Rodolfo “Rudy” Fariñas.

On the day Senator Bong Go backed out of the presidential race, Sandro was asked if Team Marcos was open to a reconciliation with Team Fariñas. Sandro said in Filipino: “You’re gonna make my father Plan B? It’s sad to be a backup plan. We’ve never been one to turn down support, but we’ve never been the kind of family that is just a backup.”

The context of Sandro’s statement was Ria’s public endorsement of Go’s presidential bid. The Fariñases are running under the ruling, albeit fragmented, PDP-Laban.

Sandro’s statement was taken by some here as a rookie move, since while the two political dynasties are rivals, they are also, in many ways, allies. Stories abound on who gave way to who in which elections.

Pre-campaign period, Ria told a local news outlet that Sandro gunning for her seat when the Marcos family already controlled the Capitol, the Laoag City Hall, and the 2nd congressional district, was just plain greed.

Ria was a provincial board member before she ran and won the congressional seat in 2019. While Sandro is running for an elective post for the first time, he said he didn’t agree that Ria is more experienced than him.

“I wouldn’t actually agree on that. She became a congresswoman in 2019 and I started working there in 2019, under the office of the Majority Leader, which actually gives you an encompassing view of how the House works, how the lower House works as a body,” Sandro said on the sidelines of the Team Marcos local kickoff rally on Friday. He insisted on answering questions from reporters as the family’s media officers tried to cut the interview several times.

Sandro worked under his uncle, House Majority Leader Martin Romualdez of another dynasty – the Romualdezes of Leyte.

Team Fariñas did not hold a rally on Friday, and Rappler had been trying to set up interviews with the group as well. We will update this story once we get their statements.

Sandro said that there were no talks with Team Fariñas, even after the Duterte wing of PDP-Laban already endorsed the presidential bid of his father.

“There are no plans. We all know that prior to the withdrawal of Senator Bong Go, they voiced all-out support for him. With regards to developments on that, I have not heard anything. Frankly, I am not privy to the national goings on, I’m just focused here in Ilocos,” said Sandro. 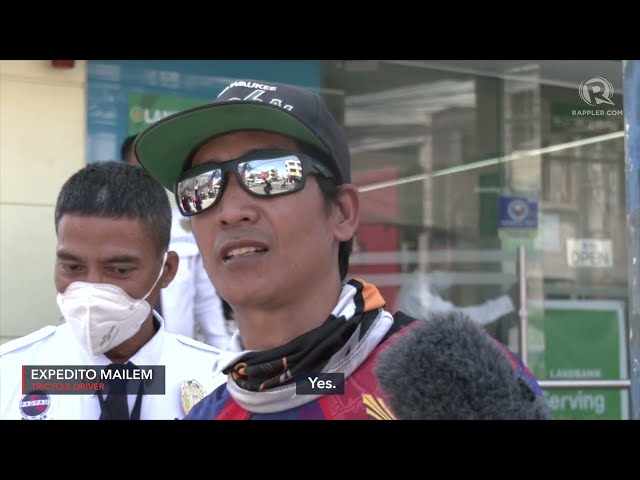 Studies have shown evidence that regions with more dynasties tend to have a higher poverty rate. But an anti-dynasty bill has always had dim prospects in Congress, which is full of dynasty spawns.

The thing is, in the First District, it’s only a choice between two dynasties – Marcos or Fariñas. It’s the same in the gubernatorial race, you either choose Marcos Sr.’s grandson Matthew, or you choose Rudy, Marcos Sr.’s ally who helped keep Ilocos Norte their turf even while the Marcoses were in exile.

Among young progressive Ilocanos who reject the Marcoses, it’s a very tough choice, because the other option is for them also a symbol of what is wrong with Philippine politics – that it’s mostly a family enterprise.

“As you all know I had no intention to run for governor of Ilocos Norte, and now standing before you three years later…. To be honest, as years have passed, I have fallen in love with Ilocos Norte and I believe we have much more work to do,” said Matthew. His mother was not at his rally, the senator was at the Zamora kickoff in San Juan City, the Metro Manila residence of the former first family.

Matthew ran unopposed in 2019 because Rudy backed out at the last minute. The last time there was an actual contest here for governor was in 2010, when Imee beat her cousin, former governor and now Laoag City Mayor Michael Marcos Keon. In 2013 and 2016, Imee ran unopposed.

Then you have Keon, who had told his constituents on Facebook the story of how the Marcoses made him run for Laoag City mayor in 2019. Keon’s win in 2019 completed the Marcos domination, because he took Laoag City Hall, the longtime turf of the Fariñas family. In the 2022 elections, Fariñas’ niece-in-law, former mayor Chevylle Fariñas, will try to regain her seat.

But Team Marcos is not supporting Keon, choosing to endorse Keon’s mortal enemy, Vice Mayor Vicentito Lazo. In Laoag City though, there are posters of Keon with Marcos Jr. but on stage, it was Lazo’s hand that Marcos Jr. raised.

Asked where Keon was as Team Marcos held a rally at the Capitol just beside the Laoag City Hall, Sandro said: “I have no idea. You’re gonna have to ask him.”

For the post of Laoag vice mayor, Team Marcos is fielding Ameurfina Respicio who has a good reputation as a lawyer here, but is perceived as less winnable compared to her younger opponent, Fariñas’ son Carlos, a barangay chairman.

Security guard Elmer Dacumos said that in the local elections, he is “solid Fariñas.” Speaking in Ilocano, Dacumos said, “I would have appreciated if [Sandro] ran for councilor first, to begin small.”

Vendor Jessa Mae Labuguen said she would choose Matthew over the more veteran Fariñas. Why? “I always watch his Facebook Live, so I see a lot of good things that he does, so I like him,” she said in Ilocano.

Team Fariñas is pressing flesh, doing house-to-house campaining, and visiting communities. Team Marcos has to be visible too if it wants to win, says political scientist John Paul Castro, an instructor at the Laoag-based Northwestern University.

“The young Marcoses have to go out and show themselves. They have to be more visible so that people remember them. Ilocanos are not only thinking about the national elections,” said Castro.

Visibility and on-ground campaigning also have a lot to do with which mayors are on your side. They are the ticket to penetrating towns, either by doing personal visits or just putting up posters.

They were endorsed by reelectionist 2nd District representative Angelo Marcos Barba, Marcos Jr.’s cousin; and reelectionist Vice Governor Cecilia Araneta-Marcos, the widow of another cousin, the late Mariano “Nonong” Marcos II. Overall, there are five Marcos family members running in the local elections, including Keon who is not part of the Team Marcos slate.

Mayoral rivals Edward Quilala and Glady Go Que (Currimao), Raphael Benemerito, Maja Sales, and Pago Garvida (Pagudpud); and Larissa Foronda and Amado Victor Racimo (Vintar) did not appear on stage but were acknowledged by the event’s host for their support for the Team Marcos slate. None were acknowledged from Solsona town.

If based on that, the Marcos enterprise still reaches far and wide. Besides, in the last 50 years, Fariñas was the only non-Marcos to be Ilocos Norte governor.

Because here in this side of the North, the family of the dictator this country ousted 36 years ago can proclaim: Marcos idi, Marcos latta, nangnangruna itan.