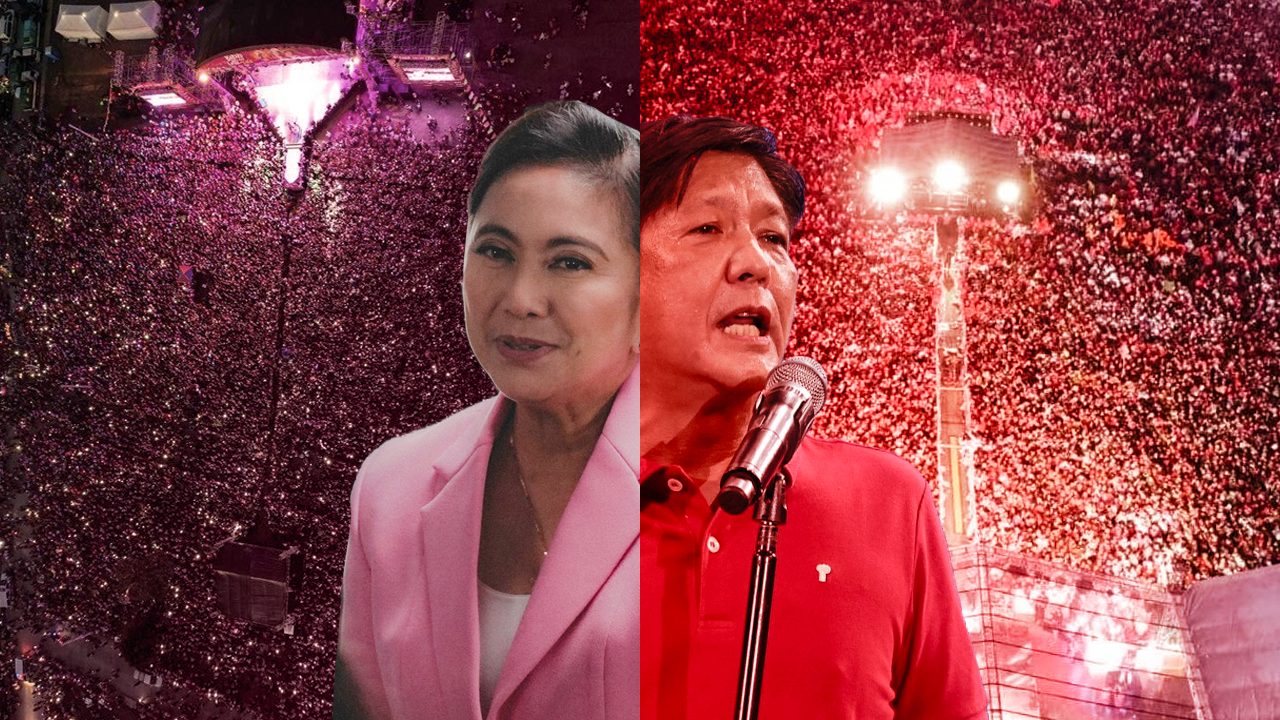 MANILA, Philippines – The two top candidates vying for the presidency on May 9, 2022, will end months of campaigning in the country’s seat of power: the National Capital Region.

On May 7, Bongbong Marcos Jr., running mate Davao Mayor Sara Duterte and their Senate bets – the de facto administration slate – will hold their final miting de avance in Parañaque City in front of Solaire, a posh resort and casino.

Senator Manny Pacquiao, who placed third in the latest Pulse Asia voter preference survey, will go home to General Santos City for his final campaign rally. Manila Mayor Isko Moreno, himself an outgoing chief executive from Metro Manila, will stage his miting de avance in Moriones, Tondo. Senator Ping Lacson will hold his miting de avance a day earlier than his rivals in Cavite, although he had originally planned to hold it in Plaza Miranda on May 7, too.

In the Philippines, the miting de avance is traditionally the final campaign event for candidates running for both local and national posts, held two days before election day. In the case of the 2022 elections, campaigning stops on May 7, with election day on May 9.

The choice of where to hold one’s miting de avance varies. In the case of Pacquiao, Moreno, and Lacson – three candidates who’ve trailed in opinion polls – their roots dictate where their 2022 campaign ends. Pacquiao, a champion boxer, grew up poor in General Santos. For Moreno, a celebrity-turned-politician who once collected garbage in Tondo, the 2022 miting de avance is a homecoming of sorts. Lacson, too, traces his roots to Cavite.

But for the two leading candidates, the decision is no doubt more strategic than nostalgic.

Parañaque, where Marcos Jr.’s final rally will take place, is home to just over 346,000 voters while Makati, Robredo’s pick for her miting de avance, is home to over 458,000 registered voters. But that alone doesn’t explain why NCR is an easy choice for national candidates to end their campaigns.

The National Capital Region is the second most vote-rich in the Philippines, with over 7.3 million voters in 2022. And while it’s nearby Calabarzon that’s the most populous voter-wise, Metro Manila is still where most campaign headquarters are located, and where campaign resources are most abundant.

Campaign veterans also point to one other thing that only Metro Manila offers: proximity to the center of political power and national media.

Why does that matter? Beyond being a send-off for candidates, the miting de avance is the final show of force – the kind you want amplified on the news media and even alternative media channels.

Ahead of their May 7 rallies, both Marcos Jr. and Robredo have toured the Philippines one last time. For Marcos Jr., it’s through a series of rallies across the three major island groups – Guimbal in Iloilo for the Visayas and Tagum in Davao del Norte for Mindanao, before Parañaque City in Luzon.

Robredo had made several stops across different regions and islands but will be going home to her home region, Bicol, before she returns to Metro Manila for the miting de avance.

Most incumbent mayors in Metro Manila who have openly endorsed a candidate are backing Marcos Jr. and Duterte, including Edwin Olivarez, who is the mayor of Parañaque City. Makati Mayor Abigail Binay, the incumbent of Robredo’s host city, has not endorsed a presidential candidate. Her father, former vice president Jejomar Binay, is a guest candidate in Robredo’s slate but has not shown up to any of her campaign rallies.

The two venues have a mix of history to them. In Marcos Jr.’s case, it’s recent.

Parañaque was supposed to be host to what was then touted as a grand rally for the Uniteam – at around the same time Robredo was drawing crowds of tens of thousands back-to-back. But that rally was postponed after the heavy rain drenched the crowd and affected the power supply of their sounds and lights system.

For Robredo’s miting de avance, the story goes further back in history to the early 1980s when the dictator Marcos, her chief rival’s namesake and father, was still in power.

In September 1983 – three years before Marcos was ousted from power through the People Power Revolution – thousands of people in Makati walked out of their offices mid-afternoon to protest the assassination of Benigno Aquino Jr., an opposition lawmaker who had been jailed before fleeing to the US for medical treatment. He was shot on the tarmac of what is now the Ninoy Aquino International Airport upon his return to the Philippines.

A Washington Post report from 1983 goes: “The action by office workers was unprecedented. Leaflets, which called for other workers to fill the streets and join a ‘march for justice’ for the slain former senator, crowded into the main Ayala Avenue from high-rise buildings where banks and financial institutions are located.”

Yellow confetti, the symbol of resistance then, rained over Makati during the walkout. (READ: Who were really behind Makati’s yellow confetti rallies?)

Yellow was once Robredo’s campaign color, but she shifted to pink in 2022 as an independent candidate. She is still, however, chairman of the Liberal Party, whose color is yellow. The “laban” sign is also in full use in the Robredo campaign, although it’s flashed now by supporters in pink. Robredo’s campaign hopes for a record-breaking crowd for their Makati rally.

But Marcos Jr. used to be more dominant – in March, his voter preference rating in NCR was at 64% while Robredo’s was at 17%.

Robredo’s volunteers are abundant in Metro Manila and have, since February, been devoting their time to house-to-house campaigning. Her 9 percentage point rise, beyond the plus minus 4% error margin, could be thanks partly to her volunteers. (READ: The Pink Wave: Robredo’s volunteer movement defies traditional campaigns)

To be sure, both campaigns have held rallies – big and small – several times in the campaign period. One of Robredo’s first surprise huge crowd turnout was in Quezon City, right after the official campaign period started. Marcos Jr. had joined at least two big campaign rallies in Quezon City as well. His running mate, Duterte, while also gracing big rallies, typically spends time in smaller gatherings and caucuses in Metro Manila, usually with barangay and community leaders.

For the rest of the country, it’s also Marcos Jr. and Duterte who have dominated, also according to Pulse Asia’s last preference survey for the 2022 election cycle. At least 56% of voters who were surveyed by Pulse Asia said they would choose Marcos Jr .for president while only 23% of those surveyed said they would choose Robredo if elections were held during the survey period, April 16 to 22.

Marcos Jr. and Duterte’s survey numbers have been dominant since they announced their alliance.

The Robredo campaign is banking on its momentum – typified by crowds, both in bailiwicks and in enemy territory, the Vice President’s steady rise in preference numbers, and their vast network of volunteers (the Robredo People’s Council) – for a path to Malacañang.