MANILA, Philippines – The recently uncovered sale of the Divisoria Public Market, a strip frequented by wholesalers and vendors, became the source of criticism among bets during the Manila Mayoral Candidates Forum on Wednesday, April 6.

The controversial sale transferred ownership of 3,701.70 sqm property from the City of Manila to Festina Holdings Inc, a private company based in Ermita. The Manila City Council, which is presided by Lacuna, authorized Moreno to approve and complete the said sale where a 50-storey building will be built in place. The vendors will be transferred to Pritil Market.

The public wet and dry market, where thousands visit in droves to buy assorted wholesale goods and fresh produce, was sold for P1.446 billion last August 2020. However, according to vendor leaders, they were only made aware of the sale last August 2021, when they requested documents from the city council. Moreno has publicly defended the move saying that the money will be used to fund the city’s pandemic housing and healthcare programs.

Lacuna is running for Manila mayor under Aksyon Demokratiko, which is carrying the incumbent Moreno as its presidential candidate for the 2022 elections.

Bagatsing, in his opening statement, called the sale “highly questionable, unlawful, and void” for its failure to comply with the procedures in the law. ”It is an utter disregard of the constitutional rights of vendors to the due process of law,” the former congressman said.

“We’re already trying to file an annulment case and possible plunder case,” said the scion, who is also against the P1.7B beautification project of the Manila Zoo and other property sales by the incumbent duo. “13,000 [pesos] per square meter is a highly unconscionable price.”

The candidates cited that a lack of transparency and integrity went in on the sale, and made comments on the absence of Lacuna, the frontrunner in the fight for Manila mayorship. 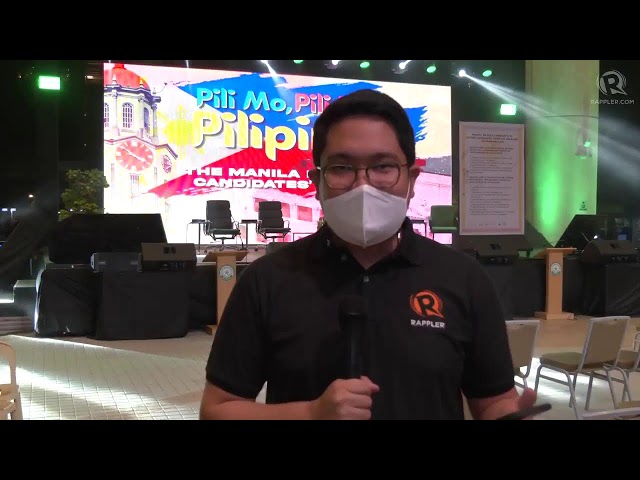 Lopez promised to redirect resources, uphold honest governance, and implement a “maka-tao” (people-centered) brand of leadership to achieve his so-called “city of dreams”. Rather than prioritize projects like infrastructure projects, he said he will focus on social programs to provide food, healthcare, and livelihoods for the marginalized.

Meanwhile, Bagatsing and Jamias stressed the importance of transparency and accountability in leading the city’s top spot.

“Pagka-mali, managot. Kapag gumagawa ng tama, bigyan ng insentibo. Check and balance,” said Jamias. He will also prioritize people empowerment and participation, saying that he will “go down to every district of the City of Manila” once he is elected.

Bagatsing seeks to bring back Manila’s former glory, promising to bring back “excitement” to the country’s capital so it can compete with its neighboring cities. He will prioritize clean and green programs, deliver better access to health services, and expand the city to entice businesses to offer more jobs.

A tough job ahead

Bagatsing, Lopez, Lacuna, and Lim Raymundo all hail from political clans whose families have held positions in the two top seats in the city.

Bagatsing served as the congressman for the city’s 5th district for 20 years or 6 terms. He faces off against Lacuna again, for the mayoral seat this time, as he previously lost to her for the 2019 vice mayoral seat. He is currently running under the KABAKA party and is endorsed by President Rodrigo Duterte.

Meanwhile, Lopez is the eldest son of former Manila mayor and ex-chairman of the PNOC-Exploration Corp, Gemiliano “Mel” Lopez. Though his father was a staunch opposition figure during the martial law years, the lawyer is the official candidate of the Partido Federal ng Pilipinas under Bongbong Marcos.

Jamias, a first-time politician, grew up in Paco and served Manila’s districts as a police officer until his retirement in 2017, while Lacuna, Isko’s right-hand and whose father taught the actor the political ropes, has provided allowance, door-to-door consultations, and housing projects for Manila residents. – Sabrina Joyce Go/Rappler