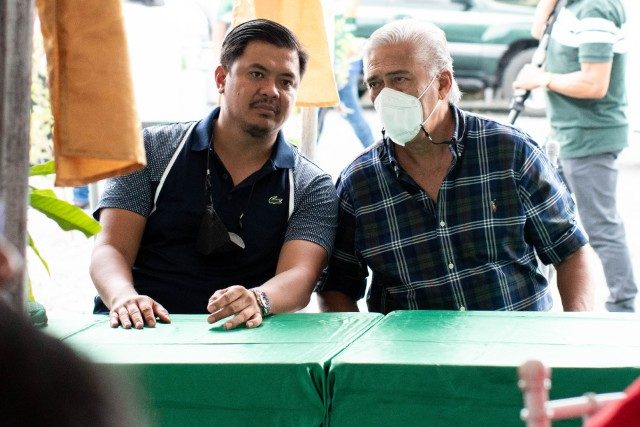 Facebook Twitter Copy URL
Copied
The show of support for Sotto comes from members of the Garcia family's One Cebu party, who earlier endorsed the Marcos-Duterte UniTeam tandem

CEBU, Philippines – Several mayors in Cebu’s 7th Congressional District, a bailiwick of the Garcia dynasty, met with Senator Vicente “Tito” Sotto III and said they would support his bid for vice president on Friday, April 29.

Sotto appeared at an event in Dumanjug town to thank the mayors of southern Cebu.

When asked by reporters on the sidelines of the event if the mayor’s support was an “endorsement” for vice president, Sotto said, “Yes, they gave me to the commitment that all of them would be supporting me for vice president, the entire 7th District.”

When reporters asked Dumanjug Mayor Gungun Gica and Cebu 7th District Congressman Peter John Calderon if the meeting with Sotto was an endorsement, they did not say categorically if it was.

Dumanjug is the hometown of the Garcia dynasty.

All of the incumbent officials of this district are from the ruling party One Cebu, led by Governor Gwendolyn Garcia.

The mayors diverted from their party’s endorsement of Davao City Mayor Sara Duterte for vice president.

Garcia previously promised the Marcos-Duterte tandem a win with a greater margin than the 2016 victory of President Rodrigo Duterte in the province.

Incumbent mayors and vice mayors from localities in the following town were a part of the meeting:

Sotto explained that although the local officials who attended, including the town councilors and barangay captians from these towns, are members of the One Cebu, his ally Calderon is a member of the Nationalist People’s Coalition.

Prior to this, Sotto’s only other endorsement was from Cebu City’s Osmeña family and its local party Bando Osmeña Pundok Kauswagan (BOPK).

The meeting was held at the home of Gica.

During the meeting, Sotto promised to push for another P1 billion in funding for agriculture, livelihood and infrastructure development per province on top if its internal revenue allotment.

Gica, a member of One Cebu, openly declared on April 21 that he is supporting the bid of Vice President Leni Robredo. – Rappler.com